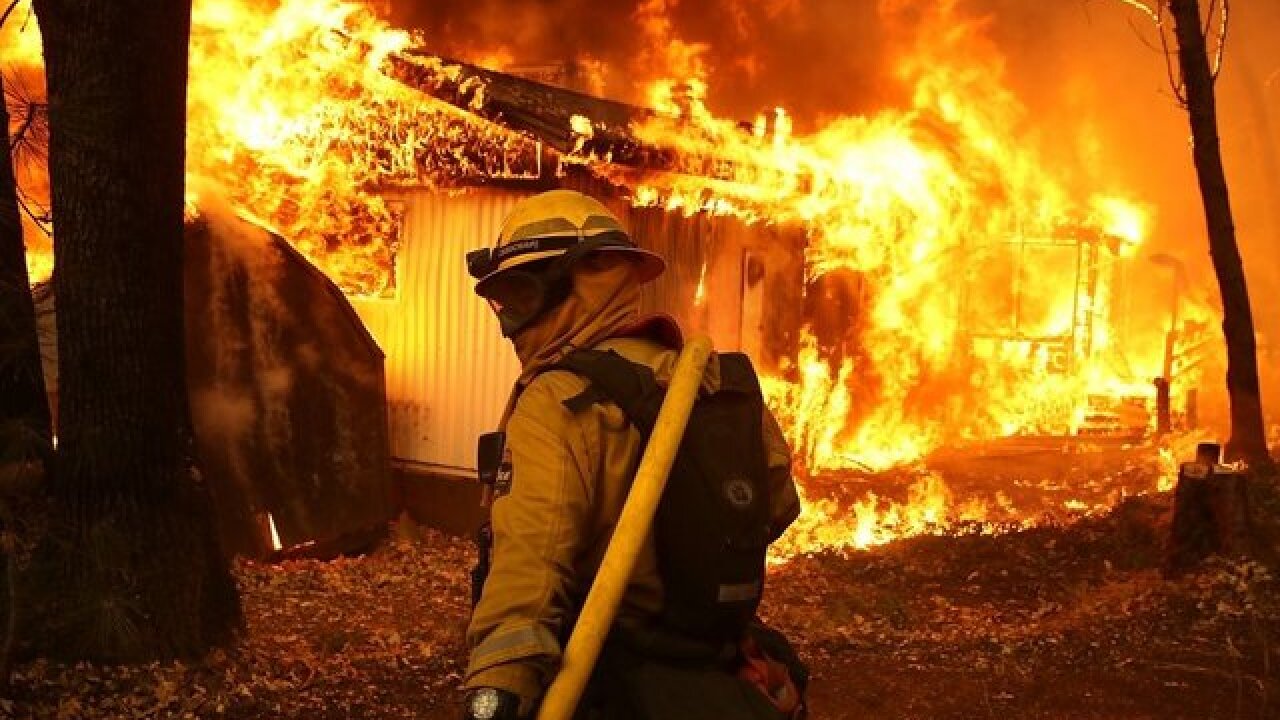 CHICO, Calif. (AP) — Amber Blood got to Chico on Nov. 8, 2018, wearing pink slacks and her favorite white peacoat. It was all she had left.

Blood was among tens of thousands forced to flee as a wildfire roared through Paradise and nearby communities in Northern California, killing 85 people and destroying roughly 19,000 buildings.

Nothing burned in Chico, the closest big city. And within hours, another city had moved in — filling up hotels, living in trailers, sleeping on friends' couches and buying up every available home, apartment and spare room.

"We all feel lost, still," said Blood, who has since bought a home in Chico. "This house is beautiful, and I don't even feel like it is my home. It's weird."

What's happened in Chico in the year since California's deadliest wildfire shows how blazes — growing more frequent and destructive with climate change — have lasting effects far beyond the flames.

"You normally would have a decade to prepare for such growth," Chico Police Chief Michael O'Brien said. "We had about 10 hours."

Chico officials say they need close to half a billion dollars to improve infrastructure and hire enough police officers and firefighters to cover the surge in people. But because the city is outside the burn area, it isn't eligible for most state and federal disaster funds. The most it's gotten is $3 million from the Legislature.

Aside from housing shortages and more traffic, the influx has strained the city in unexpected ways. About three weeks after the fire, Chico's sewer system was handling an additional million gallons (4 million liters) a day, or the equivalent of adding an extra 5,000 homes.

City officials had hoped the increase was temporary. But now, the system is handling an additional 600,000 gallons (2.3 million liters) a day from fire survivors, costing an extra $53,000 per month. That's money Chico doesn't have.

City Manager Mark Orme says Chico will likely have to raise rates to pay for it.

"It's one of the unanticipated consequences of being the friendly neighbor," he said.

The effects go beyond government services. The region had four hospitals before the fire. But Feather River Hospital in Paradise closed and has not reopened. Since then, Enloe Medical Center in Chico has seen up to an extra 700 patients per month, according to Judy Cline, director of the emergency department.

The hospital has added seven around-the-clock nursing shifts to keep up, but it's having trouble filling the positions because potential employees can't find places to live.

Even before the fire, Chico's home sales vacancy rate was below 1%. Along with hospital workers and others, former Paradise residents have struggled to find a place to call home.

Laura Smith and her family had 2 acres in Paradise. Now, they live in a small apartment where the neighbors complain if you shut your door too hard. She dreams of moving back.

"We're in Chico, but we're Paradise residents," Smith said. "There is something separate about us."

It was even hard for Blood, a real estate agent in Paradise, to find somewhere for her and her children.

They lived in a cramped, two-bedroom apartment for months. It was unfurnished, but shopping was exhausting. The first thing she bought after the fire was an expensive fake plant because it was one of the few things left in the store.

When Blood finally bought a house a few months later from a woman who was moving overseas, she said she paid the seller an extra $7,000 to leave the furniture.

"We literally walked in, the house was ready to go," Blood said.

Gov. Gavin Newsom signed a law this summer designed to speed up construction of new housing by temporarily suspending the state's lengthy environmental review process for fire-affected areas. But the law does not include Chico because Mayor Randall Stone and most of the City Council opposed it.

Some residents were so angry they launched an effort to remove Stone and another councilman from office. Stone said he is "beyond confident" the recall won't succeed, saying the state law would strip authority from local governments and was an attempt by Republican lawmakers to dodge environmental protections.

The mayor said he plans other actions to address the housing crisis, including adjusting fees for developers so they build more affordable housing. He said he was proud of Chico for coming together to help.

"We didn't literally have fire on our homes in this community, but we're impacted by it," Stone said. "We're all burdens on each other."

The recall has added to tension in the community, compounded by small things like longer wait times at restaurants and heavier traffic.

But Chico residents are careful when they complain, said Katy Thoma, president and CEO of the Chico Chamber of Commerce.

"We're trying to be sensitive to the people in Paradise who lost everything," Thoma said. "Chico is a real friendly, warm town, and it's the kind of town where you don't honk at people when the light turns green. You let people in. There seems to be less of that."

All of these are signs of a city getting to know itself.

"I don't think we know what the new normal is," said Alexa Benson-Valavanis, executive director of the Chico-based North Valley Community Foundation, which has given $27 million in grants since the fire. "But we're figuring out how to take care of everybody here. I think we have a heart and a will to do that."