21 horses died at a single racetrack in the last 10 weeks. How did it happen? 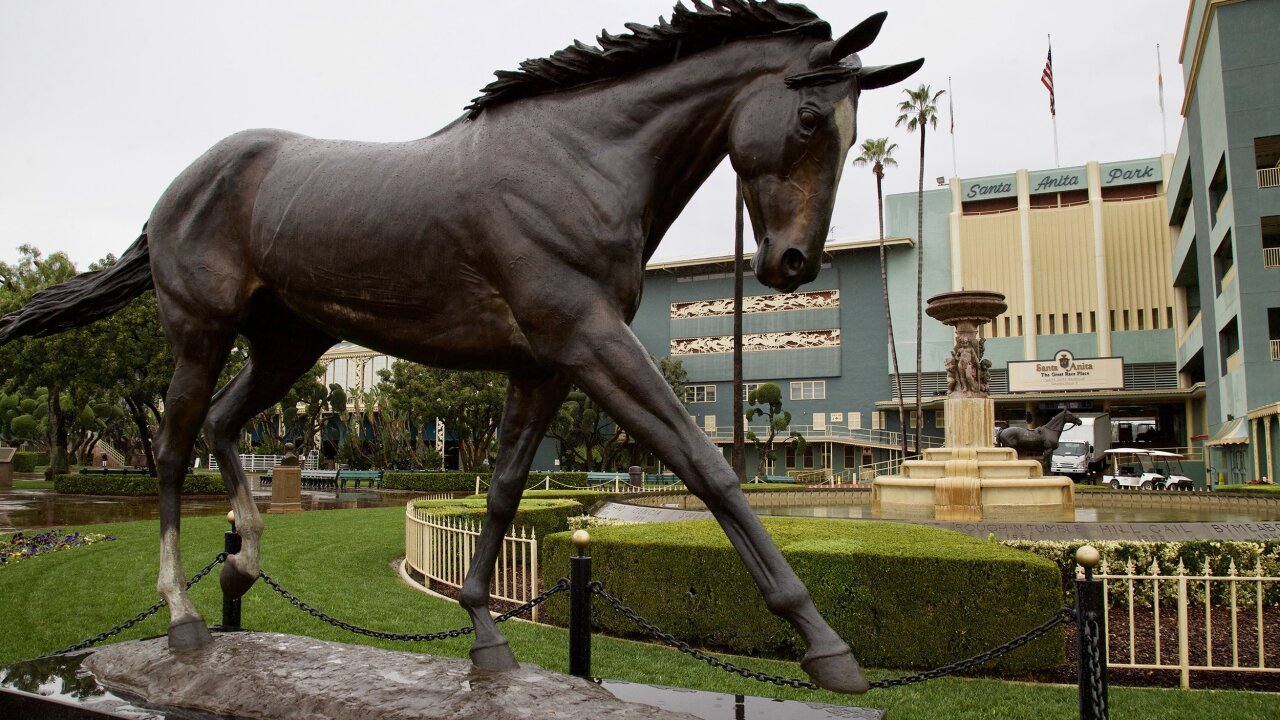 Debbie McAnally's horse became the 21st to die this season at Santa Anita Park, euthanized after shattering her front leg on a training run.

McAnally wistfully remembers the 3-year-old filly. "I picked her name 'Let's Light The Way' because she was an almost white thoroughbred and had this way about her," she said, "the elegant way she walked."

The horse's death led to the indefinite closing of the famed southern California raceway, as a team of investigators try to figure out why so many animals have died in just ten weeks. Last year, 10 horses died at Santa Anita over the same period.

Necropsies on the animals are being conducted, but it could be months before the results are in.

Trainers, owners, track officials, and animal activists are all baffled as to why the death toll is so high.

A spokesman for the track, Mark Willman, believes the injuries are "multifaceted," but that rain is the biggest factor.

Why rain could be a factor

Southern California has been having its wettest winter in almost a decade.

Many people connected with Santa Anita Park believe that the rain is a factor in the horses' deaths, but not all agree why.

"The ground gets too soft," says Jim Cassidy, president of the Thoroughbred Trainers Association.

He says the track was to blame for a catastrophic injury that led a 5-year-old horse he trained named Amboseli to be put down.

In preparation for storms, a sealant is used keep the surface from washing away. But Cassidy claims that once the rain is over, the track "is too hard."

Cassidy has been pushing for a synthetic track to be returned to Santa Anita after it was ripped out in 2010, because it was becoming difficult to maintain and had drainage problems.

A week before the track announced it was suspending operations, it closed for two days so a soil expert from the University of Kentucky could look for trouble.

He didn't find any. Professor Mick Peterson tested the slipperiness of the surface, how much give there was when the hoof hits the dirt and how much spring the track gives back. He looked at the composition of the silt, clay and sand that make up the track. "The main thing is consistency," he said.

Peterson is as perplexed as everyone else -- but, like Southern California drivers unaccustomed to driving in wet conditions, Peterson suggests that the trainers and track officials may be unaccustomed to dealing with so much inclement weather.

Additional testing with a veteran track expert will now use a machine Peterson invented, the Orono Biomechanical Surface Tester, that mimics the response of the front leg of a racehorse at a full gallop.

Peterson's findings are now a part of a larger review underway.

"It's like the National Transportation Safety Board coming in after a plane crash and piecing everything together," he said. And like the NTSB review, it could take months.

Could drugs be involved?

California racehorses undergo rigorous drug testing -- both for the presence of performance-enhancing drugs, and to see whether the animals are being given excessive quantities of anti-inflammatory drugs.

Trainers are permitted to give the horses limited quantities of anti-inflammatories.

Though no one associated with the track has identified drugs as a potential factor, animal activists have long complained that the use of painkillers leads to injured horses being raced.

Protestors have lined up outside Santa Anita calling for a ban on drug use. Kathy Guillermo, a vice President at PETA, told CNN she's been in contact with Santa Anita about conditions at the track.

Guillermo believes the weather is a factor and applauds California's existing medication protocols, acknowledging that tighter restrictions have led to a 60% drop in horse fatalities over the past decade in California. Still, she believes no drug use should be permitted.

McAnally, owner of Let's Light the Way, says her horse was not on any drugs at the time of her injury.

Are the horses being run too hard?

Guillermo wonders if the track might be racing too many horses that are no longer up to the grueling schedule.

"I do think we are seeing an attempt to fill the race cards, keep all the races full of horses," she says.

Cassidy, who currently trains 40 horses, says some older animals -- some of them 6, 7 and 8 years old -- are being raced. But none of the 21 horses that were euthanized were that old.

The closing of the track comes at a bad time for horse racing. Santa Anita was to host the San Felipe Stakes on Saturday, a prep race for the Kentucky Derby. It's unclear when the track will reopen.

Guillermo said that's only right. "It's basketball season. If we were seeing 21 players drop dead, the spot would not be going on," she said.

Cassidy, who has been training horses at Santa Anita for 38 years, says the mood is somber.

"Everyone cares about their animals," he said. "We wouldn't do this, getting up at 4 in the morning seven days a week, if we didn't love these animals."

UPDATE: After the 23rd horse died at Santa Anita Senator Diane Feinstein release a statement on April 2nd that read in part, "I believe that racing at Santa Anita should be suspended until the cause or causes of these deaths can be fully investigated. I also ask for more information about what the California Horse Racing Board is doing to both investigate this matter and address some of the concerns that these incidents have rightly raised.”