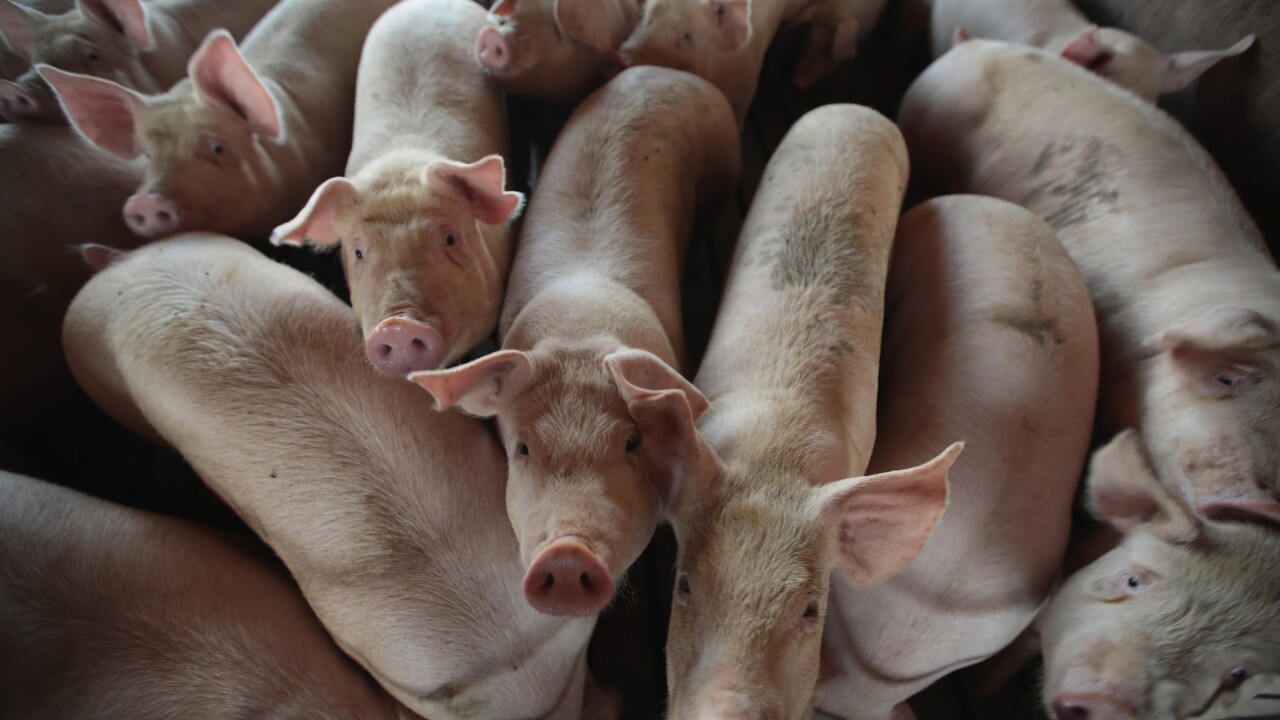 Scott Olson/Getty Images
OSAGE, IA - JULY 25: Hogs are raised on the farm of Ted Fox on July 25, 2018 near Osage, Iowa. According to the Iowa Pork Producers Association, Iowa is the number one pork producing state in the U.S. and the top state for pork exports. The state sends about 50 million hogs to market each year and its pork exports totaled more than $1.1 billion in 2017. Pork producers in Iowa are bracing for the impact a trade war with China and Mexico may have on their bottom line going forward. (Photo by Scott Olson/Getty Images)

LOS ANGELES (AP) — The pork industry is challenging the constitutionality of a voter-approved California measure that will prohibit the sale of meat products from hogs born to sows confined in spaces that don’t meet new minimum size requirements.

A lawsuit filed late Thursday in San Diego federal court by the National Pork Producers Council and the American Farm Bureau Federation targets Proposition 12, which voters overwhelmingly passed a year ago and goes into effect in 2022.

“Proposition 12 has thrown a giant wrench into the workings of the interstate market in pork,” the filing states.

The measure bans the sale in California of pork and veal from farm animals raised in conditions that don't meet its standards. It also requires that all eggs sold in the state come from cage-free hens.

The rules will apply to pork products coming to California from farmers nationwide, not just from in-state farms. The industry lawsuit contends that extraterritorial reach intrudes on authority given to Congress.

The ballot measure, dubbed the Prevention of Cruelty to Farm Animals Act, was sponsored and financed by the Humane Society of the United States.

The lawsuit was termed “frivolous” in a statement from Jonathan Lovvorn, the Humane Society's senior vice president for animal protection litigation.

"It’s an industry out-of-step with the preponderance of consumers who find animal abuse unacceptable, yet is still trying to hold on to archaic practices — like those banned by Prop 12 — that inflict an immense amount of pain and suffering on animals,” he said.

It also bars the use of individual stalls that do not meet “stand-up, turn-around” requirements, except during brief periods prior to farrowing and during weaning.

The lawsuit states that the measure's requirements “are inconsistent with industry practices and standards, generations of producer experience, scientific research, and the standards set by other states.”

It also imposes “enormous costs” on pork producers that will ultimately increase costs for consumers, it says.

Before the election, the nonpartisan state Legislative Analyst's Office said Proposition 12 would likely result in an increase in prices for eggs, pork and veal partly because farmers would have to remodel or build new housing for animals.

It could also cost the state as much as $10 million a year to enforce and millions of dollars more a year in lost tax revenues from farm businesses that choose to stop or reduce production because of higher costs, the office said.

According to 2017 U.S. Department of Agriculture data cited in the lawsuit, nearly 65,000 farms nationwide sold hogs that year with a market value of more than $26 billion. Pigs are raised nationwide, but production is concentrated in the Midwest and North Carolina.

California's pork consumption accounts for about 13% of the national market. But the state has only about 1,500 commercial breeding sows and needs the offspring of about 673,000 sows to satisfy its residents' annual demand for pork meat, the lawsuit states.