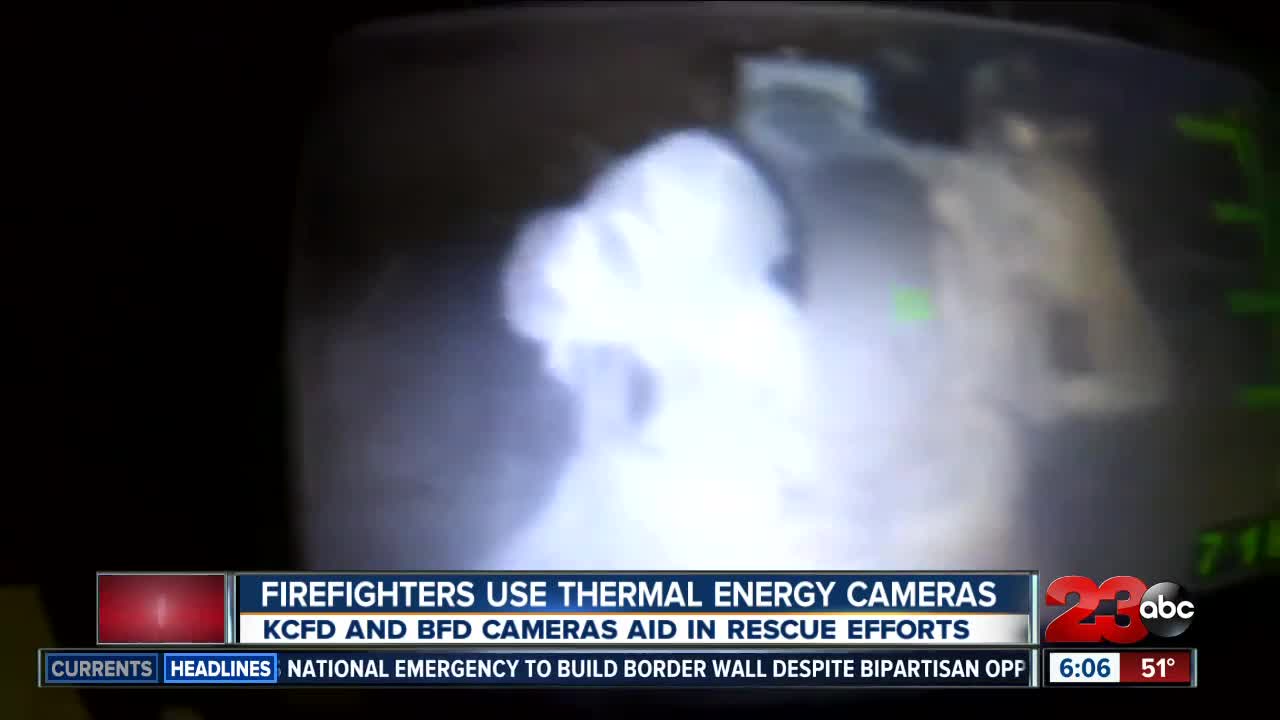 BAKERSFIELD, Calif. — Both the Bakersfield and Kern County Fire Departments agree, thermal imaging cameras are taking their rescue efforts to the next level.
23ABC News took an in depth look to show viewers at home how they work and why firefights said they are essential tools.

Across town on Thursday February 14, in an empty building firefighters from the Kern County Fire Department and the Bakersfield Fire Department geared up for a drill where they practiced rescuing a trapped firefighter. Simulated smoke was used to fill up the entire building to make visibility nearly impossible for firefighters.

However, the firefighters also used another tool besides team work to help locate the staged firefighter in need of help, "One of the tools that we use is a thermal energy camera. These work off of infrared signatures which allow us to see images that are based off of heat. So in an area that normally is dark you could just use a flashlight no problem," Kern County Fire Department Engineer and Public Information Officer Andrew Freeborn said. Freeborn said in areas filled with smoke it presents different challenges, "You can't see even with a flashlight so using these thermal energy cameras allows us to find individuals that are distressed. It allows us to actively and quickly and efficiently find and rescue people in fires"

Freeborn said the cameras will show if a person is standing in front of you or several feet away from you because it detects body heat as well, making coordination for rescue efforts more seamless.

According to Freeborn the cameras are available on every call to spot deceased and living victims. He said crews used them last week when officials were working to find a mother trapped in a home in Northwest Bakerfield as well.

Freeborn said thermal imaging cameras also let firefighters know how hot things are inside of a building with temperature gages on the screen. According to Freeborn the cameras can also help firefighters see through walls or in any other areas where fire sources are still trapped and they work on several different types of scenes, "During the overhaul fazes of a fire the thermal imaging cameras are also used to find heat trapped inside of walls, behind appliances.The thermal imaging cameras are also used on scenes of motor vehicle accidents, heat signatures can be found inside a car and you can actually count how many people were siting inside of a vehicle even if those people are still not around when you initially arrive on scene."

Freeborn said through the state homeland security grant program over the last several years they have been able to get more than $750,000 to ensure every crew and every rescue vehicle is equpt with a camera and Bakersfield Fire Department has also been arming their crews with cameras as well with the help of grant funding too, "These thermal energy cameras have really evolved you know they started out very big, clunky, tough to carry around in a fire or emergency situation and they've evolved into a small almost the size of a cell phone so they are very useful, very easy to use, we use them quite often."

Fire officials said typically the fire captain is the one with the camera in hand helping crews navigate but everyone is trained on how to use them during a scene just in case. Officials also said the thermal imaging camera technology is continuing to become more advanced and they hope to always have the best ones available for their crews