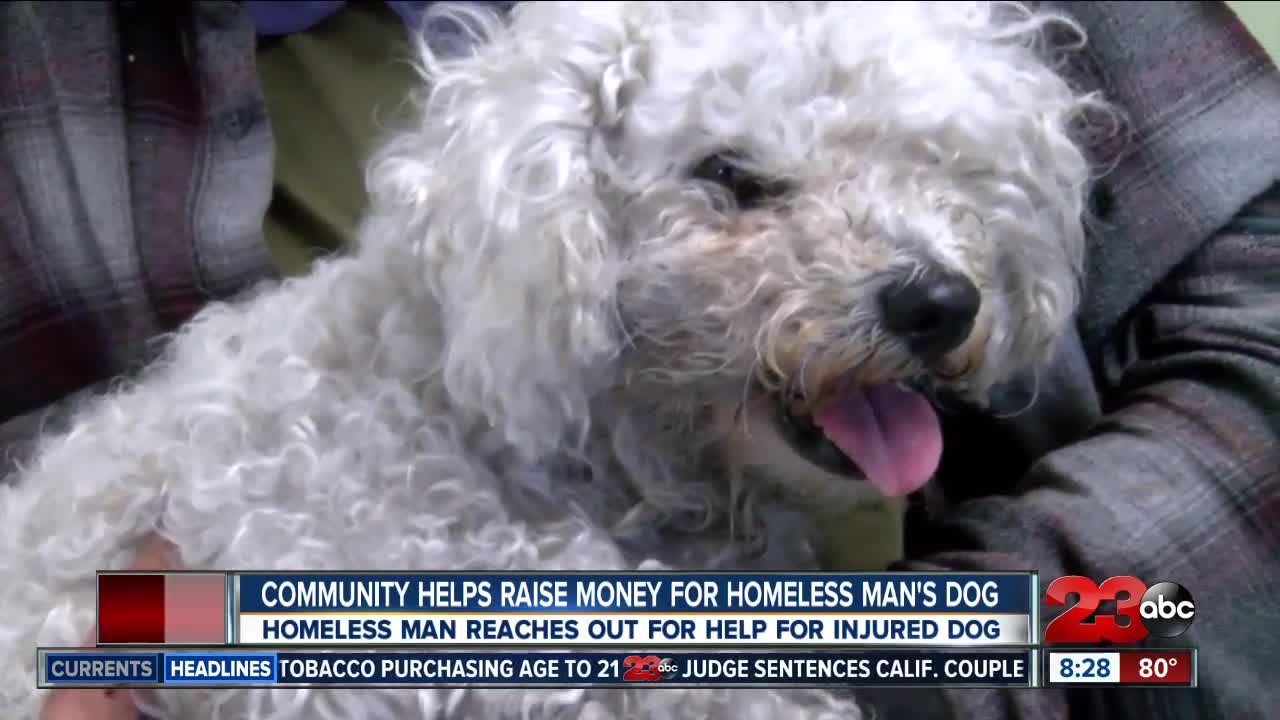 A dog who was hit by a car while crossing the street with her disabled owner is received support from the community Friday following the crash.

BAKERSFIELD, Calif. — A dog who was hit by a car while crossing the street with her disabled owner received support from the community Friday following the crash.

Richard Powell said last week he was crossing the street at the Panama Lane and southbound highway 99 exit when he was hit by a woman driver and was ultimately knocked out of his wheel chair.

Bakersfield Police Department confirmed the crash took place at the intersection, but officials said the woman driver told authorities that Powell was crossing illegally. Officials said they couldn't determine who was at fault.

Powell said the woman driver also ran over his dog Marley who hasn't been able to walk since, "You know the truck rolled on to her, you know like right here and it didn't go all the way over her but it crushed her insides and all that," Powell said.

Powell said when he was on the ground trying to get up he heard his dog Marley yelping, so he started crawling towards her on his stomach, “I went around the jeep and there she is stuck under the wheel,” Powell said.

Marley ate very little after, refused to put weight on her hind legs and had blood in her stool after the crash according to Powell.

Powell who has very little income and is homeless, eventually turned to Sue Bennett at the Kern Humane Society non-profit for support, “We help anyone who cannot afford to pay for a vet office call,” Bennett said.

Powell created a Facebook fundraiser and community members donated more than $400 to Marley to help pay for medical costs.

According to the Kern Humane Society Marley needed x-rays which can cost up to $600. In an effort to get Marley the support she needed, Bennett reached out to doctor Jensen at the Olive Drive Animal Hospital, “Dr. Jenson has been very good in helping with people who are very low income and they don’t have a lot of money to spend on their animal but they want to do something. He has been very good about taking them and giving them a chance,” Bennett said.

"Your dog has a broken hip so there are two options either the surgical option where you have to go in there an pin it or plate it and put the pieces back together. Or you could be conservative and give the dog rest for three weeks,” Dr. Jenson told Powell Friday.

As for Powell he said he is just thankful for the communities support for Marley, “Without everyone's help it wouldn’t have happened and so I believe this is going to turn out on a really good note she might have to have surgery here. In three weeks we will know more,” Powell said.

While reporters were waiting at the Olive Drive Animal Hospital the calls were pouring into the office from community members wanting to contribute towards Marley’s after care.

All costs were covered by the Kern Humane Society and the help of the community.