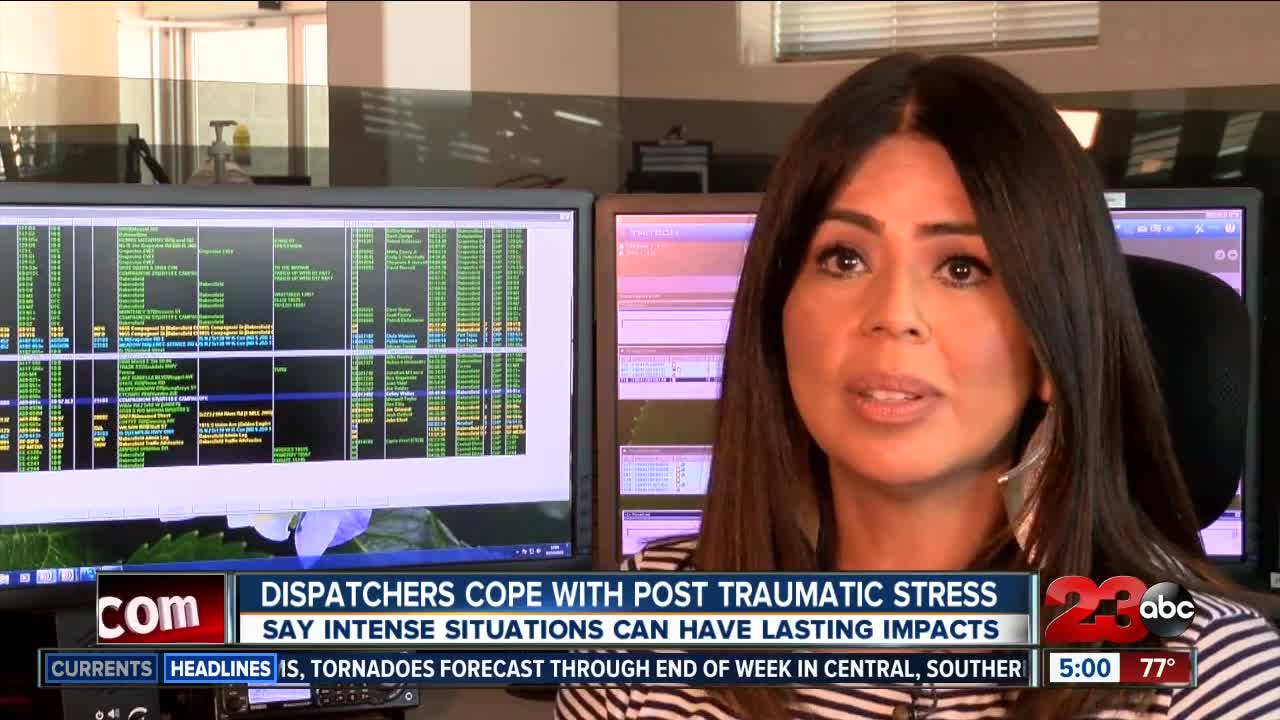 BAKERSFIELD, Calif. — This week law enforcement agencies all across the country are spending time showing gratitude to those who work in the telecommunication departments as part of their annual appreciation week.

However, what we don't always talk about is the post traumatic stress dispatchers and call takers are dealing with day in and day out during community member's darkest hours.

23ABC News took an in depth look Wednesday at how our hero's in headsets cope with some of the most difficult moments, "We take calls that have roll overs with fires and people trapped in the vehicle and that's a little bit hard to you know shake off, you're hearing people screaming and they're hysterical cause they are seeing it,"California Highway Patrol (CHP) Dispatcher of 18 years Cassandra Vidal said.

People like Vidal and Kern County Sheriff's Office (KCSO) Dispatcher Supervisor Tammy Olinger said while you are seeing it they are the ones who are listing to it, "After all the emergencies done is when I have that kind of sometimes have a melt down a little bit, whether it is just a moment to step outside the room, you know maybe shed a few tears, there's been a couple times where I've walked down the hall and sobbed,"Olinger said.

Although Olinger and Vidal both work for different law enforcement agencies in Kern County they both said they are dealing with the same type of everyday stress behind the scenes, "Ok just keep a safe distance what vehicle type is it?" Vidal said while taking an emergency call Wednesday.

One study conducted by the Journal of Traumatic Stress said the call most commonly identified as one of the worst for dispatchers to cope with is the unexpected injury or death of a child,"I mean we've had every type of call you can think of, usually the ones with children are always a little bit harder to digest."

Along with suicidal callers, "I was speaking to a woman who was in the Walker Basin area and the deputy's response time was 30 minutes and I stayed on the phone with her that entire time," Olinger said.

As well as shootings involving their coworkers, "I've had an officer involved shooting that was pretty intense," Vidal said.

Both departments said they provide tools for dispatchers and employees to cope through the post traumatic stress after they hang up the phone, "There is the employee assistance programs which is regularly available to all employees. We have the crisis intervention stress management (CISM) team, and then we have peer support," KCSO Commander of the Personnel Division Doug Jauch said.

Both women agreed the (CISM) team or critical incident management unit along with support from coworkers plays an integral role in their mental stability at work, "Cause a lot of times it's just that short talk with somebody who empathizes or maybe has prior experience," Olinger said.

They also said the debriefing process after a traumatic call is extremely helpful, "It's closure..it's very tough to start an incident and you don't know how it unfolded, how it ended, or what details. We're on this end, we're inside, we're safe we don't know what happened on the other end. So it's good to kind of piece a story together," Vidal said.

They both also said they push through it for more than just the appreciation others may express this week, "It's knowing that we did a good job and we were there when that person needed us," Olinger concluded.

Vidal and Olinger both told 23ABC News that spending time with family and working out are the main tools they use to maintain balance at work. They said talking it out with their work families are also their primary sources of stability.