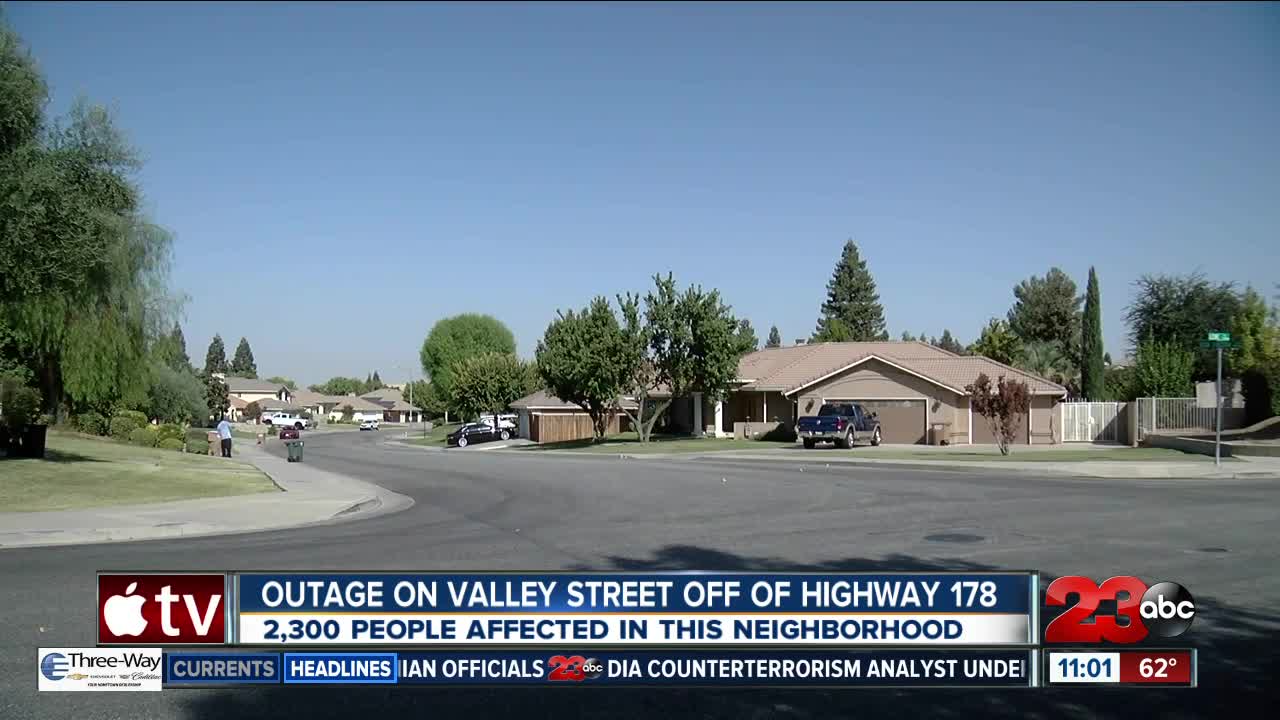 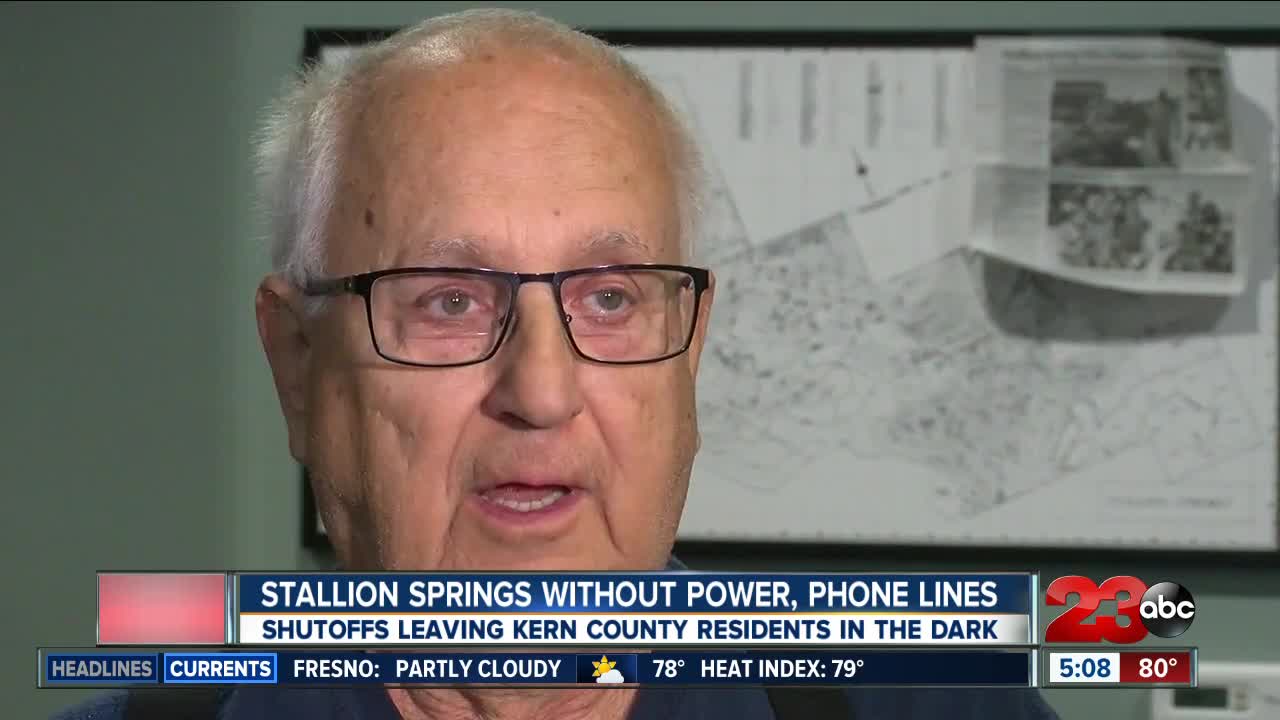 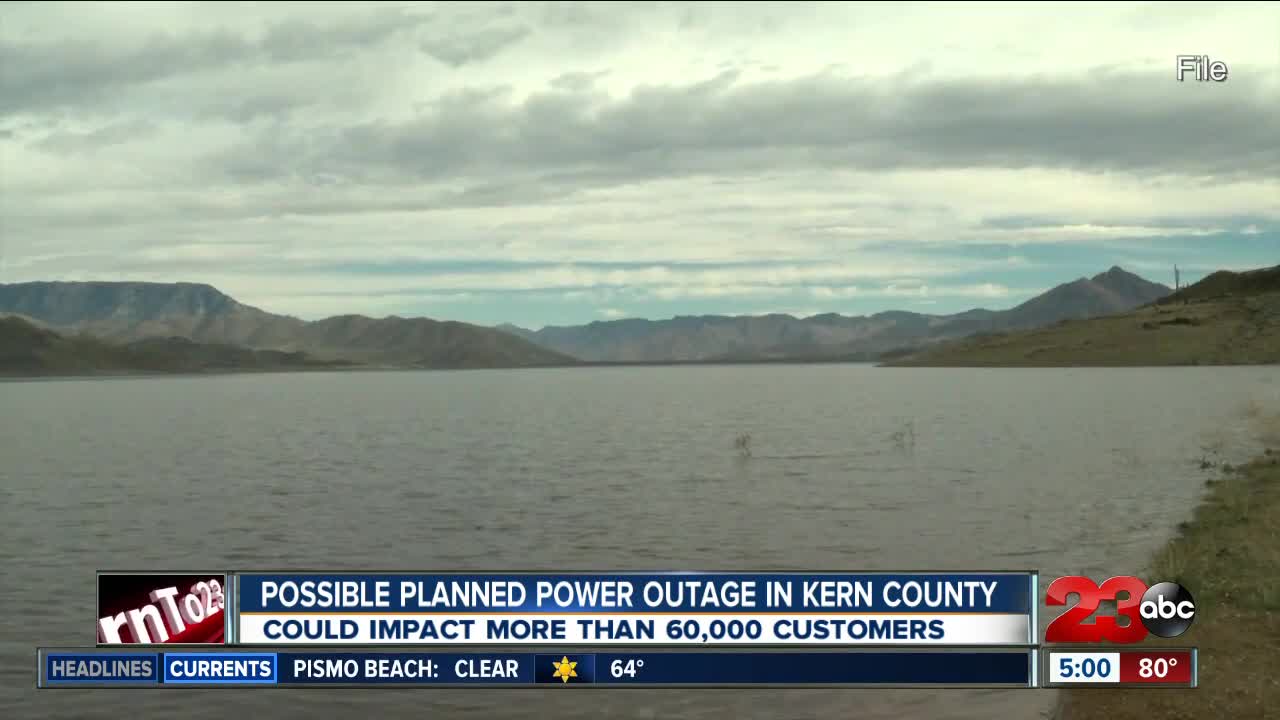 BAKERSFIELD, Calif. — UPDATE (Oct. 11, 1:32 p.m.): According to the Associated Press, Northern California fire official have announced that a "man who relied on oxygen died 12 minutes after losing electricity in planned outage ."

UPDATE (Oct. 11, 12:27 p.m.): PG&E has announced that approximately 543,000 customers have had their power restored, including "full restoration in Humboldt, Siskiyou, Trinity and Yolo counties. Less than 195,000 customers remain without power." In all about 738,000 customers were impacted by the public safety power shutoff.

However, Kern County remains one of those counties still affected by the power outage. Only 2% of PG&E customers in the county have had their power restored.

PG&E said "customers will be restored throughout the day and evening once safety patrols, inspections and necessary repairs are complete."

UPDATE (Oct., 11, 9:17 a.m.): The Kern County Sheriff's Office the public that power and landlines are down in the Stallion Springs and Bear Valley areas.

An important safety message for residents in the Stallion Springs and Bear Valley area. Power and landlines are down in much of the area, and power is not expected back on until at least Saturday. With landlines for many down, it may be difficult to get message to some people impacted. Stallion Springs Police and Bear Valley Police are working to spread the message. If you know someone who may be impacted, please share this message.

You may be aware that Southern California Edison has activated a Public Safety Power Shutoff in the Tehachapi area. The outage does not affect Tehachapi but is fairly widespread in Bear Valley and Stallion Springs. The weather event triggering the PSPS activation is predicted to continue until sometime on Saturday, that is the projected time when Southern California Edison can begin to check the status of their distribution circuits. The power won’t be restored until that process is complete.

For those that require electric power for their critical life medical equipment, community resource centers have been established at:

UPDATE (Oct. 11, 9:04 a.m.): According to a spokesperson from PG&E, the company has over 6,300 personnel and 44 helicopters engaged in supporting inspections as of first light this morning.

UPDATE (12:18 p.m.): According to PG&E, safety inspections have begun as a result of improving weather conditions.

Today (Oct. 10), PG&E reported that improving weather conditions in some parts of the areas affected by the Public Safety Power Shutoff (PSPS) have allowed for safety inspections, repairs and restoration in some areas to begin. Approximately 126,000 customers were restored by 6 a.m. Thursday.

There are still currently approximately 600,000 customers without power as a result of the PSPS event, which began on early Wednesday (Oct. 9).

UPDATE (9:58 a.m.): According to PG&E, power outages have begun in the Kern County area. The shutoffs, which began at approximately 10 a.m. will take 2 hours. It is unknown at this time how long the outage will last, but could be anywhere from 24-48 hours. A Community Resource Center has been established at the Buck Owens Crystal Palace. The resource centers will provide "restrooms, bottled water, electronic-device charging and air-conditioned seating for up to 100."

California Water Service (Cal Water) has been making preparations to help ensure water service to its customers is not impacted if Pacific Gas & Electric (PG&E) shuts down power to prevent the start or spread of wildfires. Cal Water crews are working to minimize any water service interruptions as a result of these Public Safety Power Shutoffs. Cal Water has staged additional, portable backup generators at key facilities to supplement permanent generators installed at critical stations over recent decades. The utility has also mobilized personnel to ensure the systems continue to operate properly if and when electricity has been shut off. Should a power shutoff in Bakersfield be widespread or continue for a long period, Cal Water may reach out to customers and ask them to conserve water through the shutoff.

UPDATE ( 8:32 a.m.): PG&E has provided an update of the areas affected by the power shutoff:

PG&E has announced an alternate website to check if your address could be impacted by potential shutoffs.

#PSPS: PG&E has established an alternate website for customers to check their address for potential impact by a power shutoff. https://t.co/5mn3J5iYn2

UPDATE (10:15 p.m.): PG&E said 4,000 people were alerted about the power shut off Wednesday evening. Officials confirmed power will be turned off for safety about 4 a.m. Thursday ahead of the wind event expected to begin around 6 a.m.

UPDATE (5:54 p.m.): PG&E said they're contacting customers in Kern County to update them on whether are not they will be impacted by the planned power outage. PG& officials said the impact to Kern County customers has went from 42,000 to 4,600 in phase three of its planned safety power outage.

There is a scheduled media briefing planned for 6 p.m. on Wednesday, at that time, they will discuss its plan going forward. You can watch below:

On Wednesday around 12 a.m., PG&E began its statewide phased shutoff of power to prevent wildfires from happening due to the severe winds in its service areas. PG&E warned many of its customers they should expect to be without power early Wednesday morning through Friday morning, as weather models show the winds may be the strongest the area has seen in nearly two years.

Local PG&E officials confirmed around 1 p.m. Wednesday that phase two has been pushed back and they don't have a status on if or when it will begin.

UPDATE (3:19 p.m.): The Stallion Springs Community Services District issued the following statement concerning the potential for a power shutoff in the area:

Both PG&E and Southern California Edison are sending notifications to Kern County residents that there’s a higher potential for power shut-off throughout the entire Kern County area (and much of the State of California) for the next several days. Since this potential public safety power shutoff could effect a large portion of Kern County, we’re asking all residents to be prepared.

Remember – fuel tank at least half full, three days of food and water for each member of your household, know your medication storage requirements, don’t forget to plan for your pets too, check on your neighbors, have a weather radio and batteries, and have a family plan that details what to do in case of emergency.

Do you have a medical device that you depend on and would immediately affect your health if you lost power? Such as a breathing machine or home dialysis equipment? You can contact Aging & Adult Services at 855-264-6565 or Community Action Partnership at 211 for assistance.

The district said it has received word that Stockdale High School and North High School may specifically be impacted Thursday by the power outages. District officials said as a result both schools will be on a 2-hour delayed start on Thursday. Following the delay district officials said parents will be informed by 8:00 a.m. if the power is out and school is canceled for the entire day.

We have attempted to get more specific information from PG&E, but are being told that any of our school sites could be impacted over the next 36 to 48 hours — or may not be impacted at all.

If the District and/or a school site determines it is necessary to release students for the day due to a power outage, the following will occur:

“It’s beyond frustrating that we’re in this situation. Public safety power shutoffs have a role to play when they’re needed to prevent massive wildfires and the huge human and economic costs we’ve seen in recent years. However, many of my constituents are disturbed that the power was shut down before the winds started to pick up in the North Bay.

For years PG&E has done a poor job on maintenance and tree clearing, and they’re still not even close to where they need to be. That fact, along with breakdowns in communication, are unacceptable. Sadly, poor performance by PG&E is par for the course, so it’s not surprising.”

UPDATE (11:52 a.m.): The Arvin Union School District posted to Facebook that the school system is prepared in case of any potential power outages:

UPDATE (11:48 a.m.): The Panama-Buena Vista School District issued the following statement regarding the PG&E Public Safety Power Shutoff and how it may affect the school district:

UPDATE (12:58 P.M.): SCE officials have confirmed with 23ABC that they have set up a community center at the Kern Valley Senior Center at 6405 Lake Isabella Blvd. It will be open until 6 p.m. Wednesday and 8 a.m. to 4 p.m. on Thursday. The center will be open no matter if the power goes out in the area or not.

Southern California Edison said it may need to cut power to roughly 142,000 of its customers because of potential wildfire danger. The potentially affected areas does include Kern County.

However, it is unknown when or if those potential power outages will occur. Click here for more info.

If potential power outages does impact the county, GET officials have released the following service plans:

To prepare for these outages, PG&E said to start charging anything you might need such as phones, laptops, etc.

You also should make sure you have batteries and that your smoke and fire alarms are working. Click here for more safety tips you can use if your power goes out.

County officials also said that utility companies will notify customers directly if they'll be impacted so it is best to make sure your contact information is updated.

On Wednesday morning around 11 a.m. Governor Newsom tweeted a statement regarding the utility power outages. He said his office is actively working to provide support to the communities impacted by the outages.

(2/4) "While the frustration that Californians feel as they deal with the impacts of these power outages is warranted, the purpose of utilities across our state conducting PSPS is to protect communities against the real threat of wildfires due to existing weather conditions."

— Office of the Governor of California (@CAgovernor) October 9, 2019

(3/4) "Our first priority is to protect people and to ensure that communities are safe. My office is working closely with state and local law enforcement and community leaders to keep residents safe and provide support within affected communities."

— Office of the Governor of California (@CAgovernor) October 9, 2019