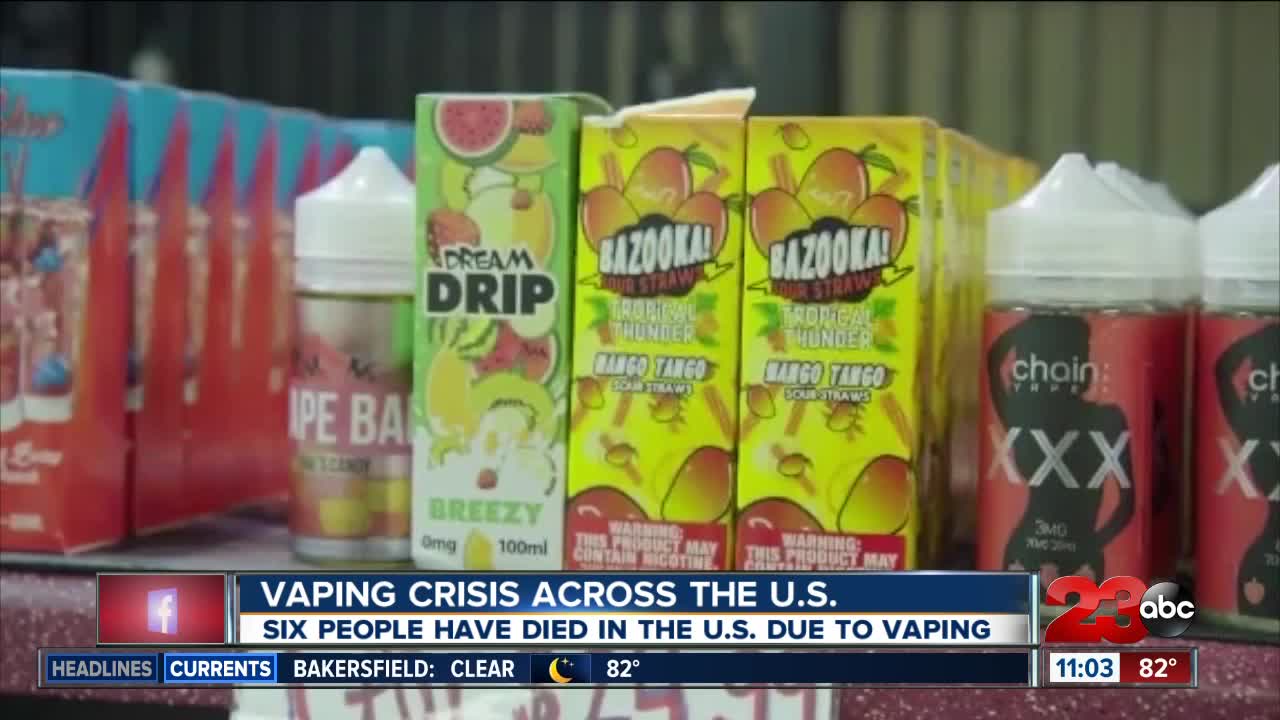 BAKERSFIELD,Calif. — The Center for Disease Control and Prevention announced this week that there is a nationwide outbreak of severe respiratory illnesses connected with the use of e-cigarettes or vaping.

A new report by the CDC has linked e-cigarettes or vaping to lung disease. This week a sixth person has died in the United States due to vaping, which has caused many across the country to take action, especially in our community.

Patsy Romero, legislative ambassador for the American Cancer Society Cancer Action Network, this week went to Capitol Hill to speak with Congress on passing a law to ban vaping or e-cigarettes.

"It's about saving lives and tobacco causes deaths and one-third of cancer deaths are related to tobacco," Romero said. "Here in Kern County, the number leading cause of cancer death is lung cancer."

The Trump administration announced they, too, are taking action to fight what many federal and local officials are calling an epidemic.

"We can’t allow people to get sick and we can’t have our youth be so affected," said President Trump.

A statement released by the U.S Department of Health and Human Services announced that the Trump administration in the upcoming weeks will clear the shelves of e-flavored cigarettes other than non-tobacco-flavored e-cigarette products.

"He has to ban everything not just flavors it has to be e-cigarettes vaping, menthol, all of them," Romero said. "We can not allow any loopholes that any tobacco company can find."

The CDC along with other federal and local agencies announced that they are investigating a multistate outbreak of lung disease associated with e-cigarette products.

The CDC states there are close to 400 cases of lung illness reported from 36 states. Six deaths have been reported from six states.

"There is a notion that e-cigarettes are safer but the danger that comes with it is an addiction," said Jasmine Ochoa, from the Kern County Public Health Services Department. "You have never used nicotine before, you never used vaping or a cigarette before and you are using a device that doesn’t tell you how much nicotine you are putting your body."

According to public health officials, the JULL pods themselves are equivalent to a pack of cigarettes and some kids are going through two a week or two a day.

"If you can not stop using an e-cigarettes a couple hours or up to a day, you have become addicted," Ochoa said.

The Department of Health says they don’t recommend individuals who ave been using e-cigarettes in efforts to quit cigarette smoking, to return to smoking cigarettes.

The Kern County Public Health Department says that they have not received any reports of anyone having any related respiratory symptoms caused by vaping. Also, they are recommending anyone with symptoms to be checked out by a doctor immediately.