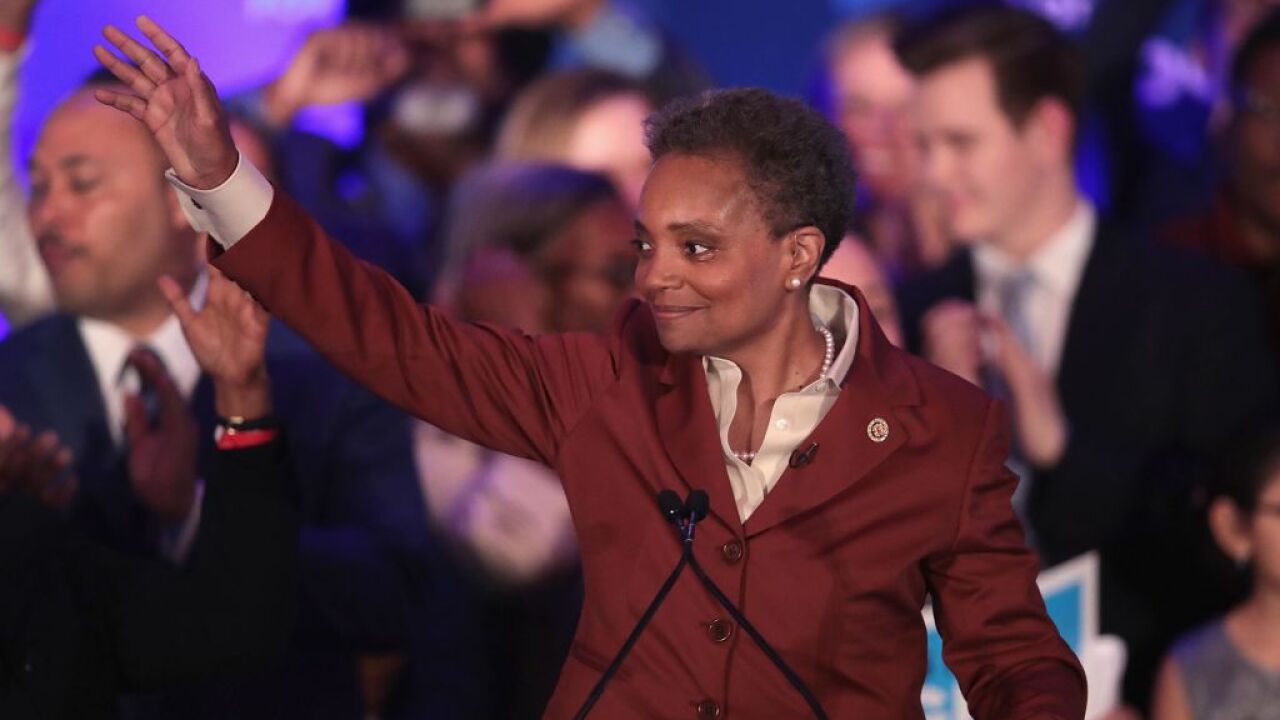 While celebrating her victory in becoming the first African-American woman picked to lead Chicago, Lori Lightfoot thanked the city and those who blazed the trail for her victory.

"We may be strangers but in this room, in this city we are all neighbors," she told a cheering crowd following her win.

Lightfoot faced a historic runoff Tuesday against Toni Preckwinkle, who is also an African-American woman.

"Now that it's over I know that we will work together for the city that we both love," Lightfoot said at her campaign celebration. "Today you did more than make history, you created a movement for change."

She told her followers they were going to remake Chicago, home to 2.7 million people.

Her competitor vowed to keep working on issues important to her.

"This may not be the outcome we wanted but while I may be disappointed, I'm not disheartened," Preckwinkle told supporters after she called Lightfoot to congratulate her.

Mayor Rahm Emanuel was not in the race, as he was not seeking a third term.

Lightfoot, 56, a former assistant US attorney, describes herself as "an out and proud black lesbian." When she is sworn in, she will be the first mayor in the Windy City who identifies as a lesbian.

"Out there tonight a lot of little girls and boys are watching. They're watching us. And they're seeing the beginning of something, well, a little bit different," Lightfoot told the crowd on Tuesday with a wry smile.

In the wake of the Laquan McDonald scandal -- in which a white police officer, Jason Van Dyke, shot the black teenager 16 times as he walked away from police -- Lightfoot was appointed by Emanuel to head the newly created police accountability task force.

A Chicago Tribune report in January claimed that Preckwinkle hired the son of a powerful old-school alderman, Ed Burke, to a $100,000 a year job with the county. Burke was recently charged with attempted extortion after the FBI raided his offices in January.

In February's general election which had 14 candidates, Lightfoot and Preckwinkle were the top two vote-getters, which led to Tuesday's runoff.

The next mayor will face issues like crime and police-community relations.

"A new mayor with a plan for police reform and better police-community relations will enhance the quality of life in the city and encourage people -- especially young people who wish to start a family -- to move to the city," said Arthur Lurigio, a professor of psychology and criminal justice at Loyola University Chicago . "The perceptions that a new mayor creates about safety and policing could make the city a more attractive place to live and stop the outflow of residents."

Violent crime totals in Chicago have made headlines in recent years. In 2016, the city reported its highest number of homicides in two decades: 762.

Police have credited the drop in violence partly to hiring more police officers, and stronger community policing. The department added 1,161 officers in two years, exceeding a 2016 pledge made by Emanuel and police Superintendent Eddie Johnson to add 970.