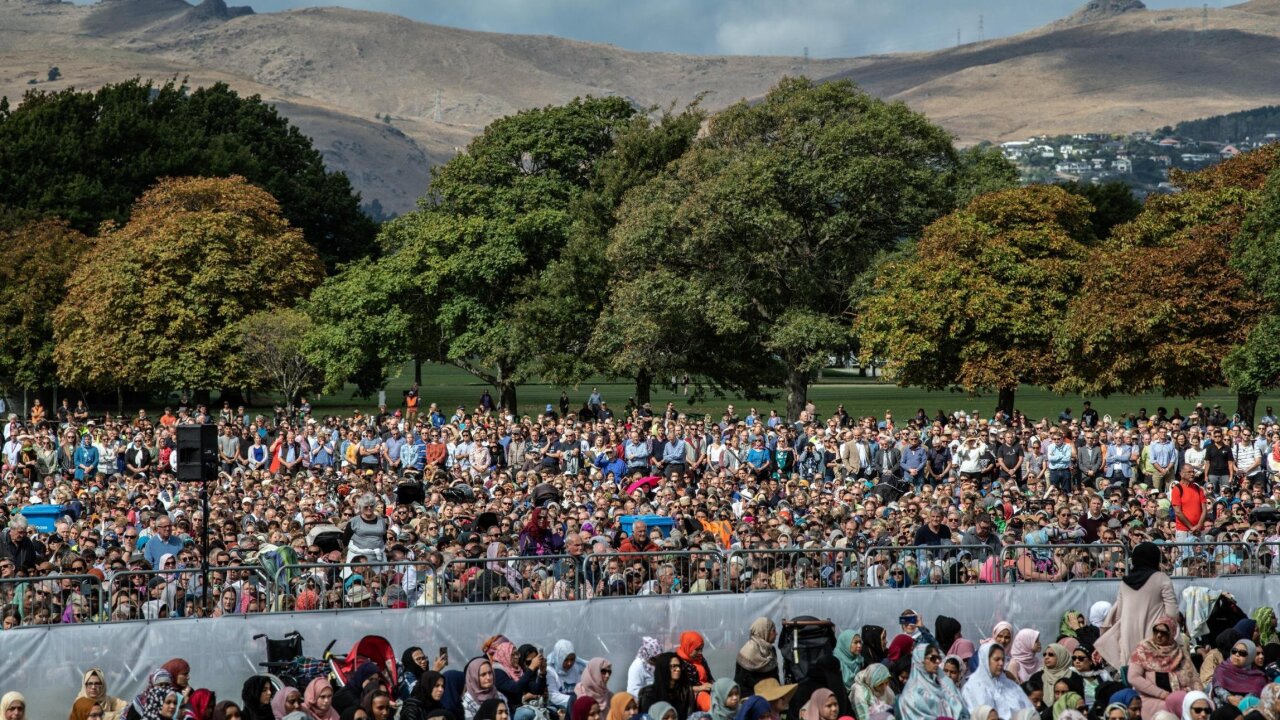 New Zealand came together in a national day of reflection Friday to mark a week since the mass shootings at two Christchurch mosques that killed 50 people.

The Muslim Call to Prayer was broadcast on national television at 1:30 p.m. local time, followed by two minutes of silence to remember those who lost their lives in the terrorist attack.

At almost the same time as when the attack was first reported to police, Christchurch ground to a halt for two minutes. Hundreds stood, their heads bowed at the memorial wall at the Botanic Gardens where flowers have been laid all week.

In Hagley Park, a short walk from the Al Noor mosque where most people were killed in the first attack, thousands of people attended a memorial service before Friday prayers.

Quoting the Prophet Muhammad, she said: "The believers in their mutual kindness, compassion, and sympathy are just like one body. When any part of the body suffers, the whole body feels pain."

"New Zealand mourns with you; we are one," she said.

As the Muslim community gathered to pray and mourn, hundreds of non-Muslims stood around the perimeter of the site in solidarity. The area was treated with the reverence of a mosque, with many women -- including the prime minister -- wearing headscarves as a mark of respect.

Following the moment of silence, the Imam of Al Noor Mosque, Gamal Fouda, delivered a sermon at the Christchurch memorial, saying that he "saw hatred and rage in the eyes of the terrorist who killed and martyred fifty innocent people, wounded 42, and broke the hearts of millions around the world."

Addressing the attacks directly, Fouda said that the "evil ideology of white supremacy did not strike us first yet. It struck us hardest. The number of people killed is not ordinary, but the solidarity in New Zealand is extraordinary to the families of the victims, your loved ones did not die in vain."

Fouda was delivering his Friday sermon at the Al Noor Mosque last Friday when the gunman began his attack.

"This terrorist sought to divide our nation apart with an evil ideology, that has torn the world apart, but instead we have shown that New Zealand is unbreakable, and that the world can see in us an example of love and unity. We are brokenhearted, but we are not broken. We are alive. We are together. We are determined to not let anyone divide us."

Across town, 26 victims of the mosque attacks with be buried at Memorial Park Cemetery on Friday, according to a statement released by Christchurch City Council.

The council will release their names after the burials.

New Zealand Police announced on Thursday that all 50 bodies from the shootings had been identified. "This means that all victims are now able to be released to their families," Police Commissioner Mike Bush said in a statement.

Police said on Thursday that the two mosques targeted in last Friday's attack will be handed back to the community on Saturday.

"The Linwood Avenue and Deans Avenue Mosques have been restored and will be handed over to the community on Saturday. The community will make an announcement when prayers will commence," The New Zealand Police quoted a statement from the Canterbury Police late on Thursday.