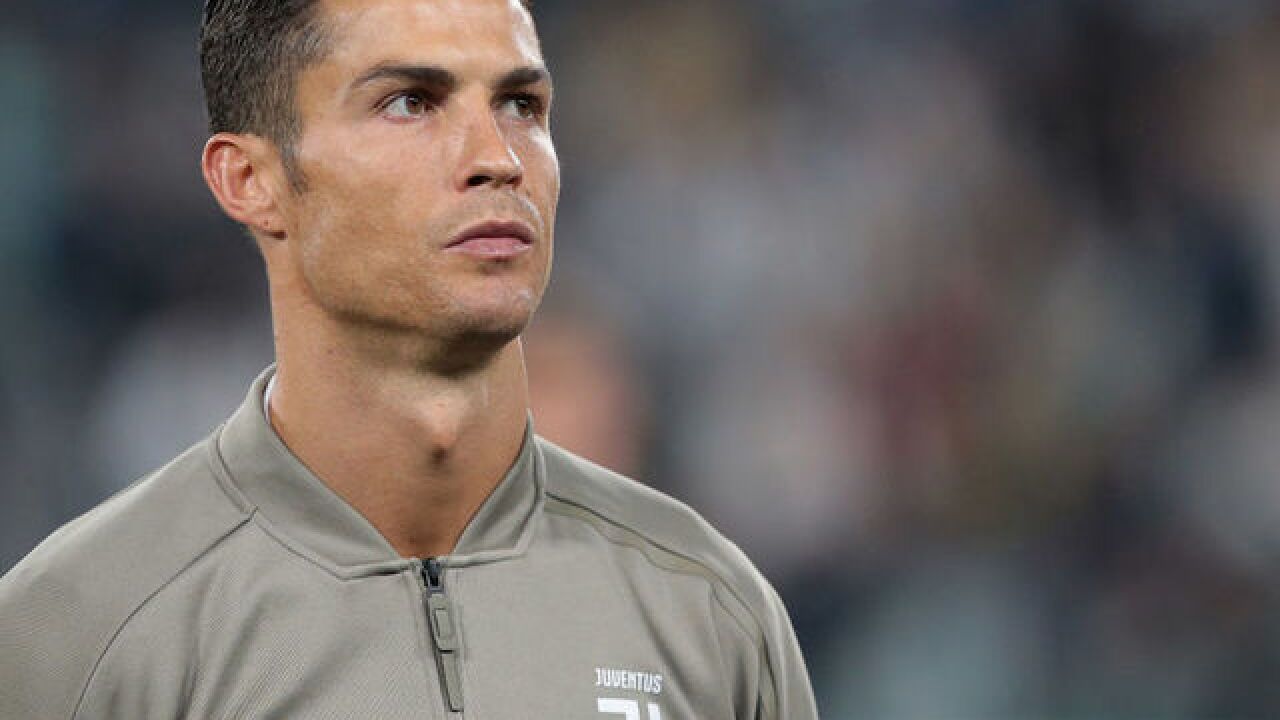 Image copyright 2018 Getty Images. All rights reserved. This material may not be published, broadcast, rewritten, or redistributed.
Emilio Andreoli
<p>Cristiano Ronaldo of Juventus FC looks on prior to the Serie A match between Juventus and Bologna FC at Allianz Stadium on September 26, 2018 in Turin, Italy.</p>

A lawyer representing the woman claiming Cristiano Ronaldo, one of the world's biggest soccer stars, raped her in a Las Vegas hotel room in 2009 has said the accusation is not "fake news."

Kathryn Mayorga says the Portuguese footballer, who now plays for Italian club Juventus, raped her while she repeatedly screamed no, according to a lawsuit filed Friday in Clark County, Nevada.

After the attack, according to the lawsuit, Ronaldo apologized, "stating he was sorry, he was usually a gentleman."

The lawsuit alleges that Ronaldo told his representatives that "she said 'no' and 'stop' several times."

Mayorga's lawsuit accuses Ronaldo, 33, and his team of taking advantage of her fragile emotional state to coerce her into signing a settlement and nondisclosure agreement in 2009.

She claims she received $375,000 in exchange for her silence. Her lawsuit seeks to void the settlement and agreement.

Leslie Stovall, Mayorga's co-counsel, said her complaint and her "psychological" injuries, as well as the physical evidence, the settlement and Ronaldo's alleged answers to questions about the assault, are not fake news.

In a statement, Stovall said her client wanted to hold the soccer star accountable and protect other women and also wanted to show how "fixers" like the ones who allegedly assisted Ronaldo enable sexual assault, Stovall said.

Mayorga hoped, said Stovall, to convince victims to pursue charges against alleged perpetrators, "no matter how wealthy, famous or powerful they may appear to be."

Ronaldo's representatives denied the rape allegations when German publication Der Spiegel first reported them in 2017. After the outlet broke news of the lawsuit Friday in an interview with Mayorga, Ronaldo's lawyer called the reporting "blatantly illegal."

"It violates the personal rights of our client Cristiano Ronaldo in an exceptionally serious way. This is an inadmissible reporting of suspicions in the area of privacy," lawyer Christian Schertz said in a statement.

Ronaldo appeared to dispute the claims in an Instagram live post on Friday: "What they said today, fake -- fake news. They want to promote by my name. It's normal. They want to be famous -- to say my name. Yeah but it's part of the job. I'm (a) happy man and all, all good."

Der Spiegel told CNN Sport Tuesday that it had not received any notification of legal action from Ronaldo's representatives.

Las Vegas police announced the case was re-opened on Monday.

The Portugal captain, who joined Juventus from Real Madrid for a reported $117 million in the summer, played for the Italian club in its 3-1 win over Napoli Sunday, playing a part in all three goals.

But he will not feature in Tuesday's Champions League tie against Young Boys as he is suspended following his sending off during Juve's 2-0 win over Valencia on September 19.

Shares in Juventus, Italy's most successful club, have more than doubled since Ronaldo signed in July and have not significantly been affected in recent days, with share prices dipping a few percentage points.

The 33-year-old was bought by the Italian champions for his global appeal off the pitch as much as his skill on the pitch, with the club executives describing the financial opportunity presented to them by signing the five-time Ballon d'Or winner as "the Ronaldo effect."

Juventus did not immediately respond to CNN Sport's request for comment on Mayorga's lawsuit.

Mayorga met Ronaldo at the now-closed Rain nightclub, inside the Palms Hotel and Casino on June 13, 2009, the complaint says. Ronaldo invited her, her friend and others to his penthouse suite. According to Mayorga's lawsuit, Ronaldo asked her to join the group in a jacuzzi and gave her shorts and a T-shirt to wear.

As Mayorga changed in a bathroom, she said Ronaldo approached her, exposed himself and asked her for oral sex. Mayorga said she refused, but that Ronaldo pulled her into a bedroom and raped her as she screamed, "No, no, no."

The same day, she reported the incident to police and went to the hospital for a sexual assault examination, the lawsuit says.

Initially, she refused to identify Ronaldo to police, fearing public humiliation, her complaint says. Weeks later, when she named him in a police interview, a detective told her that she would face retaliation and her actions would be portrayed as extortion attempts, according to the lawsuit. A nurse who examined her shared the same sentiment, Mayorga said in the lawsuit.

"The psychological trauma of the sexual assault, the fear of public humiliation and retaliation and the reiteration of those fears by law enforcement and medical providers left plaintiff terrified and unable to act or advocate for herself," the lawsuit claims.

Meanwhile, Ronaldo had retained a team of "fixers" that the lawsuit calls "personal reputation protection specialists" and are unnamed defendants.

The lawsuit alleges they monitored Mayorga, her friends and family, and law enforcement to "develop and implement a strategy" to prevent or delay public disclosure of the allegations and criminal prosecution of Ronaldo.

The Las Vegas Police Department confirmed that Mayorga did not provide an assailant's name or location of the alleged assault in her 2009 complaint. She only wanted to report a sexual assault and submit to a medical exam, police spokesman Aden Ocampo-Gomez said.

The lawsuit accuses Ronaldo of battery for sodomizing her. Additional claims against him and his representatives include intentional infliction of emotional distress, coercion and fraud, and abuse of a vulnerable person.

In mediation discussions, Ronaldo's representatives led her to believe they were attempting to compensate her for her injuries, and that agreeing to the settlement precluded her from cooperating with police.

In reality, the lawsuit claims, his team was attempting to obstruct a criminal investigation and erode Mayorga's credibility, thus diminishing her chances of pursuing a claim for civil damages.

The allegations form the basis of Mayorga's claims of coercion and fraud, racketeering and civil conspiracy, and abuse of process.

Her family, who lives in Las Vegas, attended mediation to provide her with emotional support and advice. But they were excluded from discussions by Ronaldo's team and the mediator, according to the lawsuit.

Aware of her "vulnerable" state, his team reinforced the threat of public humiliation if she or anyone else publicly disclosed her allegations or cooperated with law enforcement, her complaint says.

They threatened to portray her as having consented to sex and then making a false claim so she could extort the man considered one of the world's best -- if not the best -- player for the past decade.

Mayorga described mediation "as re-experiencing the sexual assault," an ordeal marked by "extreme fearfulness, complete helplessness and eventually a sense of passivity where she would do anything just to be able to leave/escape/avoid revisiting the sexual assault by continuing the mediation," the lawsuit says.

Over the years that Mayorga maintained her silence, her emotional health suffered under the weight of post-traumatic stress disorder, according to the lawsuit. She says she struggled to maintain relationships or hold down a job.

Meanwhile, Ronaldo's star grew. Now a father of four, he won 2017's Ballon d'Or, given to the best male player in the world. It marked his fifth time hoisting the trophy, a feat matched only by Argentina/Barcelona star Lionel Messi.

Ronaldo counts a lifetime Nike deal among his many endorsements and is well-known for his philanthropy, especially when it comes to children's causes.

Then, a sports website leaked copies of documents and communications between Ronaldo and his team relevant to the mediation to Der Spiegel, which published a detailed account of the allegations in April 2017.

Mayorga retained legal counsel, fearful that she might somehow be linked to the article and run afoul of the settlement, one of her lawyers, Larissa Drohobyczer, told CNN. Motivated by the collective voices of #MeToo, she decided to come out publicly and move forward with the lawsuit after her team obtained corroboration of her account, Drohobyczer said.

Mayorga's lawsuit claims that she obtained the documents from Ronaldo's team and handed them over to Las Vegas police in August.

One of the purported documents, quoted in the lawsuit, calls the settlement "incredibly favorable" given the nature of Mayorga's claims and the potential impact they could have on his personal and professional reputation, including endorsement opportunities.

And, the document says, it avoided the potentially "catastrophic effect" of not letting him travel in the US.

They called the account a "journalistic fiction" that contained "unattributable and unsubstantiated allegations" that were "untruthful and false," according to the lawsuit. Their denials form the defamation claims in Mayorga's lawsuit.

Mayorga did not participate in the article and was not named in it. In a later interview published by Der Spiegel on Saturday, in which she was identified for the first time, she said that she had followed the online reaction to the original story closely.

She had taken notice of comments about the athlete's desirability, she told the magazine, including statements to the effect of, "As if Ronaldo even needs to rape a woman."

Those statements mirrored thoughts she once had about Ronaldo, she told the magazine. But she wasn't going to be silent any more.