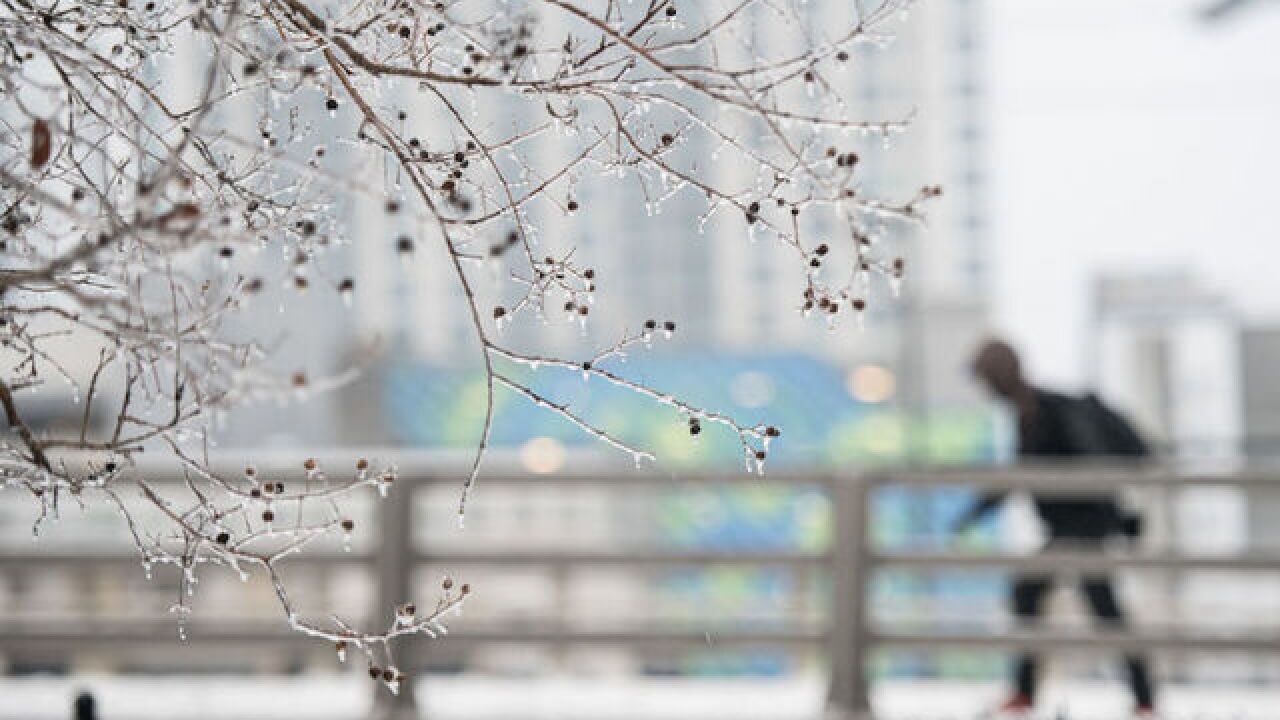 Image copyright 2018 Getty Images. All rights reserved. This material may not be published, broadcast, rewritten, or redistributed.
Sean Rayford
<p>A man walks across a bridge as ice collects on a tree branch on December 9, 2018 in Charlotte, North Carolina. </p>

The Southeast's first winter storm of the season has faded, with clear conditions expected Tuesday, but tens of thousands of people remain without power after the weekend's record-setting snow.

The storm killed three people in North Carolina and grounded thousands of flights in the region, including more than 500 flights on Monday.

Early Tuesday, more than 44,500 customers in North Carolina, 20,000 in South Carolina and 15,600 in Virginia were without power, according to Poweroutage.US.

CNN meteorologist Michael Guy said temperatures Tuesday would be cold, but above freezing. "At night there will still be possibilities of refreezing over bridges and overpasses on the roads," he warned.

The Virginia Department of Transportation advised drivers to allow extra braking distance and to take it slow.

"If you plan to travel overnight, watch for slick roads & use extra caution. Dropping temps could cause any moisture on the roadways to refreeze," the transportation department said on Twitter.

'A year's worth of snowfall'

Up to 24 inches of snow covered parts of the Appalachian Mountains region over the weekend, CNN meteorologist Pedram Javaheri said.

North Carolina Gov. Roy Cooper on Monday asked residents to check on vulnerable loved ones and the elderly, if possible. He said 15 emergency shelters had opened across the state.

"This storm dropped staggering amounts of snow, ice and rain across our state," Cooper said. "A year's worth of snowfall or more fell on some places in a little more than a day."

A spokesman for North Carolina's Department of Public Safety said Monday that a truck driver whose truck got stuck on Interstate 77 in Yadkin County was the third storm-related death in the state.

"He was working outside to free his truck when he suffered some kind of medical condition. He was taken to the hospital and he died in the hospital," spokesman Keith Acree told CNN.

The medical condition was unknown, Acree said, but the state's medical examiner's staff determined that the death was related to the storm.

A terminally ill woman on hospice care also died when the oxygen concentrator in her Haywood County home stopped working after a power outage, the governor's office said.

In the Charlotte suburb of Matthews, a tree fell on a vehicle, causing the car to careen and crash into a church, police said. The driver died, and the passenger was taken to a hospital with minor injuries.