Thousands in California may owe state taxes because of technical glitch 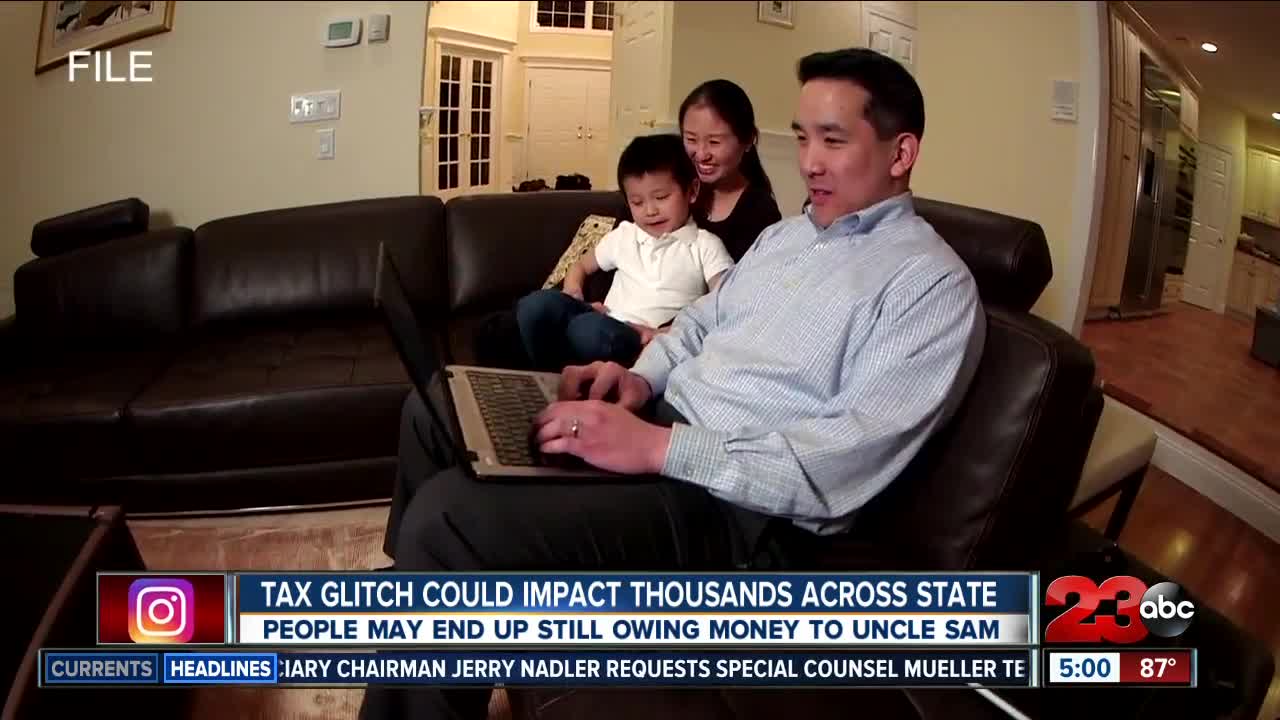 As the FTB worked to review those more than 23,000 returns some local tax preparers said they had no idea about this error.

Money wise Financial Advisor Justin Leland along with many other certified public accountants were notified by the franchise tax board on Tuesday that the board discovered 23,500 California taxpayers may have received tax refunds that weren't enough or were too much, "For tax filers that had filed their taxes from March 8 to the March 11 time frame that glitch basically was that the state of California wasn't able to verify income and withholdings."

The FTB told 23ABC News that California expects to process about 18 million tax returns this year.
Since Tuesday it has processed nearly 14 million state income tax returns and issued more than 10 million refunds. However, many different types of workers in the community may be impacted, "W-2 employee, self employed, anybody that filed their taxes during those time frames if there is any kind of issue they are going to be getting a notification from the state of California whether they over-withheld and they are going to get a little bit of an extra check coming back their way or if they under-withheld and they actually have to owe the state of California some back taxes,"Leland said.

According to Leland if you misstated your income or your withholding on your state filing forms your wallet may see an increase or decrease on the refund you received.. or on the one you are still waiting on,"We're only talking about 23,000 or so filing and of those only the ones that had strange number in there would have any kind of an issue."

If you haven't already cashed your refund check experts say it's best to reach out to the FTB directly and or wait to see if you get a surprise in the mail this April, "Starting on April 22 they are going to start actually notifying people that might potentially have an issue with this filing, and so people who have already deposited those checks may have some taxes that they are going to owe and they are going to have to pay that back to the state of California,"Leland said.

The FTB also said if you did not receive a refund at all, either an accurate bill will be mailed to you or you will receive the correct refund that is due. However, since most Californian's already submitted their taxes Leland said you won't know for sure unless they contact you because of the way the glitch took place, "Once you've hit submit on Turbo Tax is submits it to the state but then it has to be approved by the state. This is where the glitch actually happened is that the state basically approved without verifying the income and withholding requirements."

Again if you filed between March 8 and March 11 you may be a taxpayer that is effected. If you are concerned that you may be one of the roughly 23,000 people impacted reach out to the FTB directly and or your accountant.

See below for the entire statement from the FTB Tuesday:

During the period from March 8, 2019 to March 11, 2019, a system error caused us to issue refunds to approximately 23,500 taxpayers without first verifying the claimed wage withholding. This may have led to the taxpayer's withholding being increased or decreased incorrectly. Additionally, the taxpayer may have received a Notice of Tax Return Change with an incorrect explanation of the adjustment.

In order to correct this error, in the coming weeks we are going to review each potentially impacted account and ensure that the proper amount of withholding is applied. This may result in a change to the refund that the taxpayer received. If they did not receive a refund, either an accurate bill will be mailed to them, or they will receive the refund that they are due.

We will be contacting affected taxpayers directly beginning the week of April 22nd. At that time, we will request additional information, if needed. Please accept our apology for any inconvenience this may have caused you or your clients.