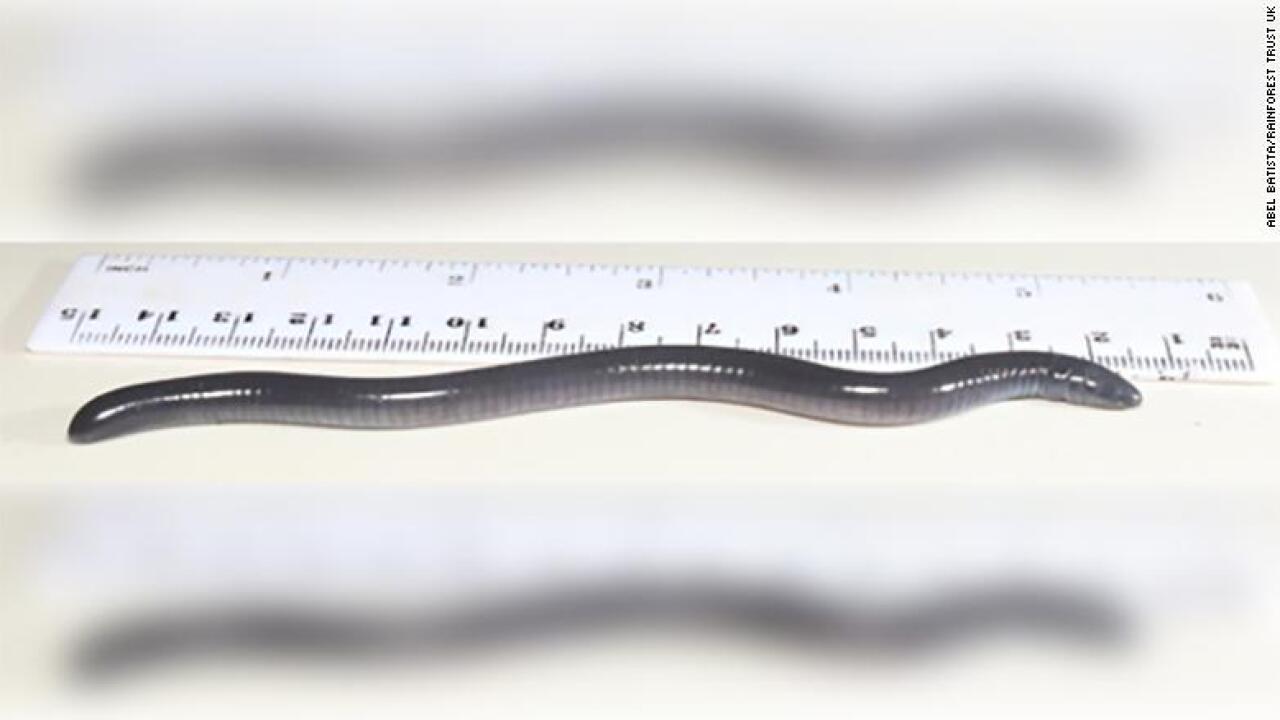 CNN — After winning an auction to name a newly discovered blind amphibian, a British company chose Donald Trump as the creature's namesake, likening its behavior to the US President's stance on climate change.

Dermophis donaldtrumpi was discovered in Panama and has a propensity for burrowing its head in the ground, said Aidan Bell, co-founder of sustainable building materials company EnviroBuild.

"Realizing the similarities between the amazing but previously unknown creature and the leader of the free world we couldn't resist buying the rights," Bell told CNN via email.

The animal is a caecilian -- a limbless, burrowing amphibian -- that spends most of its time underground, according to a statement from EnviroBuild. It lost its limbs around 60 million years ago but does have tentacles that it uses to find prey.

"As demorphis donaldtrumpi is an amphibian, it is particularly susceptible to the impacts of climate change and is therefore in danger of becoming extinct as a direct result of its namesake's climate policies," said Bell in a statement.

Trump has long been known as a climate-change skeptic.

"Global warming is a total, and very expensive, hoax," he tweeted in 2013, and his stance does not appear to have changed much since he became President.

In late November, Trump dismissed the Fourth National Climate Assessment, a US government research report on climate science, because he didn't agree with its findings.

"I don't believe it," Trump told reporters, adding that he had read "some" of the report.

However, it makes for worrying reading.

"Climate change creates new risks and exacerbates existing vulnerabilities in communities across the United States, presenting growing challenges to human health and safety, quality of life, and the rate of economic growth," says the report.

Bell told CNN that his company had grown frustrated by the lack of progress at the COP24 climate talks in Katowice, Poland at the beginning of December.

"We're not a political company, but climate change shouldn't be political either," he said.

EnviroBuild paid $25,000 for the right to name the animal, which will soon be added to the vulnerable species list, at a December 8 auction to raise money for the Rainforest Trust.

"Protecting the world's remaining rainforests is now acknowledged as one of the most effective ways to mitigate climate change, yet every day nearly 70,000 acres of rainforest are destroyed forever," said Chris Redston of Rainforest Trust UK in a statement.

"This is not only one of the main causes of climate change, but it is also having a devastating impact on endangered wildlife, indigenous communities and the planet's weather patterns."