Trump planning to pull 7,000 troops from Afghanistan, reducing force by half

The Trump administration is planning to reduce the number of U.S. troops in Afghanistan, with the possibility that some troops begin withdrawing in the coming weeks, according to a U.S. official. The current force of 14,000 is expected to be cut in half, with those troops arriving home by the end of the spring, a second U.S. official said.

A third official told ABC News that discussions have been underway for several weeks about how to withdraw some U.S. troops from Afghanistan.

(MORE: What you need to know about US military involvement in Syria as Trump orders withdrawal)

The president discussed the plan on Wednesday with Defense Secretary James Mattis, Secretary of State Mike Pompeo and national security adviser John Bolton, who all cautioned against the move, according to a fourth U.S. official and another source with knowledge of the meeting. Trump believes withdrawing troops from Afghanistan would appeal to his base and fulfill a campaign promise.

The consideration comes just one day after Trump announced he was pulling 2,000 U.S. troops out of Syria within 30 days.

Asked by a reporter over Thanksgiving if he would withdraw troops from Afghanistan, Trump replied, "We're always looking to do the right thing. We'll be seeing over a period of time, but we're looking."

Late on Thursday, Mattis announced he would leave the office of Defense Secretary on Feb. 28, 2019, writing in a resignation letter about the importance of U.S. alliances and partnerships, issues that Mattis and Trump have clashed over in the past -- including Afghanistan. 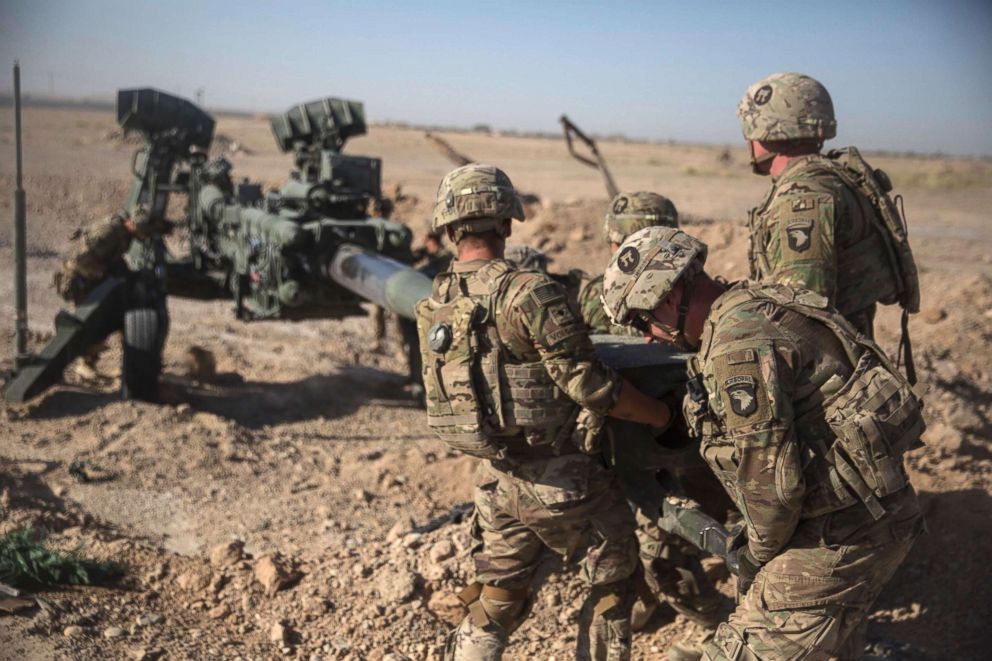 (MORE: Trump announces Secretary of Defense James Mattis will retire at the end of February)

“Because you have the right to have a Secretary of Defense whose views are better aligned with yours on these and other subjects,” Mattis wrote. “I believe it is right for me to step down from my position."

Asked whether the president had given any indication he intends to pull troops out of Afghanistan, Sen. Lindsey Graham, R-South Carolina, said on Thursday to ABC News, "I'm concerned about that, but after having been to Afghanistan, it will pave the way for another 9/11.

"It will be the most disastrous decision any president could make as to withdraw our forces from Afghanistan without conditions changing."

There are currently about 14,000 U.S. troops serving in a counterterrorism mission against the Taliban and ISIS and as part of a train, advise, and assist mission for Afghan security forces.

Shortly after entering office, Trump decided to add 3,000 U.S. troops to the mission as part of his South Asia Strategy for the region.

"America will work with the Afghan government as long as we see determination and progress. However, our commitment is not unlimited, and our support is not a blank check," Trump said when announcing the new strategy in August of 2017. "The government of Afghanistan must carry their share of the military, political, and economic burden. The American people expect to see real reforms, real progress, and real results. Our patience is not unlimited. We will keep our eyes wide open."