Marine Private First Class Joseph Robert Livermore was killed 76 years ago in the battle for Tarawa during World War II, and he remained there, on that sandy Atoll until earlier this year when his remains were discovered by the group 'History Flight'. 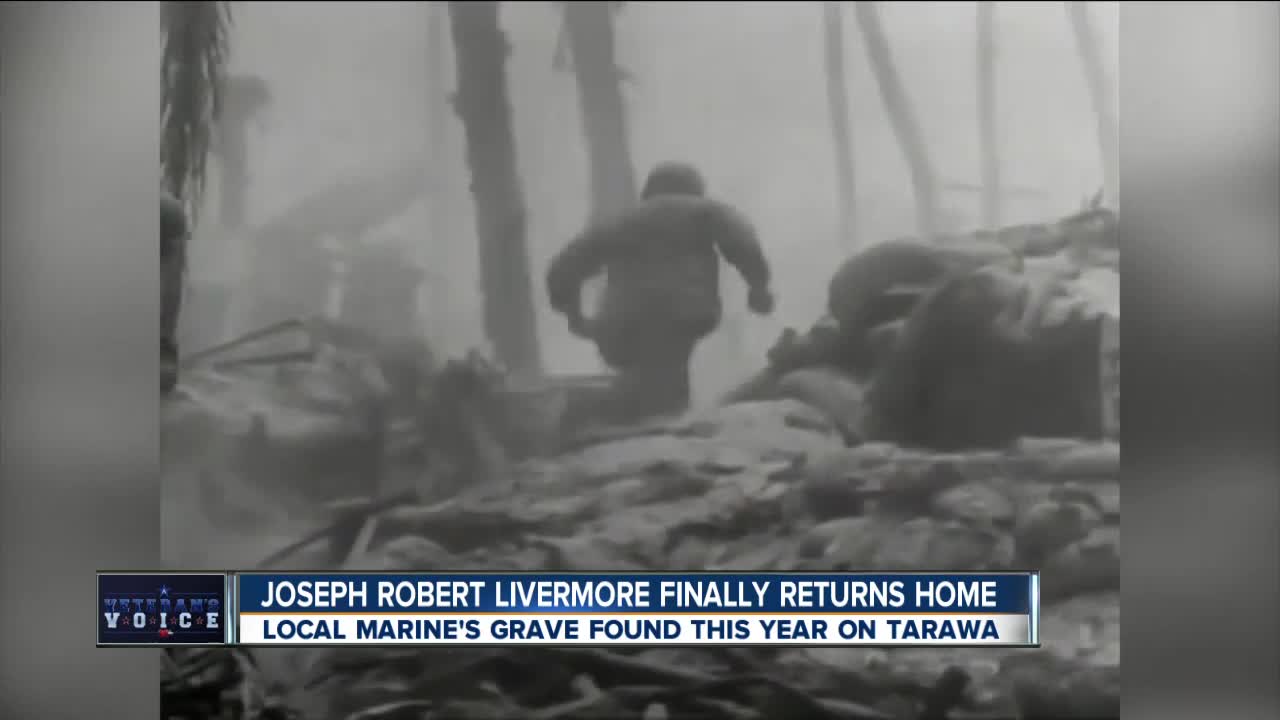 PFC Joseph Robert Livermore is laid to rest 76 years after he was KIA in the Battle for Tarawa in World War II. His remains were discovered along with 32 other Marines earlier this year on the tiny South Pacific island.

BAKERSFIELD, Calif. — Private First Class Joseph Robert Livermore returned to Kern County on November 14, 2019, almost exactly 76 years after he was killed in action on the island of Tarawa during World War II. The local Marine celebrated by crowds lining streets all throughout Bakersfield.

He left town in the days following the attack on Pearl Harbor. It was the last time his family would see him, but his hometown was never really that far away. Following boot camp in San Diego, he finally deployed in the fall of 1943, traveling to Tarawa, a small atoll in the South Pacific. During the trip, he reunited with a family friend from Bakersfield. Capt. Joe Clerou, whose mother was friends with Robert's mom, found his name on the manifest and located Livermore among the thousands of Marines headed into battle.

"My dad was already a combat veteran, having fought at Guadalcanal," said George Clerou, "he gave Robert a pep talk telling him not to worry, the Navy would shell the island continuously, and there probably won't be anyone left."

But there were plenty of Japanese soldiers waiting for the Marines, estimated at more than 4,000. The battle lasted three days, a total of 76 hours. The Marines having to traverse shallow reefs just to reach the shoreline. A fierce battle ensued with the enemy fighting until literally the last man. Livermore and the 1st Battalion, 6th Marines landed just off Green Beach on the west side of the island. Robert was killed during an early morning banzai charge on the last day of fighting.

"It was hand-to-hand fighting, the Marines dug in and held their position," said Dick Taylor, "46 members of the 6th Marines died in that attack with Livermore being fatally wounded in his throat."

But their sacrifice paved the way to victory in the Pacific. Taylor's father, a B-25 pilot, flew missions off an airstrip constructed on Tarawa in the days after the battle ended. Robert was buried on the atoll with a thousand other Marines. In the years that followed, the markers were moved or misplaced, and the graves of hundreds of Marines were thought to be lost. The group 'History Flight' has been actively working to find and recover the remains on Tarawa for the past 15 years.

Earlier this year, Livermore was one of 33 remains located on the remote island. The Marines were picked up and returned home with full military honors. "It's amazing how they were able to preserve him," said Darrell Feliz, Livermore's Nephew. "My Great Uncle has been missing for decades and now he comes home and people are cheering and waving flags, it was really emotional," said Nikki Linenberger.

His burial at the historic Union Cemetery marking the end of a long journey home, lying beside his mother and thousands of other local service members from Kern County.