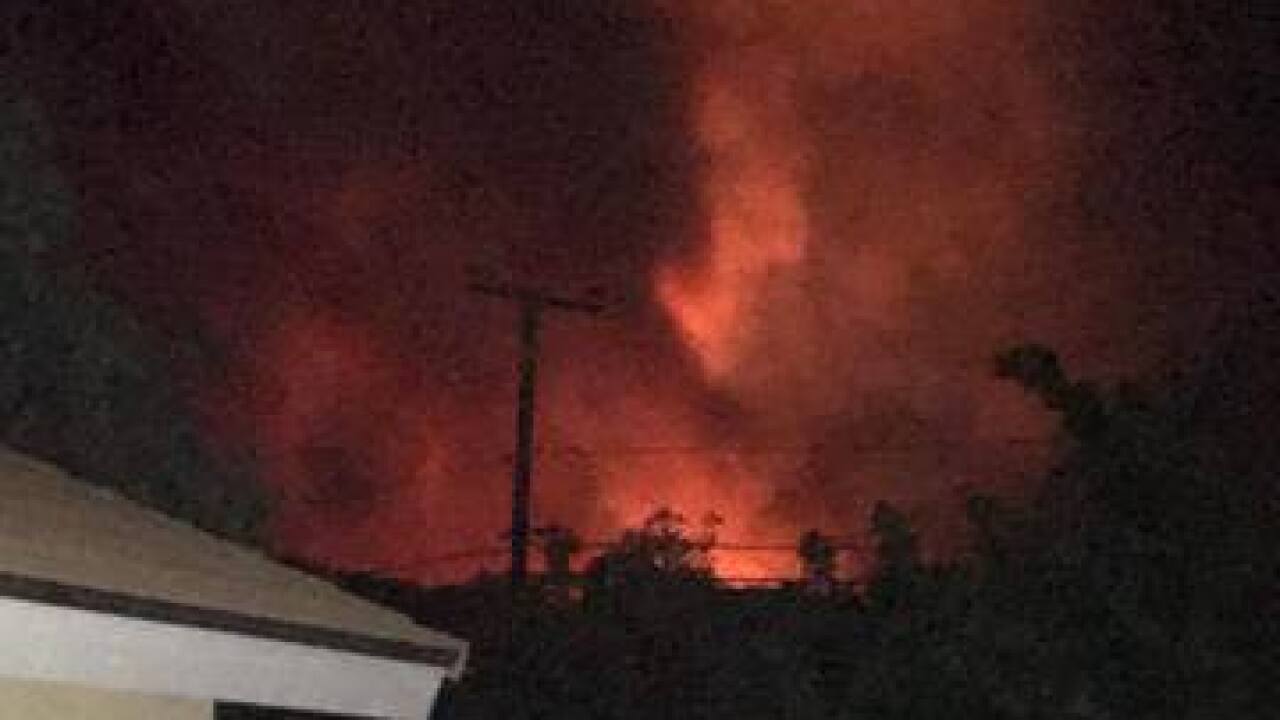 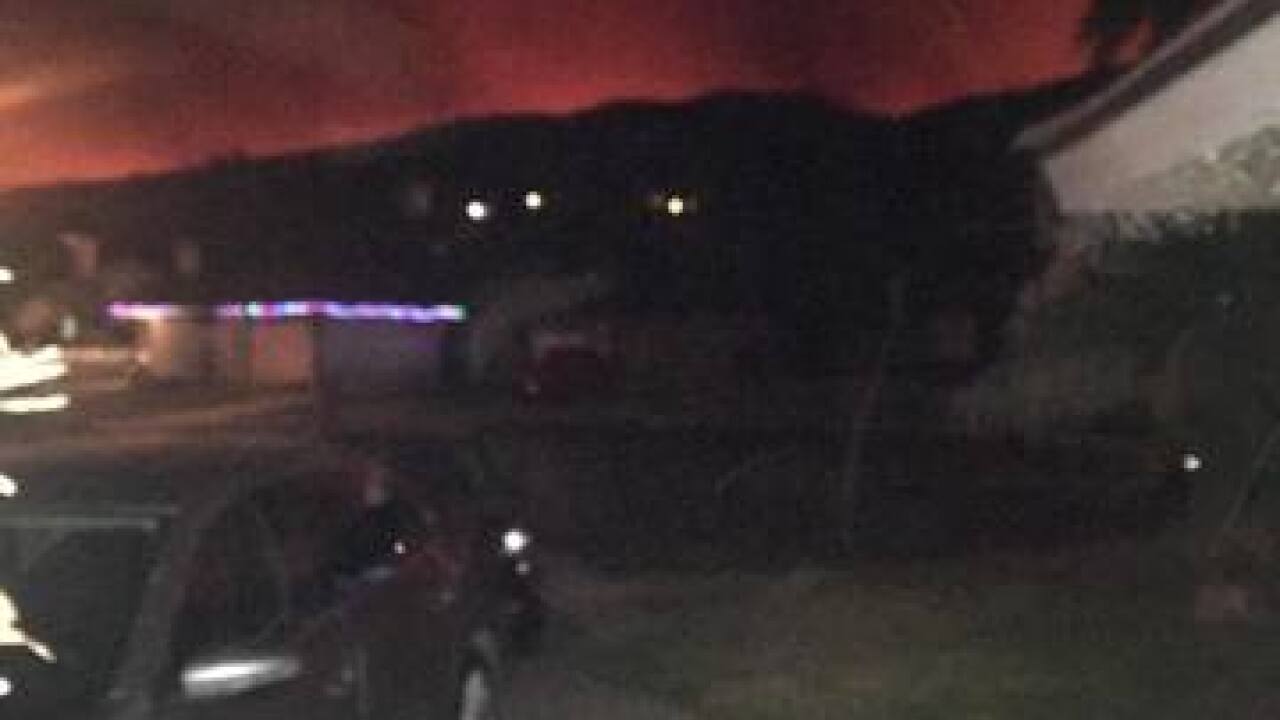 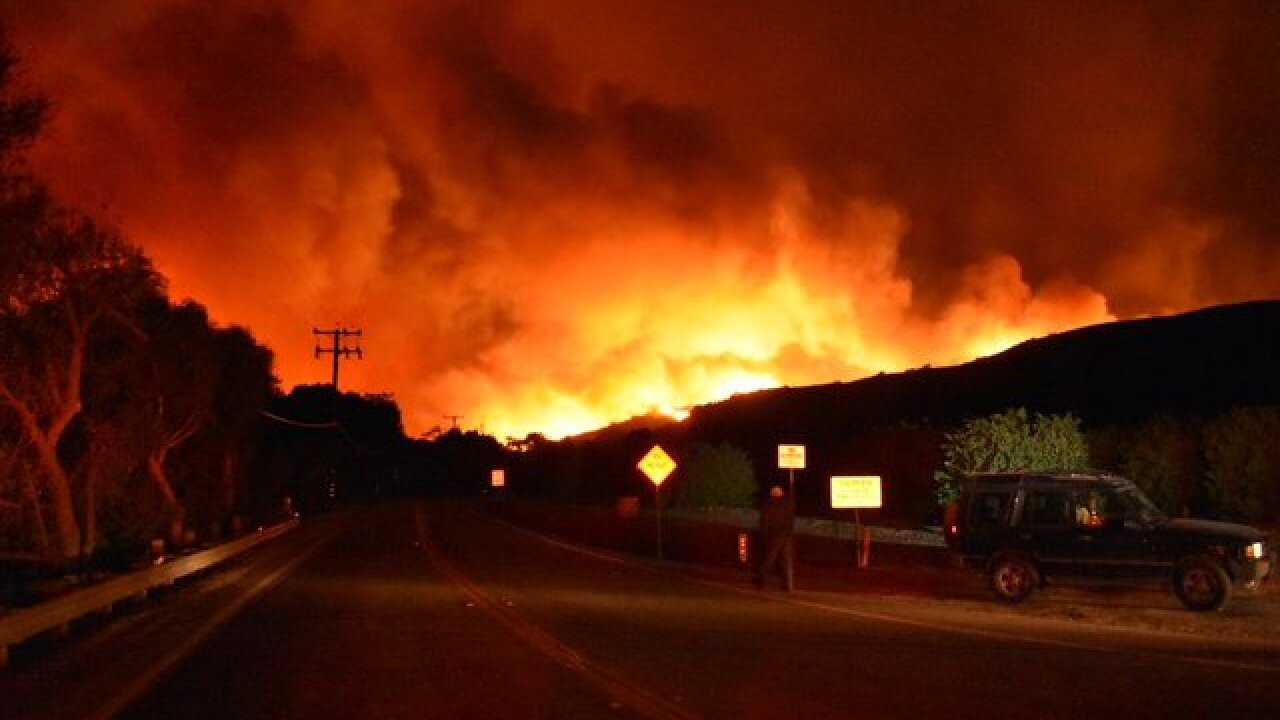 UPDATE (January 12, 2018 9:49 a.m.): The largest fire in California history, the Thomas Fire, is now fully contained, according to Cal Fire.

The Thomas Fire broke out on December 4 in Ventura and burned nearly 300,000 total.

UPDATE (December 28, 2017 8:30 a.m.): The Thomas Fire continues to rage in Ventura and Santa Barbara counties now having burned a total of 281,893 acres. The largest fire in California history is currently 91% contained, according to Cal Fire.

#Thomasfire: Good progress made overnight. 234,200 acres have been burned. 6942 firefighters will continue to battle the blaze today. Be aware of smoky conditions in Ventura and Santa Barbara Counties. Stay indoors if possible. @VCFD, #readyforwildfire, #RSG pic.twitter.com/Q2MJ6e31El

On Tuesday, Route 33 was closed again to the south at Lockwood Valley Road, according to CHP Fort Tejon.

Officials said the Thomas fire has grown to 230,000 acres and is now at only 10% containment.

Monday evening, Route 33 north of Ojai to Route 166 reopened, according to Caltrans.

UPDATE (12/10, 7:17 a.m.): More evacuations have been put in place as crews try to contain the Thomas Fire burning in Ventura County. Officials said the fire has reached 173,000 acres and is only 15 percent contained.

The Santa Barbara County Sheriff has issued an evacuation order for the area from Buena Vista Dr. to Toro Canyon Rd from SR-192 north to Camino Cielo.

An Evacuation Warning for the area from San Ysidro Rd to Ortega Ridge Rd to Toro Canyon Rd from the Pacific Ocean to East Valley Rd.

An Evacuation Warning for the area of San Ysidro Rd to the intersection of Padaro Ln and Santa Claus Ln from the Pacific Ocean to US-101.

An Evacuation Warning for the area from Hot Springs Rd to Buena Vista Rd between SR-192 and East Camino Cielo.

A complete list of evacuations and road closures may be found at: www.CountyofSB.org www.ReadyVenturaCounty.org

The public is reminded to stay vigilant on current fire conditions. Please continue to adhere to road closures and any evacuation orders. Please drive slowly and yield to emergency personnel in the area. As you re-enter your property, be aware hazardous conditions may exist.

UPDATE: (12/7, 7:10 a.m.): California Highway Patrol says Highway 101 is now open in both directions to traffic. They are currently escorting drivers through the fire areas.

UPDATE: (12/7, 6:13 a.m.): Ventura County Fire Department has updated the size of the Thomas Fire. It has now burned 96,000 acres; an increase of six thousand acres in a single night. Containment remains at 5 percent.

Fire crews are preparing for this number to grow dramatically today, as winds as strong as 80 miles per hour could be seen in some areas.

On early again with @ABC7 coverage starting at 4AM with the latest on the #ThomasFire in Ventura Co. Both sides of 101 Fwy now closed at 126 & up to Capenteria area. and there are evacuations in #Ojai. pic.twitter.com/QgXGLnPwTe

The City of Ventura has advised residents to boil water before cooking or drinking.

Failing to boil water before using could result in intestinal or stomach illness.

The city of Ventura sent out a press release stating, "Due to the recent Thomas Fire and power outages, the State Water Resources Control Board, Division of Drinking Water, in conjunction with Ventura Water, are advising residents of Ventura located North of Poli Street and Foothill Road to use boiled tap water or bottled water for drinking and cooking purposes as a safety precaution."

Governor Edmund G. Brown Jr. issued an emergency proclamation for Ventura County due to the effects of the Thomas Fire.

“This fire is very dangerous and spreading rapidly, but we'll continue to attack it with all we've got,” said Governor Brown. “It's critical residents stay ready and evacuate immediately if told to do so.”

The Thomas Fire continues to burn in Ventura County Tuesday night, after charring more than 50,000 acres and forcing nearly 30,000 people to flee their homes.

Officials said Tuesday night that 27,000 people were evacuated and 150 structures were burned. There are also voluntary evacuations in place for Fillmore.

Initial reports indicated the blaze was moving at a fast rate of speed as winds as strong as 20 miles per hour whipped through the area.

The fire quickly charred through 8,000 acres by Monday evening after being reported near State Route 150 and Thomas Aquinas College in Santa Paula. As of 10:30 p.m. Tuesday night, the fire scorched 55,000 acres, according to Ventura County Fire.

Ventura College will be closed on Wednesday and Thomas Aquinas College said on Twitter that classes will be canceled for the remainder of this week.

Ventura Police issued a curfew on Facebook in response to the fire, running from 10 p.m. to 5 a.m. daily, while crews work to put control and contain the fire.

Tuesday night, flames jumped Highway 101 in the Solimar Beach Area, burning on both sides of the freeway, according to KABC. The flames are now heading west toward Solimar Beach, prompting new evacuation orders.  The freeway remains open.

One firefighter was injured in the blaze and has since been released from the hospital, officials said Tuesday.

One person died Monday night in connection to the Thomas Fire, according to Ventura County Fire.

#ThomasFire - confirmed 1 Fatality associated with this fire from a automobile accident. #VCFD @VCFD

There are several evacuation centers for the Thomas Fire, including the Ventura County Fairgrounds.

Ready Ventura County has provided a way for people to donate to the Thomas Fire victims. Officials said anyone can text UWVC to 41444 and 100 percent of the donations will go directly to those affected by the fire. For more information click here.

The cause of the Thomas Fire is still unknown.