Kern Back In Business: Solar industry needing more workers to keep up with growing demand 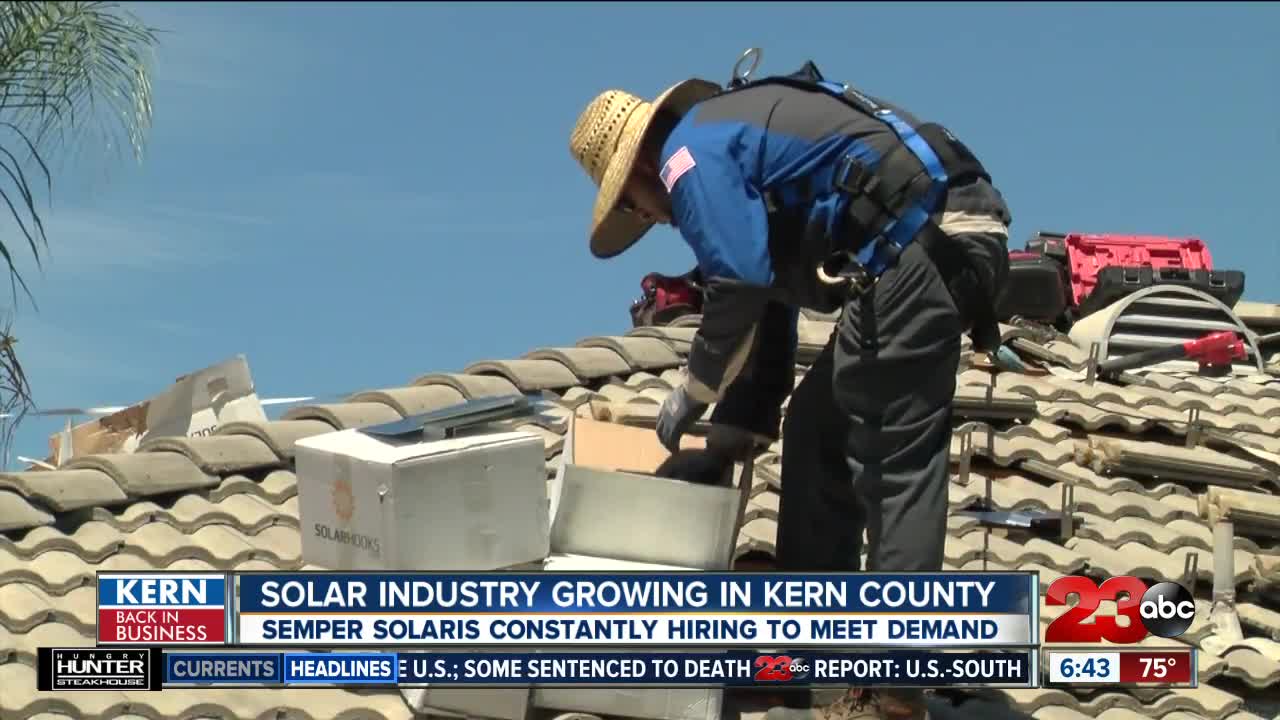 Semper Solaris said they're continuously hiring to keep up with the growing demand for solar in Kern County. They said the best way to apply for one of their jobs is on their website or LinkedIn. BAKERSFIELD, Calif. — Solar it's a booming industry in Kern County. More and more homes throughout the county are adding solar panels to their roofs. Semper Solaris is a veteran-owned solar company with branches in Kern County as well as across the state. And their branch manager said they're hiring needs continue to grow as more and more people turn to solar power.

Adam Zepeda, is a foreperson for Semper Solaris. He said, "It's the way to go. It's the way of the future. You know solar is where's it's at."

Solar panels are popping up on more and more homes around Kern County. Now that we're is in our hottest months, homeowners like Bannon Evans are noticing their energy bill is hurting their wallet more.

Evans said, "As the temperatures get hotter, the prices and the rates seem to go up every single summer. And our bill has jumped 50 to 60 to 80 dollars just in one month."

Now Evans and his girlfriend said they finally decided to jump onto the solar bandwagon.
"You know watching all the commercials and seeing everybody doing it. My mother actually did it. And I was like, well it saved her, why wouldn't it save up here," said Evans.

Jay Lee is the local regional branch manager for the veteran owned and operated Semper Solaris. He said he served in the army from 1988 to 1992.

“[I was a] 77F petroleum supply specialists,” said Lee. “We did API graph testing on fuel that went into planes. Extract the water out so the water don't turn into ice and planes come down."

Lee said his branch currently has openings in two of their positions, as an entry-level permit runner and installer. And they're constantly hiring.

Robert Alva is a senior sales consultant for Semper Solaris. He said the reason why they need more installers is because the solar industry is growing in Kern County.

“The three main reasons why people go solar is to be able to control their bill, so they can predict their bill and then protect their bill for the next 25 years against the raising cost of the utility," said Alva.

One of Semper Solaris's employees who's riding the solar wave is Adam Zepeda. He worked for a different solar company before switching to Semper Solaris a couple months ago.

“Well I changed because I know a couple of people that work for this company,” said Alva. “It's a veteran-based company. And being myself an ex-military, a Marine Corps veteran, it was just a natural fit."

Zepeda is hoping to work his way up the ranks at Sempar Solaris. One day he hopes to lead his own unit as a regional branch manager. Until then he said those in his troop focus on one key aspect.

Lee said entry-level positions start at $16 dollars and go up based on experience and position. The best way to apply is online then prepare for an in-person interview with a background check. Lee said despite the qualifications needed vary for the different position, he's looking for the same mindset for his future employees.

“The right person, the right attitude, that can come in and fit with the type of the environment that we have with the same mind frame which is growth," said Lee.

And for those veterans looking for jobs, Lee has this message for you, “If you're a veteran that only enhances your chances.”

Lee said they need a team of four to install a solar system at a home. And it normally takes them about 10 hours.

To apply you can visit the Semper Solaris website or you can apply on LinkedIn.