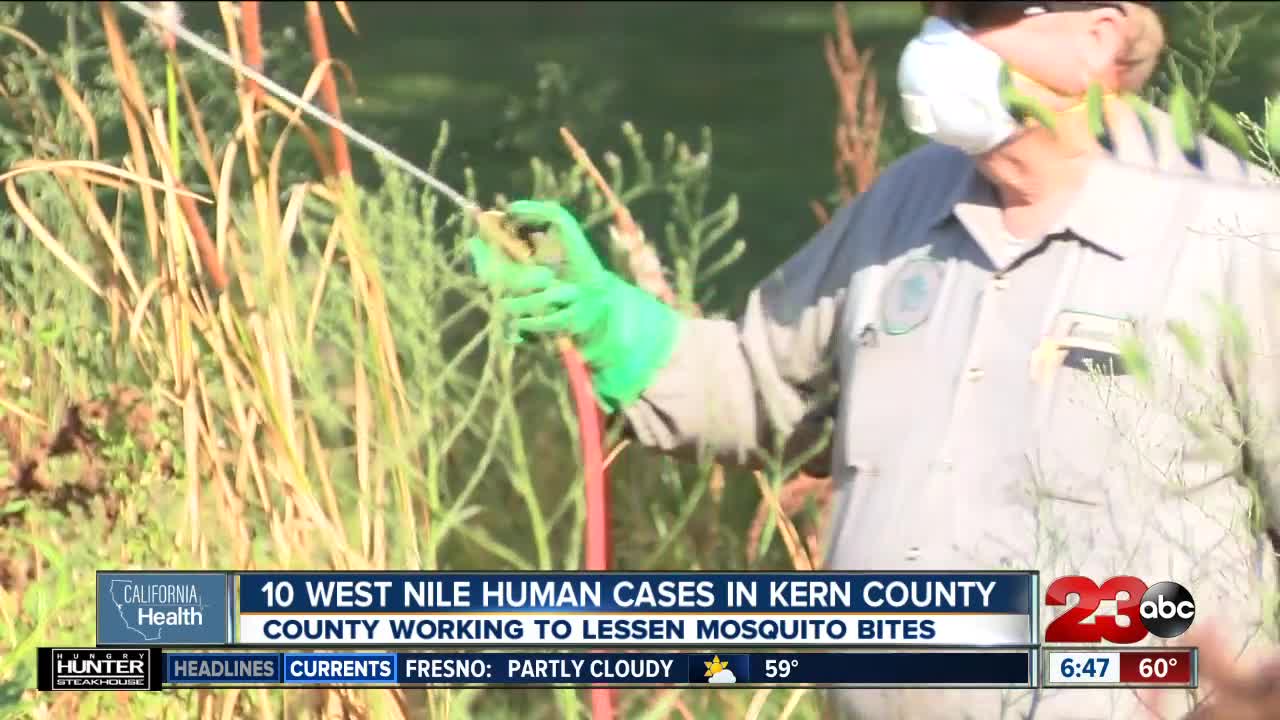 West Nile Virus has been in Kern County since 2004. County vector and the Department of Public Health are spreading awareness to try to contain bites and the disease.

BAKERSFIELD, Calif. — The weather is cooling, but it’s still mosquito season. And with mosquito bites comes the possibility of diseases.

Officials at the Kern County Department of Public Health said West Nile Virus is the most common mosquito transmitted disease in Kern County. Last week health officials confirmed the number of West Nile cases is Kern County is up 10 people and 1 horse. And limiting mosquitoes can limit the spread of this disease.

Kevin is an area foreman for Kern Mosquito and Vector Control. His coworker Terry Knight said their job is to limit the spread and bite of mosquitoes in Kern County. At Haggin Oaks Park they’re trying to spray to kill mosquito larva before they reach the adult phase and start reproducing.

“The number of eggs each female can lay is between 250 to 350 eggs, that’s per deposit," said Knight. "And she can lay eggs multiple times.”

Not only can mosquitoes be annoying when they bite you, but they can also spread disease. For the last 15 years there’s been one virus of particular concern.

“Here in Kern County, since 2004, West Nile Virus has been a major concern,” said Knight.

This year the Kern County Department of Public Health has confirmed 11 cases of West Nile Virus. 10 in people and 1 in a horse. And Knight is expecting that number to double, “It looks like we’re on track for 20 to 25 humans again here in 2019.”

Kimberly Hernandez is a Public Health assistant director of health services. She said while the normal West Nile Virus season is April to October, there’s still a concern for the rest of the year.

“There are some years where we have West Nile Virus activity that goes through December," said Hernandez. "So it just depends on the year. And it’s awfully hard to predict unfortunately, a lot of it is just watching how many mosquitoes we have out there.”

Hernandez said in most case someone doesn’t know they have West Nile, however in 20% of case the person can experience a terrible headache and a rash while in more extreme cases.

“A very small proportion of people can develop symptoms that can include meningitis and encephalitis," said Hernandez. "And so those are very rare, but they are very severe cases that do happen. And an even small proportion, its even smaller cases West Nile can be fatal.”

Knight said how many mosquitoes and cases of West Nile Virus in Kern County is based on a couple of things, what the weather is like, how much area his sprayers can treat and if homeowners are doing their part.

“If you have standing water on your property, dump that water. If you remove that water you’ve removed any possibility of any mosquito to breed in your front or backyard. Not only are you helping yourself you’re helping your community.”

Hernandez said a mosquito only needs a tablespoon of water to lay their eggs in. While Knight points out if you’re not going to use or treat your pool during the off-season to drain the water.

“If the water is green and it has a bacterial culture on it that female mosquito will probably lay eggs on that surface of the water if it’s ready. A blue or chlorinated clean pool that is not the case,” said Knight.

Knight and Hernandez said it’s important for everyone to do their part to limit mosquitoes from breeding and biting us.

“It only takes the bite of one infected mosquito to infect you with West Nile Virus and possibly make you ill.”

Hernandez and Knight added these tips to lessen your chances of getting bite, most mosquitoes are out during dawn and dusk.
So wear long sleeve and pants during those hours as well as wear bug spray with DEET. Finally if you experience that terrible headache and a rash after a bite to seek medical attention.