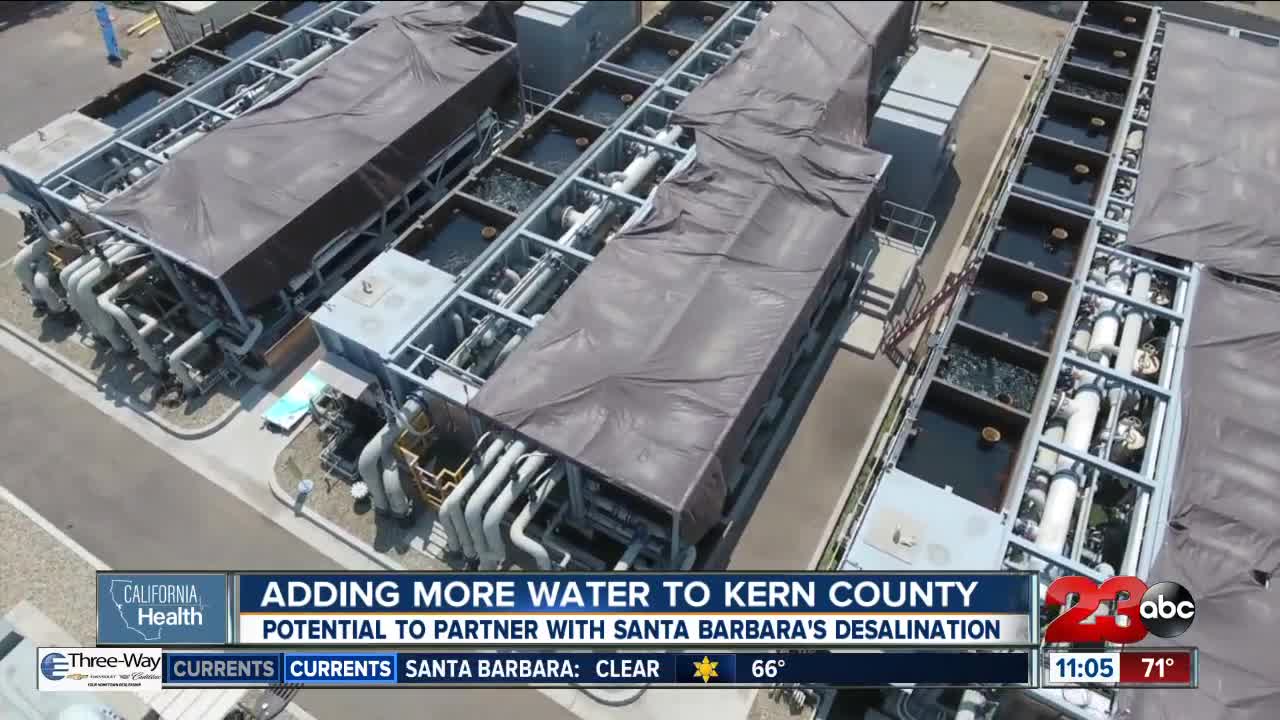 Santa Barbara uses desalinated water to help their water needs. They are also willing to partner with other communities and share their water resources.

SANTA BARBARA, Calif. — Water is one of California's biggest needs. In Kern County, there are three types of water sources: ground water, state water from canals and surface water from the Kern River. Santa Barbara has similar access to their own ground water, state water and surface water; but they use the Pacific Ocean to help offset their water needs.

The Kern River, it brings about 760,000 acre feet of water to the valley a year. In 2014 the Kern County Water Agency found that The Kern River only made up 21% of our water supply. That water is needed to keep Kern County as one of the most productive agriculture counties in the country and for our daily use.

Joshua Haggmark is the water resource manager for Santa Barbara. He said, "We're more water than we are of anything else. It's the core function of making all of our body works."

In 2014 the Kern County Water Agency found that 37% of our water came from groundwater, however they also found our groundwater has been dropping since the 1940s. During California's drought from 2011 to 2017 Santa Barbara turned to desalination when their water supply was low and now make ocean water usable.

"For us it's all about diversity," said Haggmark, "that's how we're going to solve our water supply situation here. So we've diversified in such a way that at any one time the city can count on or pool upon state water, local surface water from Cachuma or Gibraltar, ground water, recycled water, and then of course desal."

Haggmark said this is how Santa Barbara's desalination plant works: it pulls water out of the ocean here using marine life friendly pumps, then the water gets run through filters that remove everything from the water except the salt. To remove the salt the water gets pushed through reverse osmosis membranes to create half clean water and half twice as salty water called brine. That brine is mixed with treated city wastewater, cleaned and returned to the ocean. The city then adds minerals to the clean water to make it drinkable. When the process is finished the plant will make about three million gallons a day, which equates roughly to just over 3,000 acre feet a year.

When asked why Californians don't use the largest body of water in the world, the Pacific Ocean, more, Haggmark responded, "It really comes down to cost. It's still one of the more expensive sources of water, but I think more and more as we struggle to meet the demands of our communities it looks more and more affordable, And as I've mentioned at less than a penny of a gallon."

If California goes into another drought and Kern County needs an extra supply of water, Santa Barbara is open to partnering with communities like Kern County.

"We're able to do exchanges with people, so you could in theory have someone in the Central Valley be a partner in desal," said Haggmark. "And in exchange they would take our state water and we would take the desal water that's here. It gives you an opportunity because of the state water project to have those unique relationships."

Haggmark said desalinated water is currently between two times to seven times as expensive as groundwater. But if our future droughts worsen and desalination technology becomes cheaper there's a chance desalinated water could help with Kern County's water supply.

Also a water exchange wouldn't be new for Kern County and Santa Barbara; it was done before and during the last drought.

Right now there are 17 desalination plants either open or being built in California. In September UC Berkeley announced the United States Department of Energy awarded their Berkeley Lab $100 million dollars over the next five years to find a way to improve desalination technology and bring down the cost of desalinated water.