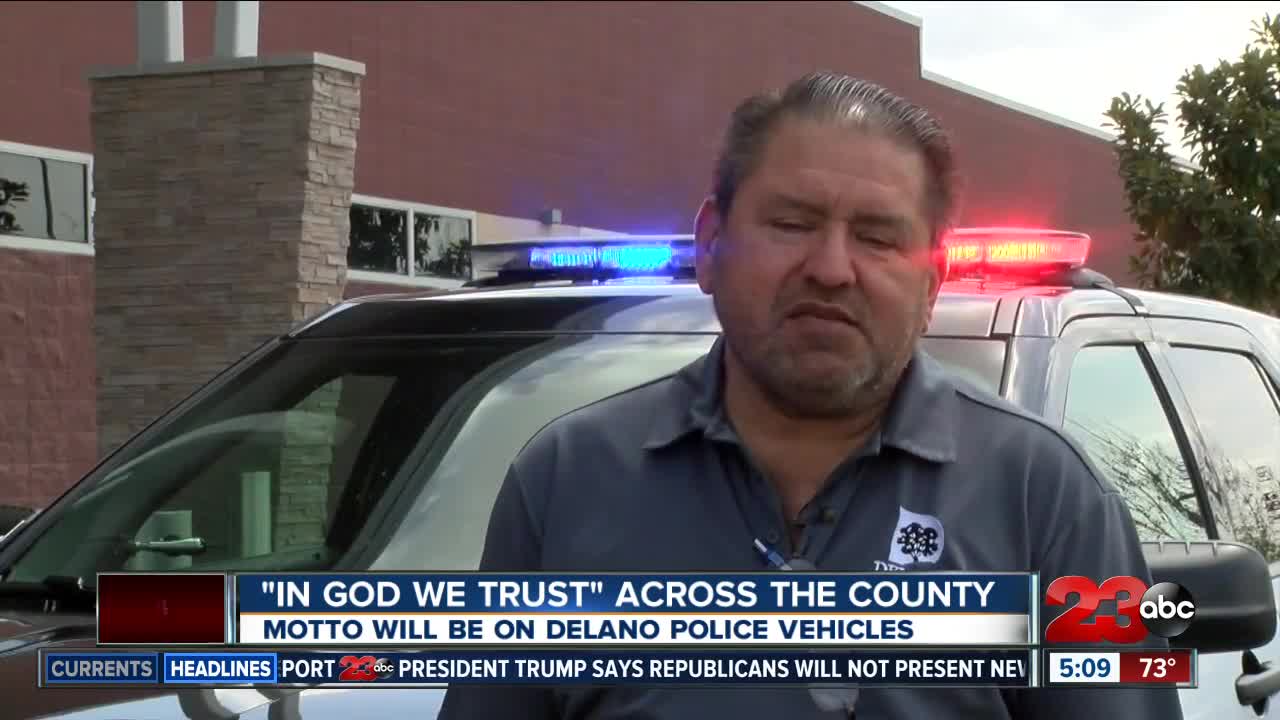 BAKERSFIELD, Calif. — The Delano Police Department will soon be showcasing the nation's motto, "In God We Trust," on all police cars.

23ABC News spoke with Bakersfield City Council member Jacquie Sullivan as well as the Mayor of Delano who both believe the motto will be a positive shift for the community.

In 2002 Sullivan helped pass legislation in the City of Bakersfield to ensure all government buildings in the city displayed the phrase, 'In God We Trust,' somewhere on each building. Soon after many other cities across the state also adopted the phrase, “There are now a 136 cities and counties in California that are displaying 'In God We Trust' in their council chambers,” Sullivan said.

Last night Delano City Council also voted to adopt the phrase into the Delano Police Department after a three to one vote majority sided with the motto, “The fact that we already have 'In God We Trust' on our city building and city hall and the council chamber it was a very smooth transition to get it approved on our city law enforcement vehicles," Delano Mayor Joe Aguirre said.

According to Aguirre the renewed interest in Delano surrounding our nation’s motto started with Pastor David Vivas and his efforts behind the scenes, “It was just something that I had been doing some research on and I had been thinking about and heard other agencies across the nation were doing this. But I believe Delano is the first city in California to have this done on our police vehicle, and it’s something I was very happy to see approved by our city council," World Harvest International Church Pastor David Vivas said.

City council member at large Bryan Osorio said he voted no on the proposal because of the first amendment's separation of church and state. He said, “Even though the phrase, 'In God We Trust' is used throughout the country it would trigger a religious connotation that we all believe in a higher being, but that there are people who don’t believe in a higher power in Delano.”

However, Vivas said it will not infringe on the rights of the people of Delano,"It’s a motto it’s not something we are infringing upon the rights of those who may not believe in a Deity or a God but because this is a national motto this is a sign of patriotism we love our country, we love America and we love our police department.”

City officials said they are still working to determine where the phrase, "In God We Trust," will be located on the police cars but that the cost will be very minimal.