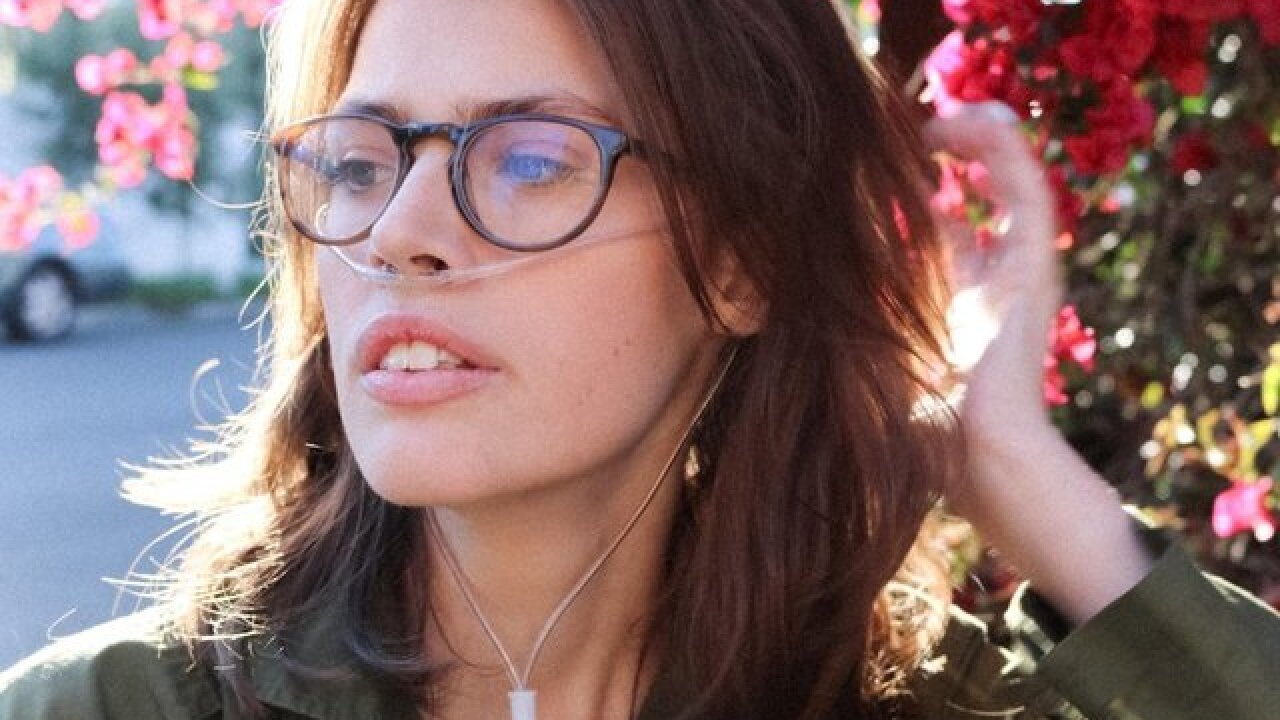 Cystic fibrosis did not define Claire Wineland. She did.

No matter the obstacles placed in front of her, of which there were many, she refused to be pitied and was determined to live a life that mattered. She inspired countless people, invited -- no, demanded -- honest talk about illness and mortality, and brightened the worlds of those she touched with her smile, spunk and spirit.

On Sunday evening, after being taken off life support and using the newly transplanted lungs she received just one week earlier, Claire took her last breath. The cause of death was a massive stroke she suffered soon after the transplant surgery. She was 21.

A quarter of Claire's life was spent in the hospital. The medical team that tended to her became family. She played hide-and-seek with nurses and left explosions of glitter in her wake. She watched one of her doctors squirm as he gave her the safe-sex talk. She took great care to decorate her hospital room so it felt and looked like home.

Her parents, Melissa Nordquist Yeager and John Wineland, split up when Claire was 3, but they remained friends and partners in her care.

Her father credits Claire with teaching him "to not be afraid of what hasn't happened yet" and to learn to "love what is."

Yeager, who lost and quit jobs as hospital stays dictated, always marveled at her daughter's aura and her ability to lift up those around her.

In 2017, Yeager recalled a conversation with Claire about death. At one point, Claire looked at her mom and said, "After you die, you're closer to everyone you love because you're part of everything," Yeager remembered.

These words were a gift, a reminder that Claire would remain with her always, even after she was gone.

More than 30,000 people in the United States, more than 70,000 worldwide, have cystic fibrosis, according to the Cystic Fibrosis Foundation . The median survival age is 40, the foundation reports, which is a great improvement from the 1950s, when surviving long enough to attend elementary school was rare.

The genetic and progressive disease creates an overabundance of mucus, which traps infections and blocks airways in the lungs. It also complicates digestion, affects the pancreas and other organs and, eventually, leads to respiratory failure.

There is no cure, but dutiful breathing treatments -- which eat up hours each day -- can help with symptoms and complications. A double-lung transplant, when successful, can add years to a patient's life.

Claire's parents learned to trust their independent and strong-willed daughter. When it came to her care, she knew her body best -- what worked for her, what didn't and how far she was willing to go.

So when she became a legal adult and told them she had no intention of getting a double-lung transplant, they had to accept her decision, even if it pained them.

"I had to be honest," she once explained. "It's not for me and never has been."

A change of heart

Claire took the gift of life and her health seriously, but she didn't take herself too seriously. She once escaped from the hospital so she could attend a Bernie Sanders rally. She laughed at the absurdities that often swirled around her, including those moments in the produce aisle at Whole Foods when shoppers would prescribe her unsolicited "cures," telling her to eat more pineapple or that a mushroom cleanse would take care of everything.

She was of the mind that she would leave this world with the body she came in with. She'd travel, answer calls for speaking engagements and put energy into her foundation , which she set up at age 13 after coming out of a 16-day medically induced coma. She'd work on a book -- promising it wouldn't be "another happy sick person book" -- and appreciate the small things like swims in the ocean for as long as she was able.

At a TEDx talk she gave last year, Claire made a point of saying how cystic fibrosis helped give her a quality of life.

"Life isn't just about being happy. ... It's not about how you feel second to second," she said. "It's about what you're making of your life and whether you can find a deep pride in who you are and what you've given."

Claire had a change of heart about transplant earlier this year, prompted by a steep decline in her health that robbed her of the energy and ability to do what gave her joy and purpose. She wasn't done contributing. It was a welcome, albeit terrifying, development for those who loved her.

To get on the list for new lungs, she had to be sick enough to need them, yet strong enough to withstand the surgery and recovery. Some people worried that she'd waited too long and wouldn't be given the chance at continued life.

But Claire took on the evaluation process to get on the list with laser focus. She sat in an educational meeting at UC San Diego Health's transplant center and diligently took notes.

Revealed on her left ankle was a tattoo: the thumbs-up "Don't Panic" logo from "The Hitchhiker's Guide to the Galaxy."

She listened to the risks and the long list of side effects and emerged unfazed.

"None of it spooked me," Claire said afterward. "Now that I'm looking at it as something I have to do ... I'm willing to deal with anything."

In late May, she made the list and shared the exciting news with her social media followers who dot the globe. But then, a mix of health and life complications took a toll and knocked her off the list, temporarily. By mid-August, she was back on and feeling ready.

She'd worked hard to get there, was focused on her self-care and getting stronger. She joked that the squats she was doing, upon doctor's orders, would help get her more than lungs. She'd also get a butt.

She knew that the call could come at any minute, and on August 26, it did.

"It's a GO!!!" she posted on Twitter, not long before she was wheeled into the operating room in San Diego. "See y'all on [the] other side."

The nine-hour surgery went well, and her mother reported that the lungs were working great. Yeager posted a video of herself doing a happy dance with friends in the waiting room.

But not long after the successful surgery, hope turned to fear. Claire suffered a stroke when a blood clot cut off blood flow to the right side of her brain. She never emerged from her medically induced coma. Despite emergency surgeries, and what her mother described as "Herculean efforts" to try to save her, the daughter she knew was gone. Given the severity of the stroke and Claire's advance directive, it became clear that it was time to let her go. She passed away peacefully, with her parents by her side.

"They saw her into this world for her first breath and were with her for her last," Laura McHolm, the board chair for Claire's foundation, wrote in a Facebook post.

Less than 3% of lung transplant recipients have a stroke between the surgery and hospital discharge, according to the United Network for Organ Sharing , which operates the nation's organ transplant system.

Claire, who understood the importance of organ donation, was a donor herself. On Monday afternoon, her mother received word that Claire had already made a difference.

"Claire was able to save the life of two people, her right kidney was transplanted to a 44 year old woman in San Diego, and her left kidney was transplanted to a 55 year old male in Northern California. Also, Claire's corneas and tissue was recovered and she will be able to enhance the life of up to 50 people," a family services specialist wrote to Yeager in an email message. "Claire's gift is huge, I want your family to know that your daughter is a hero."

The family intends to honor her memory by continuing to advance Claire's Place Foundation , which she established to financially support others affected by her lifelong disease.

In one of the last videos Claire posted, she went where she hadn't before.

A self-described "goofball," she usually engaged people with humor and optimism. This time, she was raw and allowed herself to cry. As she faced the prospect of getting a double-lung transplant, she understood how desperate she was to live -- and give -- more.

"It hurts everything inside of me to make this video," she said into the camera. "I didn't realize how much I didn't expect to live this long. I didn't expect to have a chance. ... The years of telling myself I can do it on my own are over."

She had plenty of emotional support, but she worried what transplant surgery might mean for her future and her parents' future if it didn't go well. What if they poured everything into her transplant, and she didn't make it or was not able to work again, she explained later. She needed financial help. By asking for it, she said, she could relax and get in the headspace for whatever would come next.

Before signing off, Claire implored viewers to do one thing.

"Go enjoy your life. Really. I mean that seriously," she said with her signature smile and laugh, her eyes not yet dry. "Go enjoy it, 'cause there are people fighting like hell for it."