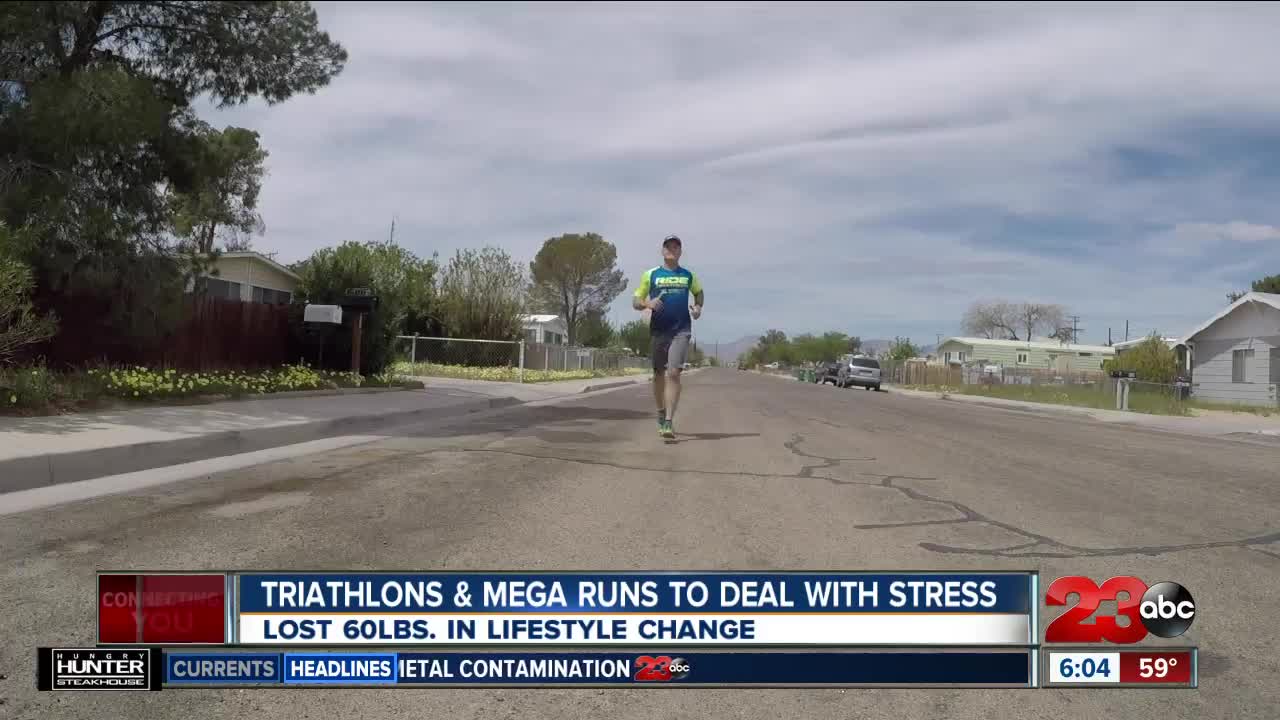 RIDGECREST, Calif. — From stressed out and overweight -- to motivated with a message. One Kern County Sheriff’s sergeant took on-the-job stress that made him overweight and unhealthy and is now leading by example for a positive life for those he’s sworn to protect.e

“Last year I did the Super Frog Half Ironman again and I did the Arizona full Ironman,” said Sgt. Frisbie

This is the third season Sgt. Johnny Frisbie has done various triathlons and mega runs. He has also competed on the Baker to Vegas for the law enforcement competition for the Kern County Sheriff’s Office team.”

Frisbie he has been in law enforcement for 15 years. Before that he was in the navy for eight years. He says the stress of his job has taken a toll on him.

“You know over time it just kind of wears on ya I think," said Sgt. Frisbie. "I noticed my health was just going downhill from my 20s. I noticed I hit my 30s and it just starting going downhill.”

He said he was stressed, would get headaches, nosebleeds and would take blood pressure medication. At his heaviest he was 225 pounds. That’s when he looked in the mirror and decided it was time for a change. He started jogging. Then once he lost a little weight a friend challenged him to compete in a race.

“I was like ok, might as well. I started training for it. I did the first one in 2017, June Lake, you know the Olympic triathlon. I’ve been hooked ever since,” said Sgt. Frisbie.

Being hooked has turned into a lifestyle. He’s downloaded new apps --- he turned his spare bedrooms into a cycling room and he trains. He's now down to around 165 pounds.

Sgt. Frisbie said, “During the weekday they’re about an hour, hour a piece. Then Saturday is my long day, we’ll go anywhere from an hour and a half to three and a half hours.”

He continued. "Based on where I was a few years ago, I wouldn’t have believed it. But as the Ironman saying goes, ‘anything is possible.’ You have to believe it to be what you want to be. You have to make the change.”

A change Sgt. Frisbie said anyone can do. “It’s all about time on feet and stick with the regiment.”

That regiment helped him lose over 60 pounds, competed in over a dozen races, helped KCSO beat Bakersfield Police in this year’s Baker to Las Vegas run and has helped him become a better officer, husband and father.

“Coming home I think it has helped me you know in everyday life. Maybe not being so stressed out and letting things get to me and I think having more patience,” said Sgt. Frisbie.

Frisbie is now trying to spread the message that anyone can do what he’s done. And he said it helps him feel more youthful.

“Kind of brings me back to you know that drive and stuff that he had you know in my 20s," said Sgt. Frisbie. "You know my work ethic and everything. So it’s nothing that I see stopping anytime soon. I don’t see stopping until I get well into my 60s I think.”

Sgt. Frisbie competed last Saturday, May 4th, in a half Ironman in Utah. He said he finished in 5 hours 19 minutes finishing 65th for his age group and 491st out of 2,300 competitors.

If you would like more information about learning how to train for a triathlon visit this website: active.com