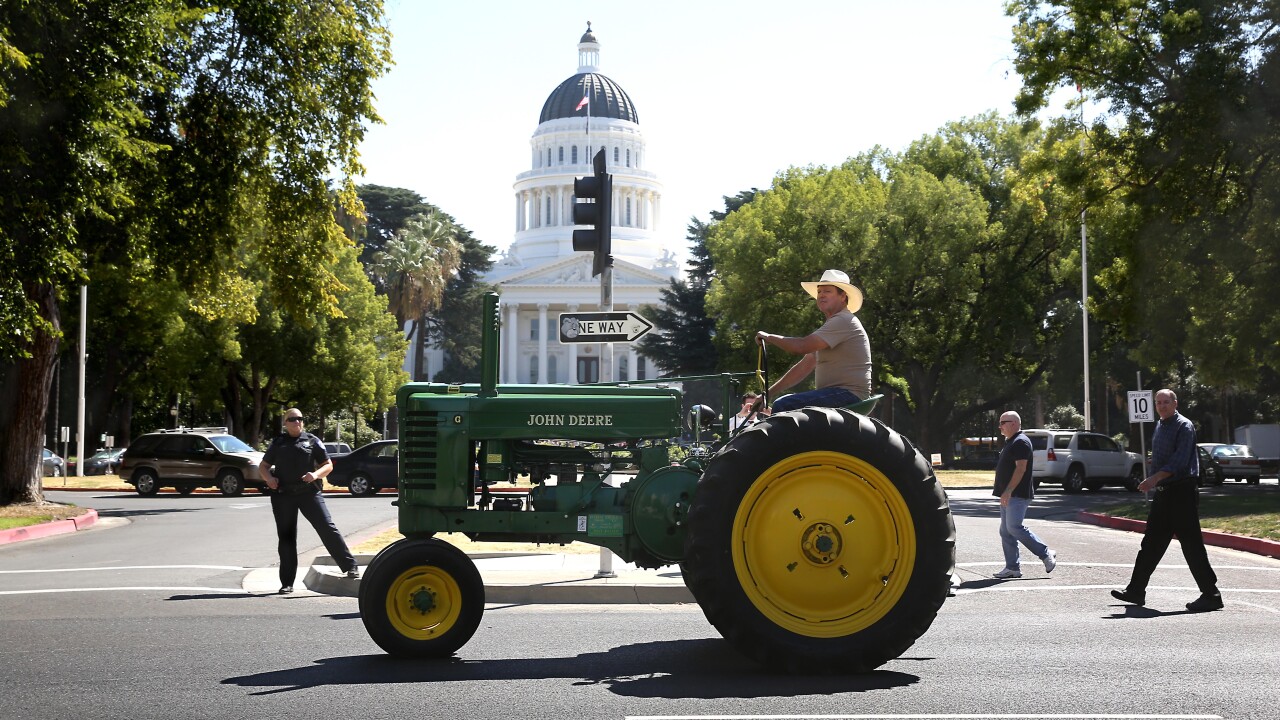 Rich Pedroncelli/AP
One of the dozens of tractor owners in a parade down Capitol Mall to kick-off the 2014 Farm-to-Fork Celebration passes the state Capitol in Sacramento, Calif., Friday, Sept. 12, 2014. The two-week long event showcases local agriculture and restaurants.(AP Photo/Rich Pedroncelli)

WASHINGTON (AP) — Hoisting the spoils of victories in California’s hard-fought water wars, President Donald Trump is directing more of the state’s precious water to wealthy farmers and other agriculture interests when he visits their Republican Central Valley stronghold Wednesday.

Changes by the Trump administration are altering how federal authorities decide who gets water, and how much, in California, the U.S. state with the biggest population and economy and most lucrative farm output. Climate change promises to only worsen the state's droughts and water shortages, raising the stakes.

Campaigning in the Central Valley farm hub of Fresno in 2016, Trump pledged then he’d be “opening up the water” for farmers. Candidate Trump denounced “insane” environmental rules meant to ensure that enough fresh water stayed in rivers and the San Francisco Bay to sustain more than a dozen endangered fish and other native species, which are struggling as agriculture and development diverts more water and land from wildlife.

Visiting Bakersfield in the Central Valley on Wednesday, Trump is expected to ceremoniously sign his administration’s reworking of those environmental rules. Environmental advocates and the state say the changes will allow federal authorities to pump more water from California's wetter north southward to its biggest cities and farms.

The Trump administration, Republican lawmakers, and farm and water agencies say the changes will allow for more flexibility in water deliveries. In California's heavily engineered water system, giant state and federal water projects made up of hundreds of miles of pipes, canals, pumps and dams, carry runoff from rain and Sierra Nevada snow melt from north to south — and serve as field of battle for lawsuits and regional political fights over competing demands for water.

Environmental groups say the changes will speed the disappearance of endangered winter-run salmon and other native fish, and make life tougher for whales and other creatures in the San Francisco Bay and Pacific Ocean.

After an initial study by federal scientists found the rule changes would harm salmon and whales, the Trump administration ordered a new round of review, California news organizations reported last year.

The overall effort “ensured the highest quality" of evaluation of the rule changes, Paul Souza, Pacific Southwest director for the Fish and Wildlife Service, which is under the Interior Department, said in a statement Tuesday.

“We strongly disagree that the proposal will reduce protections for endangered species," Souza said.

Beyond operational changes in the federal Central Valley Project water system, the administration's changes allow for more habitat restoration, upgrades in fish hatcheries and the water system itself, monitoring of species and other improvements, Souza said.

Careers of California politicians can rise and fall on water issues. It's often rancorous, as when Republican Rep. Devin Nunes in 2017 celebrated passage of a House resolution weakening environmental protections by tweeting a photo of cupcakes decorated with Delta smelt, a Northern California fish nearing extinction.

Trump mocked environmental limits on water deliveries in California in his 2016 campaign visit, saying they were all about “a certain kind of 3-inch fish," the smelt.

“The species really are in much worse shape” than in earlier years, Doug Obegi with the Natural Resources Defense Council said. “We are at the point where we may watch them wink out ... potentially in the next few years.”

Another big change alarming conservation groups and some water agencies outside of Southern California is the pending award of a permanent federal contract from the Bureau of Reclamation to Westlands Water District, a Central Valley-based water agency that is the nation's largest irrigation water district.

The then-Republican-led Congress in 2016 approved legislation allowing California water agencies to pay to make their federal water contracts permanent. Westlands has jumped toward the front of the line, closing its public comment period last month.

In December, Gov. Gavin Newsom’s administration said it planned to sue the Trump administration over their proposed new rules, saying they do not do enough to protect endangered species.

That lawsuit still has not been filed. Wade Crowfoot, secretary of the California Natural Resources Agency, said state officials are still negotiating with the Trump administration about whether they would change the proposed rules to address the state’s environmental concerns.

“From our perspective, if we can resolve our concerns and ensure adequate protection of these endangered species, then we think it would be important to do so and we could avoid probably years of litigation,” Crowfoot said.