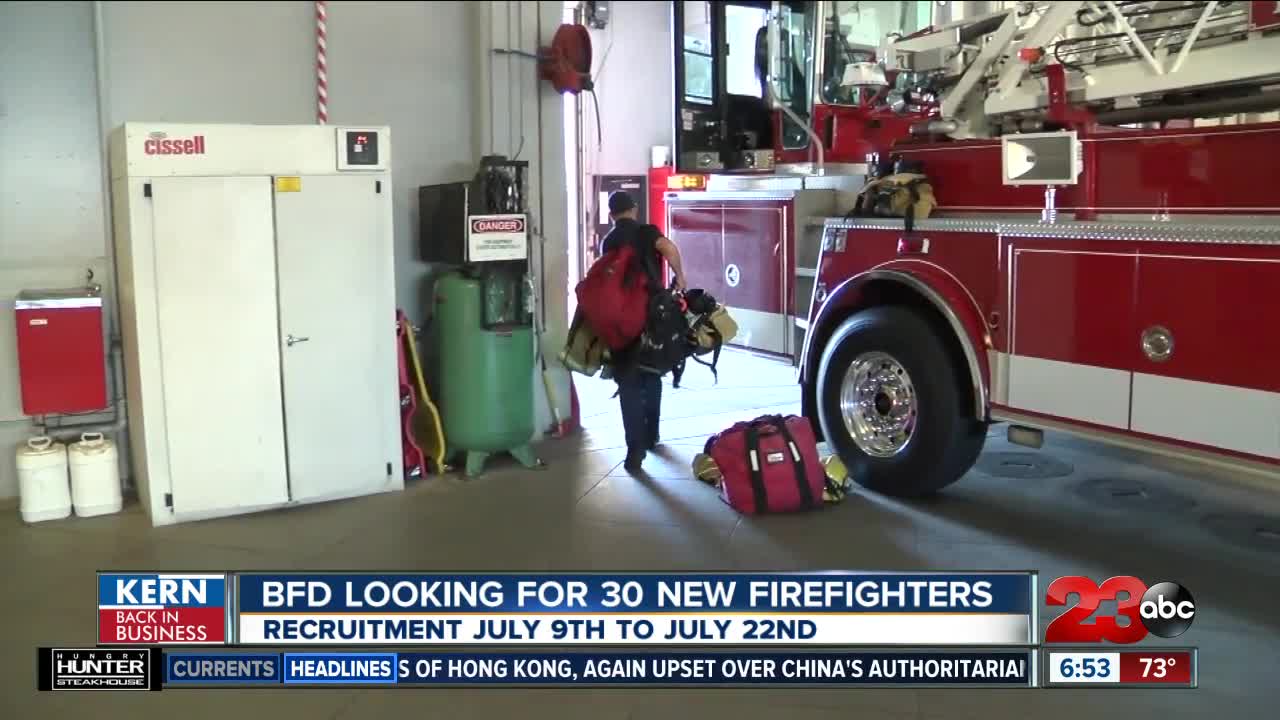 Bakersfield Fire Department is having a hiring recruitment from July 9th to July 22nd. They're looking to hire 30 new firefighters to fill in for those who have recently been promoted. Wyatt Paxson is only a couple months into his career with the Bakersfield Fire Department. He said, "My whole family is first responders and so it's been a dream of mine to be a firefighter."

Wesley Howard was hired a couple of months before Paxson. Howard said, "I love being a firefighter and all the tasks that come with it."

The Bakersfield Fire Department is a second family for their firefighters. Howard has been roaming the halls of station one since he could walk. He has a picture of him riding with his uncle in one of the fire engines. Now he's wearing the BFD uniform to serve his community.

"It's a pretty rewarding experience," said Howard. "I don't know. I'm honored to be here. I think about it every day. That picture then to where I'm at now, it's pretty cool coming to work every day."

It's that family atmosphere that motivates these Bakersfield firefighters to serve their city.

Paxson said, "The thing that I like the most about working with Bakersfield Fire is the family feeling. The camaraderie with the guys. And it just feels like everyone is here for you when it comes to if you need something, they're willing to help."

"It's just to fill all the positions that we need," said Snow. "There's been a lot of promotions lately, a couple of new positions have opened up, so it's time to fill in from the bottom with some firefighters who are hungry and eager to serve the community"

To be eligible to be hired, an applicants need to have their firefighter I certificate, emergency medical technician certificate and physical ability test certificate.

"We're looking for certain intangibles from individuals looking to be a part of our department," said Snow. "Very team oriented, willing to put in the work and ultimately willing to serve that is part of a team. That's our mission."

Howard said it's that team spirit that helped him stay safe and stood out when he went to his fire structure fire. "There's fire rolling over you on the top of the hallway, smoke coming out of the doors and windows. You trust a lot on your crew. My captain was there with me. And following his guidance and his assessment of the situation. There's a lot of trust that goes into that environment."

For those looking to join the BFD team, Paxson said becoming a firefighter takes as much mental strength as physical. "Study up. There's a lot of books out there that will help you achieve the grades that you need and help you learn the test to be able to pass."

Both Howard and Paxson are early in their Bakersfield Fire careers. A career Howard hopes will led to him mentoring the next generation of Bakersfield firefighters.

"At some point when I know it's my turn to promote and to serve the department in the next rank and so on. I'll take those steps when appropriate," said Howard.

For more information on the requirement needed to apply and how to apply visit Bakersfield's website.