County Public Health explains where incomplete testing is stemming from 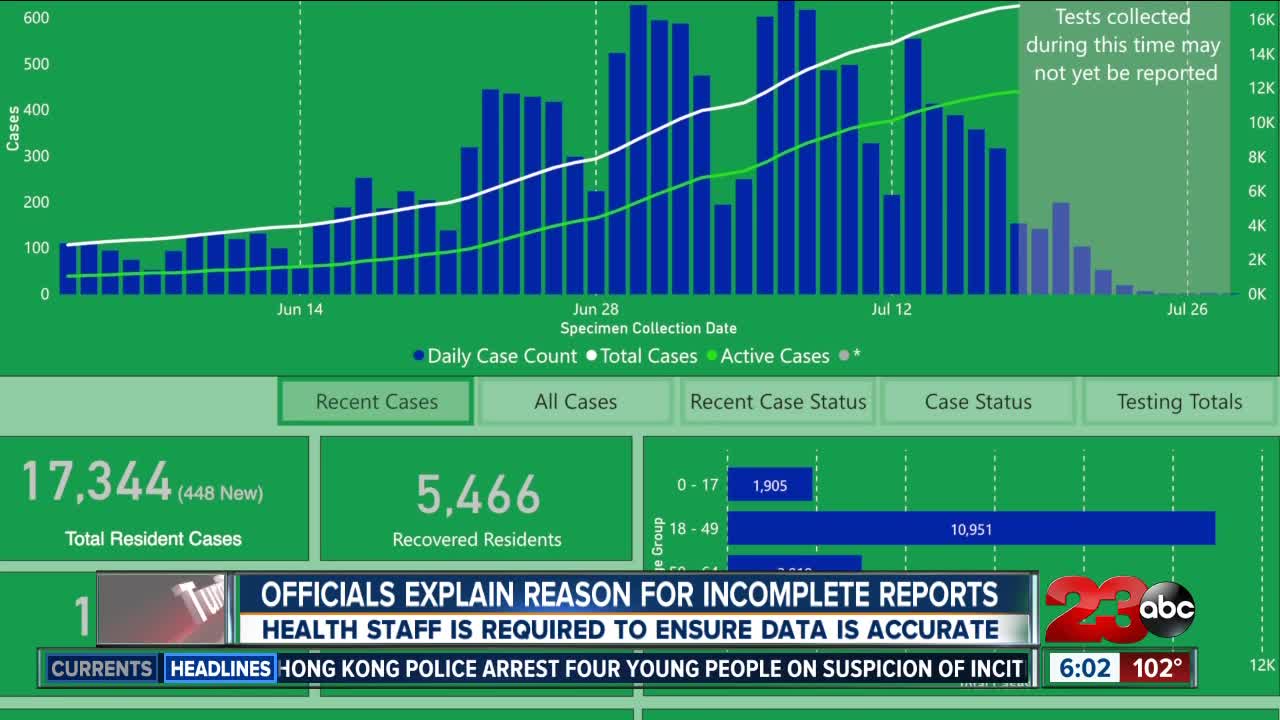 Public Health explains where incomplete test results are coming from.

BAKERSFIELD, Calif. — Before Wednesday it was still somewhat unclear where the incomplete COVID-19 test results were coming from, but Wednesday 23ABC News spoke to the Director of Public Health, Matt Constantine directly to get further clarification on the issue impacting the county.

23ABC News sat down with Constantine and asked him if incomplete lab reports were coming from labs, testing facilities or both.

"It can be both it just depends …it's either the provider or the lab," Constantine said.

However, he said many of these reports that are getting submitted are coming back incomplete and therefore his staff at Kern County Public Health must then go back and make sure everything is obtained accurately.

"They are either missing full names or phone numbers, sometimes they are missing date of births which is the key kind of unique factor that we use. Ethnicity is often times missed too."

He said this double verifying process takes time and slows down their ability to update the dashboard with our daily new positive cases. However he also said the staff at Kern County Public Health are the one's with the job to make sure the person who is tested positive has not already been reported on and published to the county dashboard more than once. He said the hope is that if someone gets tested twice or is reported to Kern County Public Health twice via fax or electronically from the lab or testing site, that staff can spot it and make sure that person doesn't make it to the dashboard and skew our county data.

"So our hope is that we never publish duplicated data so we have to talk to the epidemiologist I'm not aware of any time that occurs."

However, what is also interesting is that he said incomplete reporting has been taking place for a while now. However, he said problems like this started taking longer to solve once they saw an increase in testing at The Quest and West Pac testing sites, when labs got delayed and were mandated by the state to hold samples from healthy and asymptomatic individuals.

"All of sudden in batches we saw the labs start reporting all of this data that caused us to say... wait a minute the staffing plan is not accurate we had to redesign it."

"But it is what is being reported to us on that day...so the coroner sends us stuff, the lab sends us stuff and it does ebb and flow significantly. The state actually has a role in this, in the state data base they have to do certain things to move cases along not only us so were dependent on the state."

Constantine said we are all inner linked in this and it does impact the numbers. However, he also said that because the daily number of test results coming back from these labs and testing sites is so unpredictable on any given day he can't even determine how many staff members are needed on a daily basis to meet the type of demand they may see on that day.

He said everyone at Kern County Public Health is now working around the clock on this issue.