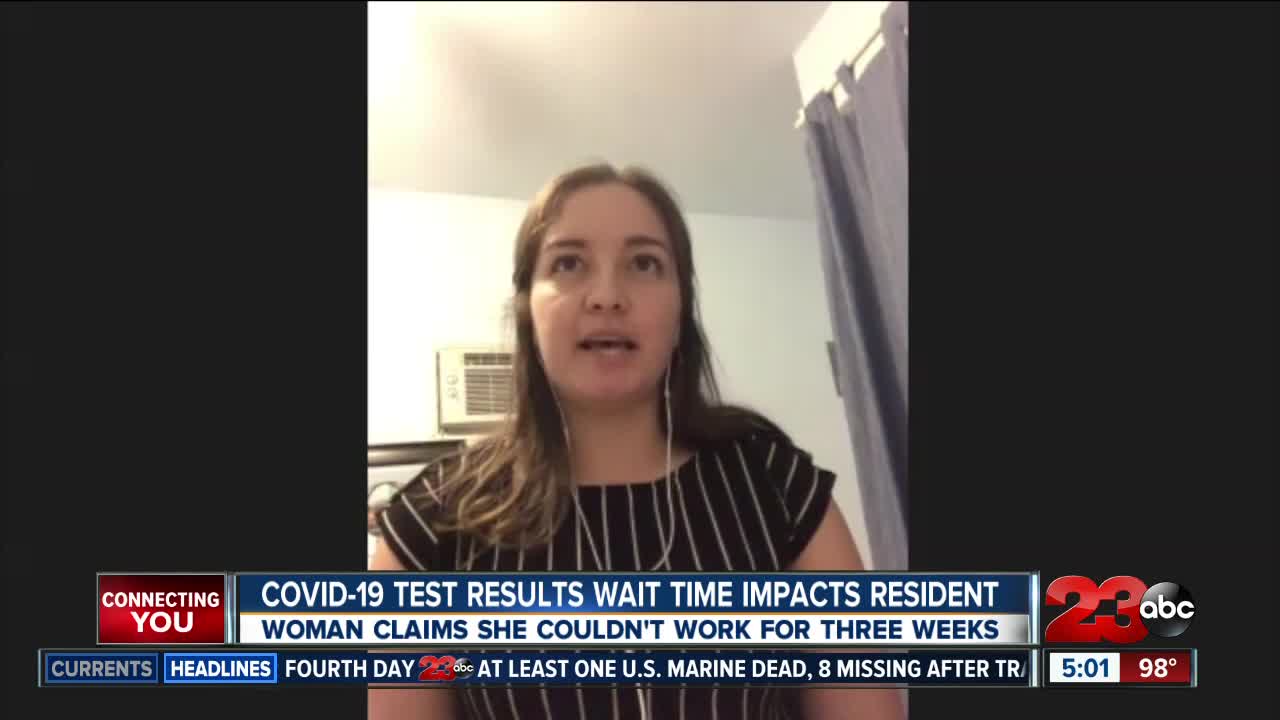 BAKERSFIELD, Calif. — A local woman told 23ABC News on Friday that she was put out of work for more than three weeks due to the long wait times for her COVID-19 test results to come back from the Quest Diagnostic Center.

Victoria Guerrero said she works two jobs at two separate fast food restaurants here in Bakersfield and she said once there was an outbreak at one restaurant, she couldn’t work at either one of her restaurant jobs. She said even though she wasn't showing symptoms her employers would not let her come back until until she could show proof that she tested negative for COVID-19.

“At one of the jobs that I work at they told us that someone at our job had COVID-19 and that we had to quarantine for two weeks and that they would contact us back when we could all come back. I work at a second job and the second job told me well in order to come back you need to go get tested,”Guerrero said.

However, she said the long wait time for her negative COVID-19 test result impacted her financially.

Documents show that Quest Diagnostic Center collected specimen information from Guerrero on July 14 and that her results were reported back to her Friday July 31 at noon.

Guerrero said she was initially told it would take three to five business days. However, on day five Guerrero said she called and was told there was nothing they could do other than update her test to a supervisor level.

By day seven she tried to email the provider that she was told to reach out to.

“And once you contact the email you get no response.”

She said she was eventually was given the number to contact a Quest Diagnostic Center service representative, where she thought she was going to finally talk to someone and get her results.

23ABC News also reached out to the Quest Diagnostic Center public information officer via email and phone and did not hear back.

However, documents also show Guerrero waited 17 days, unsure when she was going to get these results back and in turn she said she was losing money everyday.

She said during this time it has been harder to pay bills. She said she is luckily to be single with no kids but for someone with a family who is of a lower socioeconomic status this may be a bigger financial hurdle that they may not be expecting.

“For those people that don’t have that income and that need that extra income it’s going to affect them a lot and for them it’s probably going to be more than one thousand dollars to miss three weeks of work.”

Now Guerrero said she was considering filling a complaint but she couldn’t get a hold of anyone on the phone or over email. She said she hopes that by speaking out about her experience that the Quest Diagnostic Center can team up with other labs and or find additional ways to increase staffing and support, so that other Kern County residents are not impacted financially.