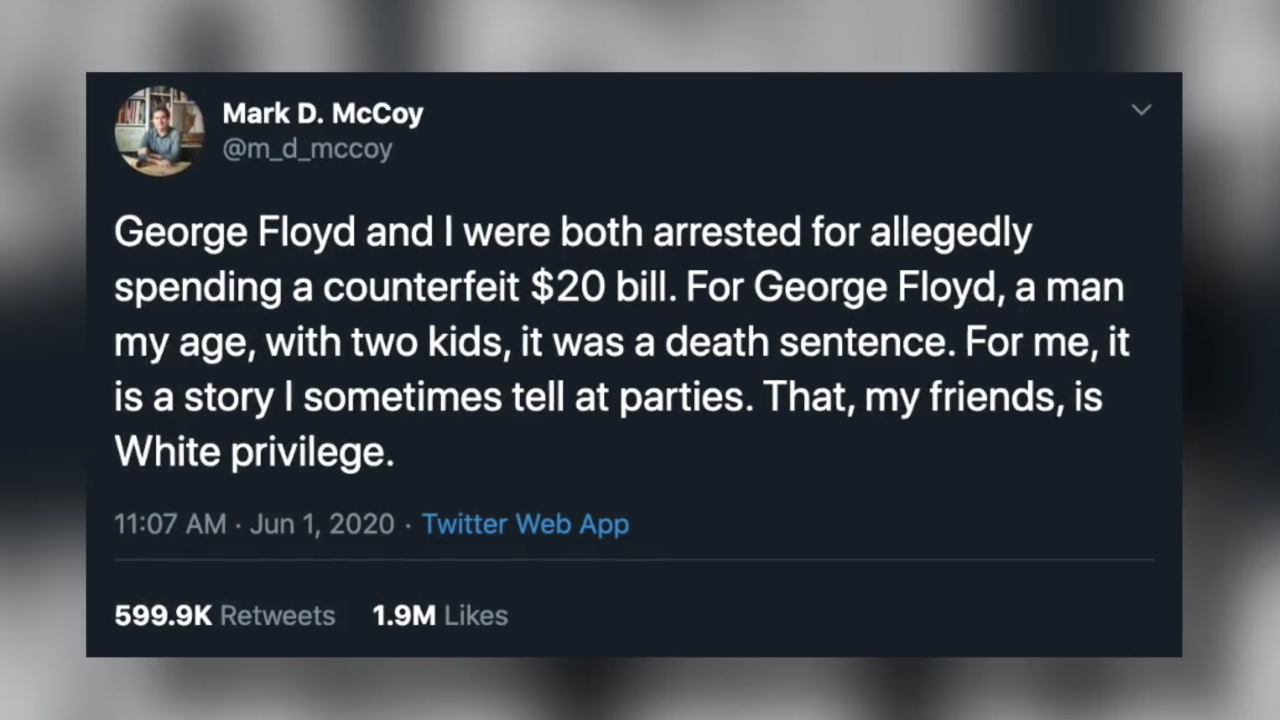 Many have been having conversations about white privilege following the death of George Floyd. One professor's tweet about his experience, comparing what happened to him to the Floyd incident, has been getting a lot of attention.

Mark McCoy says he and Floyd were both arrested for allegedly spending a counterfeit $20 bill. For Floyd, a man his age with two kids, it was a death sentence. For him, it’s a story he sometimes tells at parities.

McCoy tells us his arrest happened when he was 18 but having his 12-year-old daughter bring up Floyd’s similar arrest now drove him to post about his experience. His tweet is now resonating with tens of thousands of others.

George Floyd and I were both arrested for allegedly spending a counterfeit $20 bill. For George Floyd, a man my age, with two kids, it was a death sentence. For me, it is a story I sometimes tell at parties. That, my friends, is White privilege.

“There's a bit of people seeing in that their own white privilege and never having found a way to kind of express it in the same way that I’m well aware of it and have been aware of it since it happened, but I haven't had a place to talk about it. I guess, in this kind of format.”

McCoy says one of the things he hopes came across in his tweet was his desire to humanize George Floyd.

Both McCoy and Tim Wise, an anti-racism educator and author of a number of books on racism and white privilege, say acknowledging white privilege is a first step, but that's not where it stops.

“We've got to learn to listen to people of color and black folks in particular and believe them when they talk about their experiences, whether that's with cops or employers,” said Wise.

Wise says we must raise these issues regularly to create equality, not just when there's a crisis.

He adds that it's also important to let our families, friends and colleagues know where we stand in this moment and challenge them on where they stand.

He also says we need to recognize the movement has been growing for a long time and it will still be a long fight ahead.