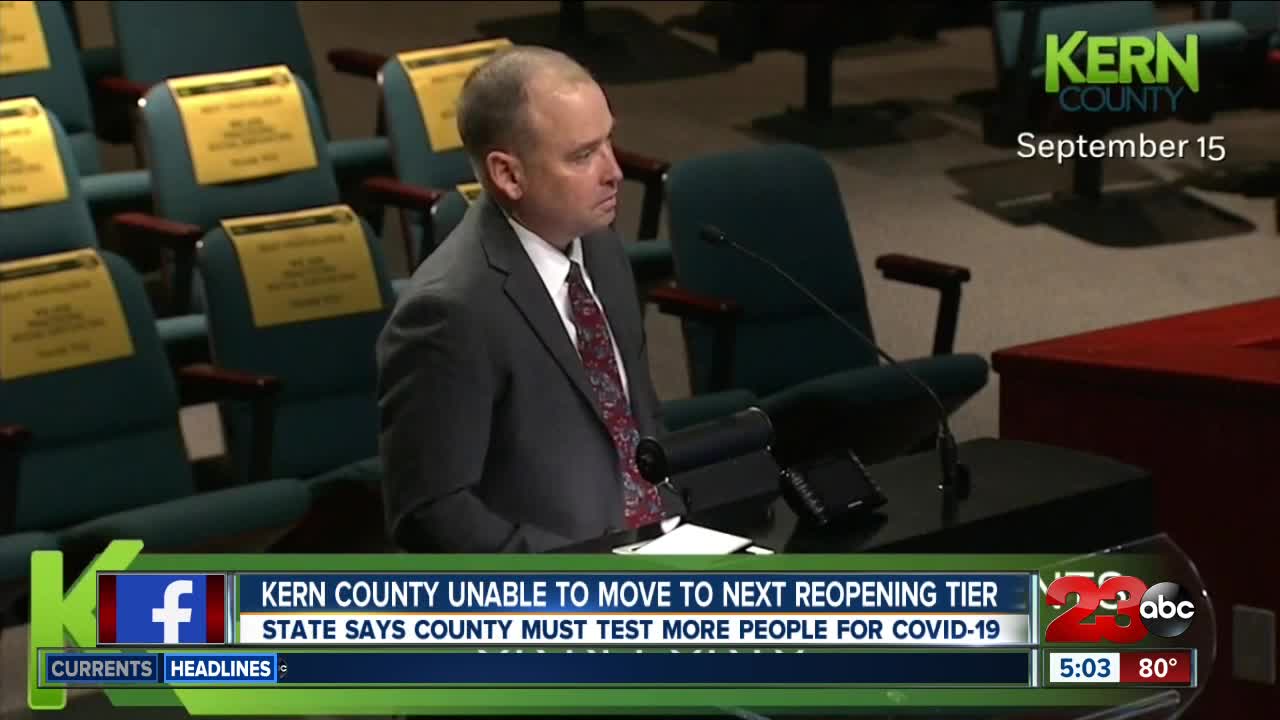 County officials continue to stress their frustration with the state's new COVID-19 testing metrics. They say Governor Gavin Newsom's new rules added to the state's tier-system are holding Kern County back from moving into the next step of reopening. According to 23ABC's Bayan Wang county officials don't think the new rules make sense and ultimately they think it's unfair.

Tuesday's Kern County Board of supervisor meeting would have typically had more of a celebration feel to it as the county's case rate and positivity rate has gone down. But that wasn't the case at all. The supervisors are again voicing their frustrations over the state's new rules to reopen business across California.

"It is abjectly not fair that we continue to meet every challenge that they've put before us and they continue to put more challenges in front of us," said Mike Maggard, the 3rd District Supervisor for Kern County.

Kern County Public Health Director Matt Constantine started off the board meeting by announcing that the county now meets state standards for the COVID-19 case rate and positivity rate. This would have allowed the county to move into the next tier of reopening if current rates are maintained for 14 days. But Constantine said the state has thrown them a wrench.

"They are adjusting our case rate because our testing - the amount of testing we're doing in the county - is low."

According to Constantine, the state adjusted the county's case rate from 6.7 per 100,000 residents to 7.5 putting the county over the state metric.

The county currently averages 150 tests per 100,000 residents a day. The state average is 216. That means Kern County would have to test 607 more people a day in order for the state to step back.

When asked by the supervisors if the state was capable of meeting the state's testing demands, Constantine replied: "It will be a significant challenge for us to meet it. I think it will be difficult to meet it."

In a statement released to 23ABC the California Department of Public Health said they've implemented the new rule because "ensuring adequate testing volume remains critical to case identification and interruption of disease transmission, particularly in communities with high test positivity."

It's a rule that that baffles Mike Earhart, the owner of Wiki's Wine Dive and Grill. His restaurant would be able to partially reopen inside if the county makes it into the next tier of reopening.

"It's really frustrating. We've been going on for 5-6 months now and we've been open and closed and open and it's patio only. The count in the community has dropped down but at the same time if you're not sick why are you going to get tested."

"The CDC actually came out and said, 'do not go get tested unless you feel like you have symptoms' and I feel like people have actually followed that directive here. The state is giving us the exact opposite message from what the Center for Disease Control is giving us."

For now, the county is going to try to figure out how do you get more people to go and get tested, especially if there are mixed messages from the CDC saying don't get tested unless you have symptoms.