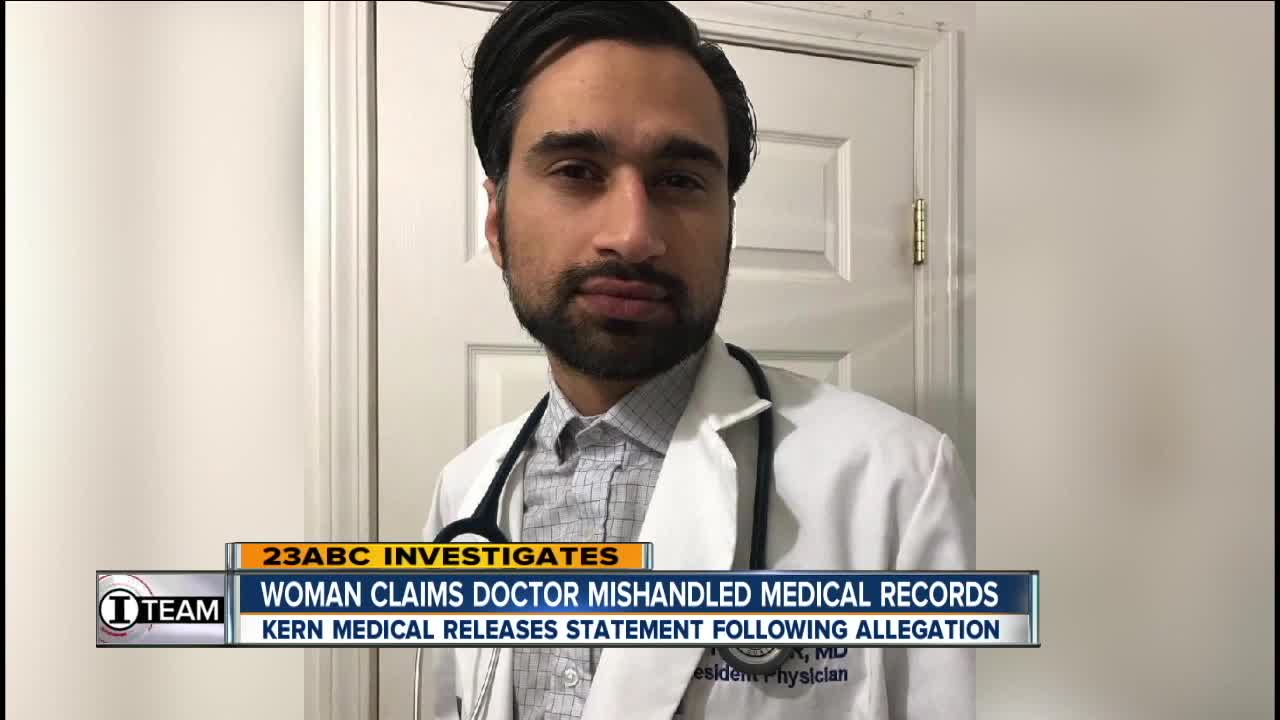 Thousands of confidential patient records made it into 23ABC Newsroom Friday. Haylee Jones, stopped by with a box full of patient records, detailing highly privileged personal information belonging to thousands of patients in Kern County along with prescriptions and more.

BAKERSFIELD, Calif. — Thousands of confidential patient records made it into 23ABC Newsroom Friday. Haylee Jones, stopped by with a box full of patient records, detailing highly privileged personal information belonging to thousands of patients in Kern County along with prescriptions and more.

Kern Medical confirmed with us that Rishi Telwar was in the residency training program at Kern Medical, but that he was not permitted to take home patient records.

Jones said while she was dating her former roommate and ex boyfriend, Rishi Telwar, she would frequently find patient information around the home they were living in together while they were dating.

Jones said she thought it was very odd.

"I told him I don't think you should take this stuff home," Jones said.

According to Jones, after he left she found at least four separate boxes containing confident and privileged Kern Medical patient information.

"Patient social security numbers, phone numbers, I mean everything you would need is on these papers," Jones said.

When we called Telwar and asked him why he took patient records home, he first told us,"I believe those records were stolen."

When we asked him if he had anything else to say, he said, " I have no comment I need to investigate this."

Then he said in part that he wanted to take back his previous statement about the records being stolen.

Telwar knew it was an on-the-record conversation with us over the phone.

“KERO News contacted Kern Medical today about an individual alleging that a former resident physician who graduated from one of our medical education programs in 2017 had improperly accessed medical records, prescription pads, and engaged in relations with a patient. Kern Medical was previously unaware of these allegations. Kern Medical views such behavior as egregious and violates the organization’s policies, mission and values, and we vigorously investigate and address any such alleged behavior. Kern Medical exists to serve our patients and community, which includes serving as our county’s only safety net hospital and teaching facility. We expect our physicians, faculty, and staff to uphold the highest standards of conduct and ethics in the care of our patients.”

Jones has since filed a complaint with the California Medical Board about the medical records she found in her home.

The board told 23ABC News doctors and residents are not permitted to date their patients or just write prescriptions for people they know and want to help out without an exam.

The board also told us that physicians are expected to protect the privacy of their patients above anything and records must be stored in a manner that does not compromise a patient's privacy.

In the box, we also found an evaluation letter from Kern Medical Doctor Alan Scott addressed to Telwar saying in part that due to numerous complaints brought forth in the department, the Clinical Competency Committee found that he lacked professional behavior, did not comply with policies, and the committee was concerned with his wellness based on his behavior toward pharmacy staff and his use of over the counter medications in the pharmacy were red flags.

"What I hope to come from this is to protect other people and their privacy," Jones said.

Dr. Telwar license is also still active and he appears to be practicing medicine in Rancho Cucamonga.

Jones wants to pursue legal action against Dr. Telwar, and she is currently looking for an attorney.

Jones said she also knows Telwar harassed other women and she hopes this encourages them to come forward and or reach out to the California Medical Board anonymously.

You can find a link to file a claim here if you have been impacted.