Kern Back In Business: Lamont prepares for Job Fest 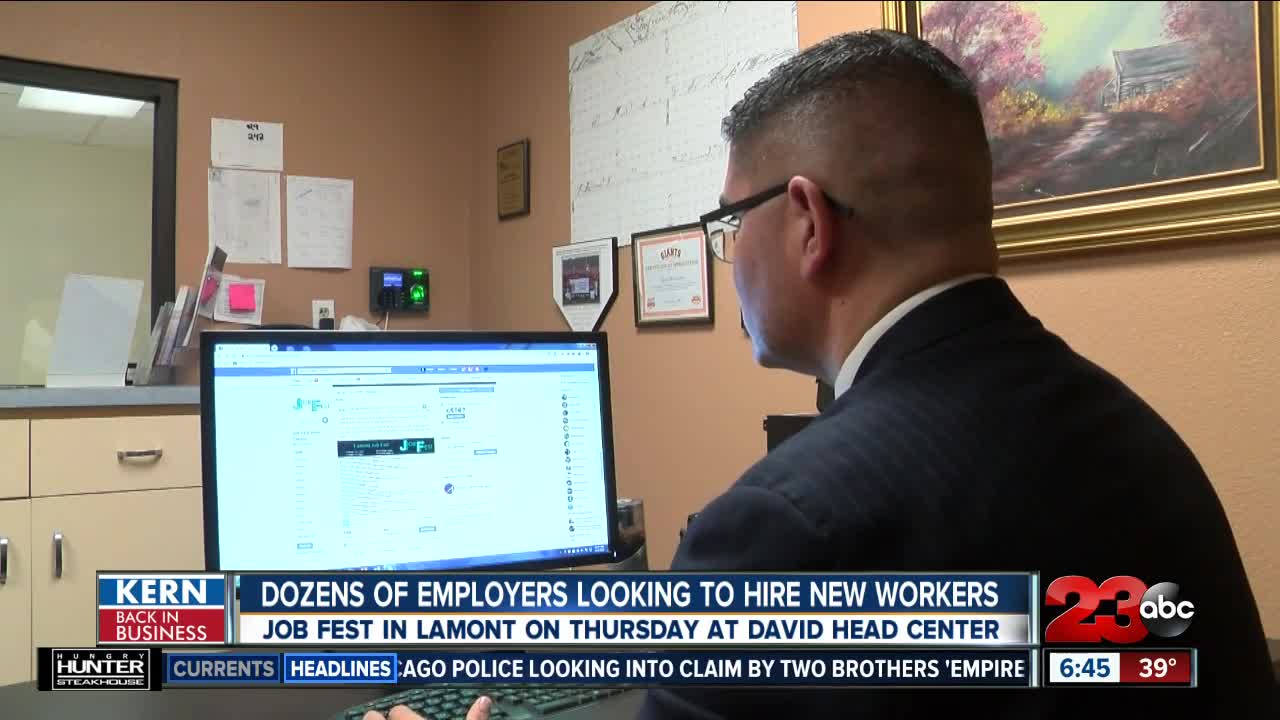 Denny's, Dollar General, Clinica Sierra Vista and K.S. Industries. They are among the three dozen employers looking to hire during the Job Fest in Lamont's David Head Center.

Frank Cabrera is a job developer for the Kern County Job Fest team. He said, "There's going to be a diversity of great employers there, not only from the local area but also from the Tejon area. So great opportunity to come and connect with many of these employers."

The Lamont Job Fest is the first job fest of the year. The greater Lamont Chamber of Commerce president, Jose Gonzalez, said, having this Job Fest now will help Lamont's unemployment because it will bring together multiple different types of industries to the same venue.

Gonzalez said, "We have plenty of opportunity now with the Job Fest that's coming that local residents can actually get a different type of a job not just only agriculture,"

Gonzalez also said Lamont has a 10% unemployment rate, which is slightly higher than Kern County's 7.6% unemployment. And a Job Fest could help his community diversify and have a brighter future.

One of the companies looking to hire new workers is K.S. Industries. They have 22 job openings ranging from roustabouts to crane operators and crew leads.

K.S.I. human resource recruiter, Kevin Mendoza said, "The reason for the opening is we've been picking up quite a bit of work we'll soon be expanding to the San Ardo area as well. And it just seems to be picking up all together."

Mendoza also said when he goes to career fairs he first impressions mean a lot to him.

"The way they present themselves can tell a recruiter a lot about the kind of employee they're going to be. From a firm handshake to start with, being able to communicate clearly with the recruiter and to being able to explain the what experience they have is what we'll be looking for a lot," said Mendoza.

Cabrera said he has other tips about how to prepare for an upcoming career fair. He said organizing your resume and preparation are critical to putting your best foot forward.

"You want to target your top five employers. Go to their website, research them and basically look at the job description on the website, look at what is the qualifications and tailor that resume to that target employers."

When Cabrera was asked, "Other than the dress for success, what else can people wear with them to really stand out when they're walking into a Job Fest?" Cabrera responded with, "So they want to wear confidence, they want to wear positivity, and they really want to wear their personality, because the unique thing about a Job Fest is you're basically taking yourself an opportunity from being in an online world somewhere of online application process world and you're getting in front of that employer and showing that employer who they are. And that employer sometimes says 'I like that person. I want them in my organization.' And that's where you can make that happen at a Job Fest."

For the community of Lamont, Gonzalez said, bringing the employers to the people will help grow the family-centered community.