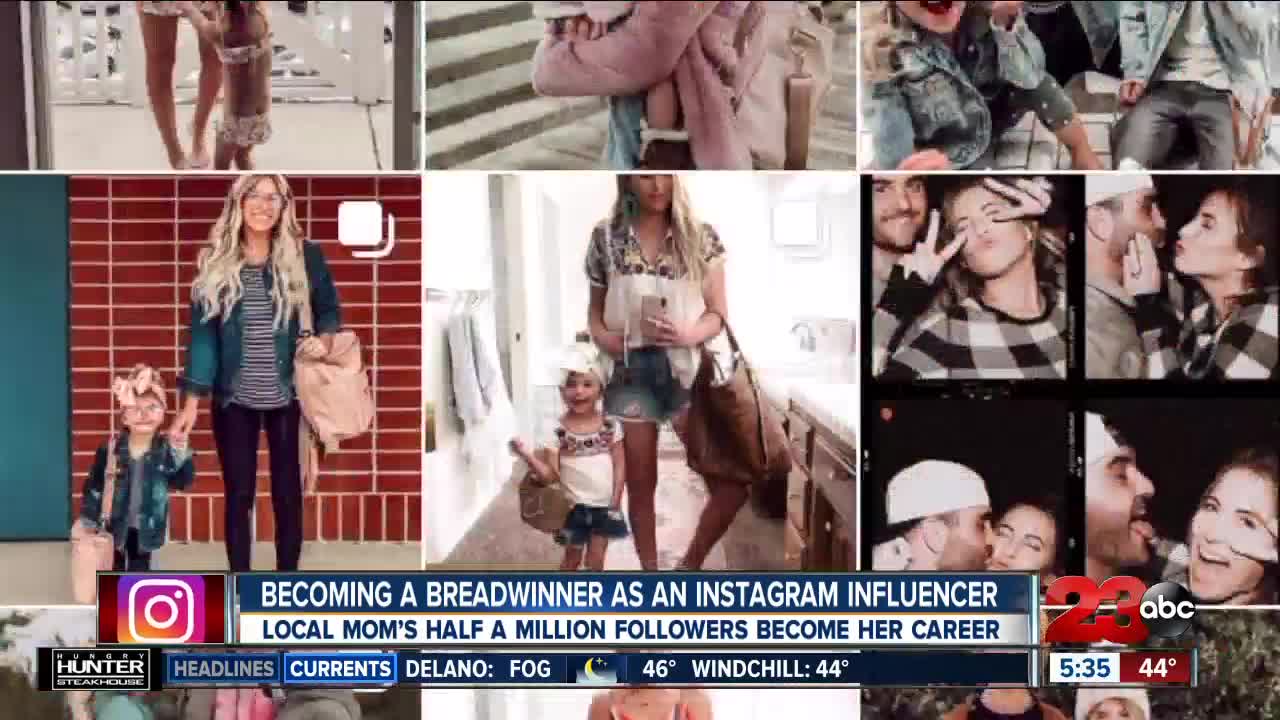 Scroll through Krista Horton's Instagram and you will see the types of pictures you see on most mom's accounts: her kids Kolly and Boston, the family dog, her husband Bryce, and their family vacations. But unlike most moms, with over half a million followers, Krista has made a career out of capturing her stay-at-home mom life in Bakersfield.

“I would put on little matching outfits for me and Boston and Bryce would get home and I would be like, ‘Babe you want to take our picture?’" she said. "And it became our daily thing."

Soon, her 'mommy and me' posts with baby Boston started getting attention.

“I would say probably like within six months of it, that is when shops started to reach out to me to be like, ‘Hey can we send you some stuff,' she said. "To get free clothes or whatever was such a huge deal and I thought it was just the coolest thing ever.”

It wasn't long before free clothes turned into more. A fellow blogger filled her in on the fact that she could be charging money on top of receiving free products.

That's when a business began to blossom. Her following grew too. Krista says she began growing a reputation on Instagram for her matching outfits and mom life realness.

She says the rate started at $25 for one of her posts.

As her following grew into the hundreds of thousands, that price went up.

“So say you have 10,000 followers, you could make $100 per post,” said Krista. “The amount of money that companies will pay influencers is mind blowing and I think that a lot of people don’t realize that.”

With Krista's over 500,000 followers reaching all over the world, that's a potential of thousands of dollars for every deal with a brand.

Posting about companies and products she's passionate about, but sometimes turning down the ones she can't stand behind.

But she says what she is most proud of sharing is her own story. Earlier this year, Krista brought followers along on her journey as she looked to make her sister's dream of motherhood come true, by being her surrogate.

“Any little bit that I can share of the experience she went through could help somebody else. That means more than anything to me. More than any product I have ever shared," said Krista. "I just think it’s the coolest thing that people can connect on that level.”

And when Krista suffered a miscarriage months later, she says opening up to her followers seemed to be as meaningful to them as it was to her.

“Such a personal difficult thing that you go through but then when you hear everyone else’s stories you’re like I’m not alone. This happens so often," said Krista. "Then you hear other stories and you realize I am so thankful for what I do have because there are so many people out there going through much harder times.”

But she says it's a balancing act between opening up, and not sharing too much.“We try to be careful about certain things and I am always extra careful about my kids. But we are putting our lives out there, and I feel like anytime that you do that there is a little bit of a worry.”

And with such a big following, from time to time, she has to deal with critics.

“You got to defend yourself. There’s always going to be somebody out there that doesn’t agree with you," said Krista.

“But I mean for every 500,000 messages there’s probably two negative ones. So you can’t focus on the negatives.”

Although keeping up with such a big following can mean a lot of screen time for Krista, she says being an influencer has actually given her more opportunities for quality time.

"There are days where I am laying in my bed at the end of the night and I’m like why was I on my phone so much today," said Krista. "But at the same time, if I wasn’t, I would be gone working eight hours that day and I wouldn’t get to see them."

This job allowing her to work from home, travel with family and soon her husband Bryce will be joining her.

"Actually as of January 1st, Bryce is going to be home with me working with me," said Krista.

Even with so many big names in the Instagram industry flocking to big cities, you can expect to see the Horton family staying true to their Bakersfield roots.