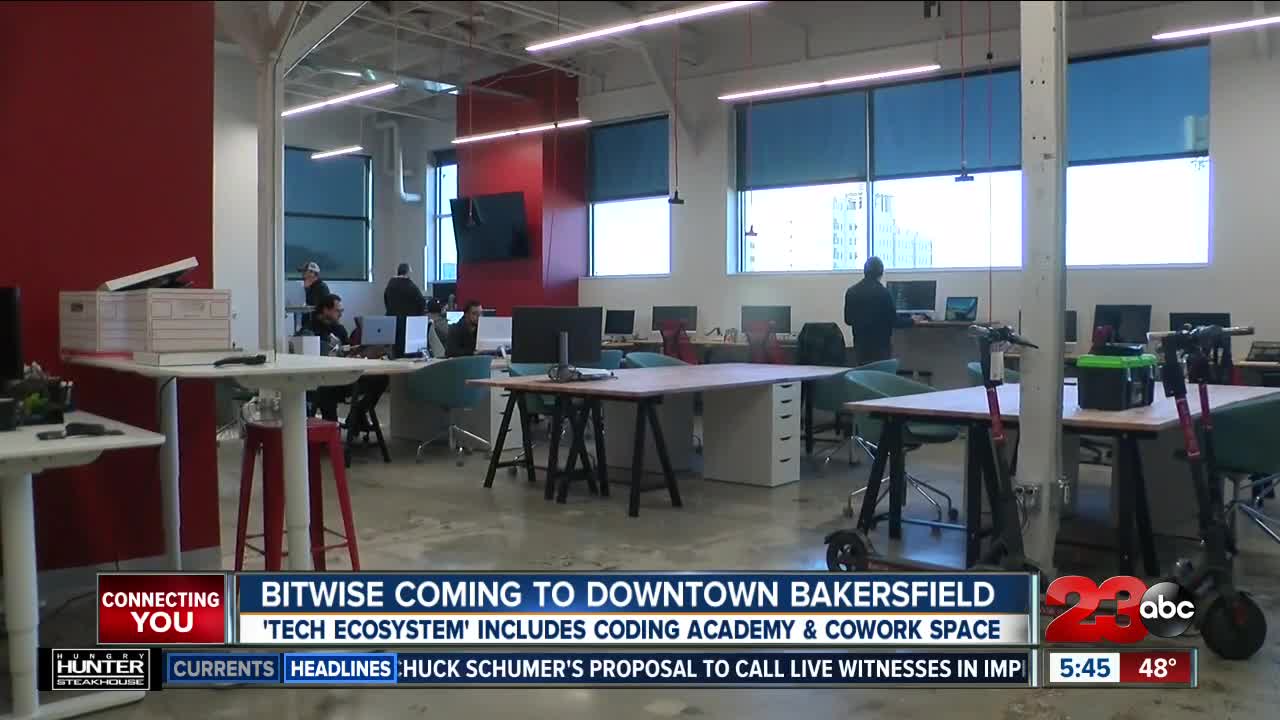 BAKERSFIELD, Calif. — It's a place to develop, learn, cowork and it's coming to downtown Bakersfield - - Bitwise.

“There are already so many people here doing amazing things in Bakersfield. They are very active and they are so ready to put this real big emphasis on change in their city. We just want to come alongside them and really help them do that,” said Channelle Charest, Executive Director of Growth at Bitwise.

If you have driven through downtown Fresno, you have likely noticed the several bright buildings that are hard to miss.

Charest says Bitwise Industries will be bringing that boldness south to Bakersfield.

It's an expansion that she says felt natural because of the proximity and similarity to Fresno, what Bitwise calls underdog cities.

So what exactly will happen inside this one-of-a-kind tech hub?

“Our whole goal is to make as many spaces as possible to allow that talent to rise to the top. So it already exists," she said. "That’s the cool thing is it already is in Bakersfield and we are just making space for it.”

For $10 per day or $39 per month, you can have 24/7 access to the open work area complete with desks, standing desks, and conference rooms.

“You have all of these amazing people that are just kind of spread out and don't even know that the other exists. They don’t even know that there are people like them doing things that they are doing or working on the same projects," said Charest. "It would be beneficial to put them in the same place because then you really see innovation and networking and cross collaboration.”

Charest says there will be scholarship and payment plan options for Geekwise as well.

“Bringing actual technical classes to Bakersfield that are available to anyone, any background. There is no barrier to entry,” she said.

Local businessman John-Paul Lake says he is excited about the new addition to downtown Bakersfield. He invested in Bitwise's expansion after visiting the Fresno campuses.

Lake says he thinks the Geekwise Academy brings big potential for the quality of the local workforce.

“Often times we think of high-tech jobs as being very hard to reach, almost unattainable thing for a city or a community to aspire to," said Charest. "But the fact is that almost every business nowadays has a tech component. It’s really just a core job skill. With a little bit of coding background that employee now becomes tremendously valuable."

Shift3 has helped clients like Lake bring projects to life. In this case, a website called Beyond Measure . It's a classroom funding tool for private schools.

“What Shift3 and Bitwise brought is that technical understanding of how to execute that vision," said Lake. "How to deal with security on the site and credit card processing and building a database that is scalable."

Charest says it's this type of innovation, already in Bakersfield, that Bitwise hopes to elevate.

“It’s a matter of bringing all of those technologists together, or those who have an inclination towards technology, putting them in one place and giving them an elevated platform to speak to the world."