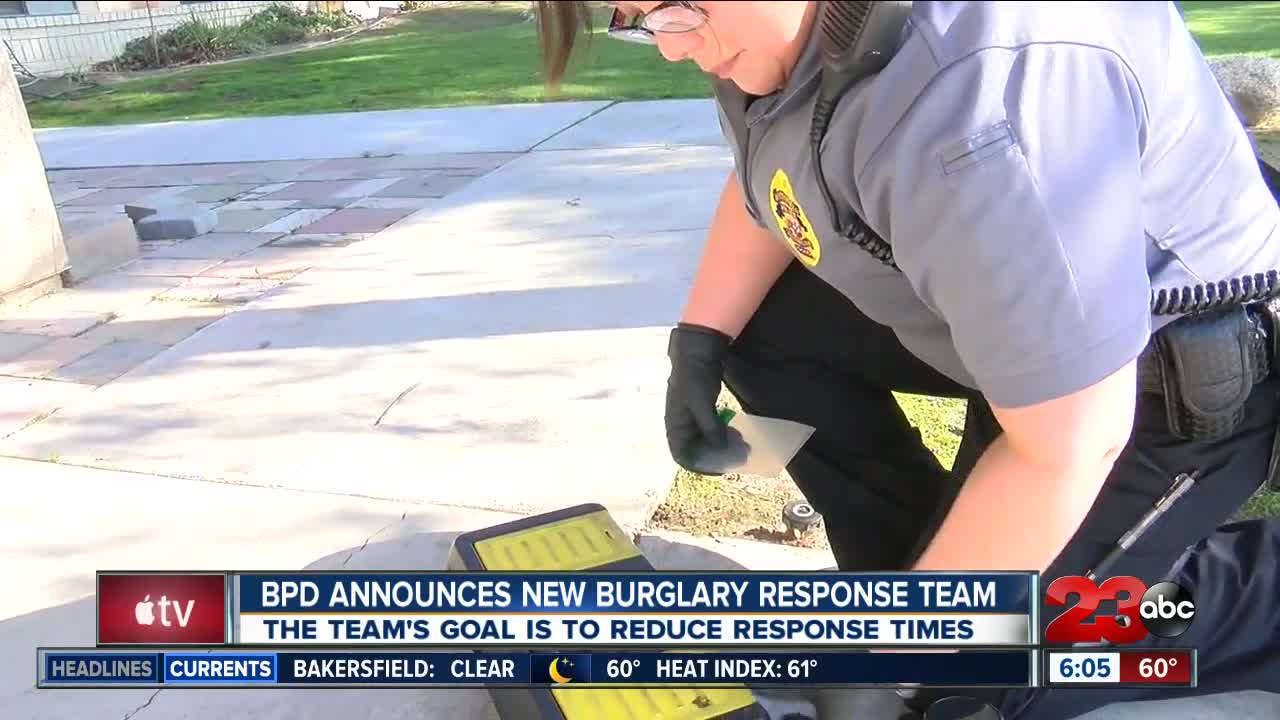 BAKERSFIELD,Calif. — The Bakersfield Police Department is introducing a new team to reduce their response time to non-emergency calls, the Burglary Response Team.

The department says they have not been able to respond as quickly for the past three years due to the loss of manpower.

23ABC was able to get an exclusive behind the scenes look on a typical day for the team.

Brianna and Jeff Garcia, say their garage was broken into on Wednesday morning, in Southwest.

The couple says they immediately called BPD. Within the hour BPD Burglary Response Team was there.

"They took all of our sporting clay equipment," Brianna Garcia said. "[They took] our shooting vest, our chokes, cleaning supply, our ears and all the things we collected over years that are ours."

The couple says they found a man in their garage and another person sitting out front in a white Lexus.

Homeowner Jeff Garcia says he approached the man, who said it was a misunderstanding and let them go.

Later the Garcia's realized, the duo stole $2,000 worth of clay shooting items.

The team members are not sworn police officers, but take photos, dust for fingerprints, and take initial reports.

Officials say the team was made possible due to Measure N funds and have been in the field since Jan. 9.

"A call that has just occurred, we are going to enter that as a priority call for service," said Sgt. Keli Paulk, for the Bakersfield Police Department.

"The calls that we are talking about, that the Burglary Response Unit will address, are the cold calls. [It is] the call that has been holding and there is no suspect information at this time and no chance that anyone is still inside."

Paulk says the department felt a need to create the team. Also, she adds it has been three years since the department has provided this service, due to a lack of funds.

Before, non-emergency calls were answered through their Telephonic Reporting System, where all information is taken over the phone.

The Telephonic Reporting System is the service that responded to a story 23ABC brought you earlier this month.

It is the case where, a local restaurant Barrington's Jamaican Kitchen, was burglarized and police were unable to process the crime scene, for five days due to lack of resources.

Police tell 23ABC that say they learned a lot from that incident.

"Quite frankly we learned a lot from that call you are referring to," Paulk said. "We are restructuring how the calls are being answered. So calls have occurred where things have fallen through the cracks and people weren't aware of what the process was."

The Garcia's say they are grateful for the quick response from BPD's new team.

"I really didn't expect anyone to call me back and within less than five minutes I got a callback from the officer, she was very professional and seemed like she genuinely cared," Brianna Garcia said.