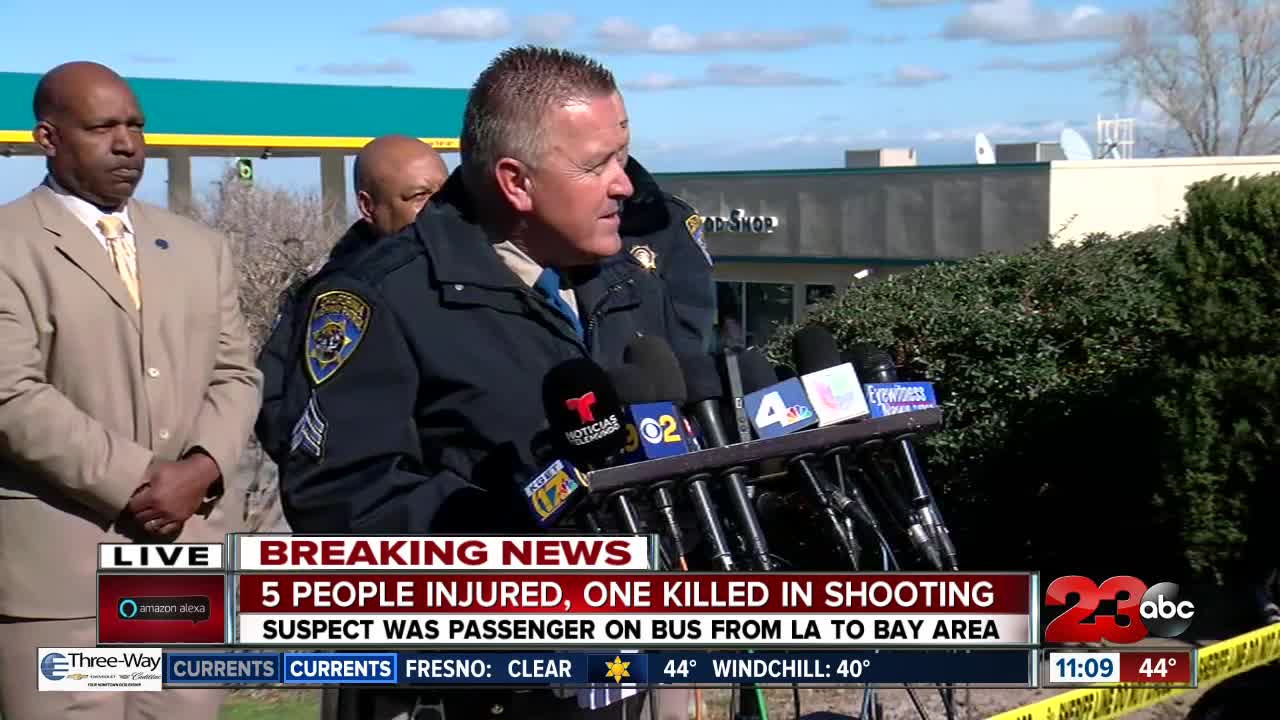 The California Highway Patrol provides an update on a fatal shooting that took place on a Greyhound bus bound for San Francisco. 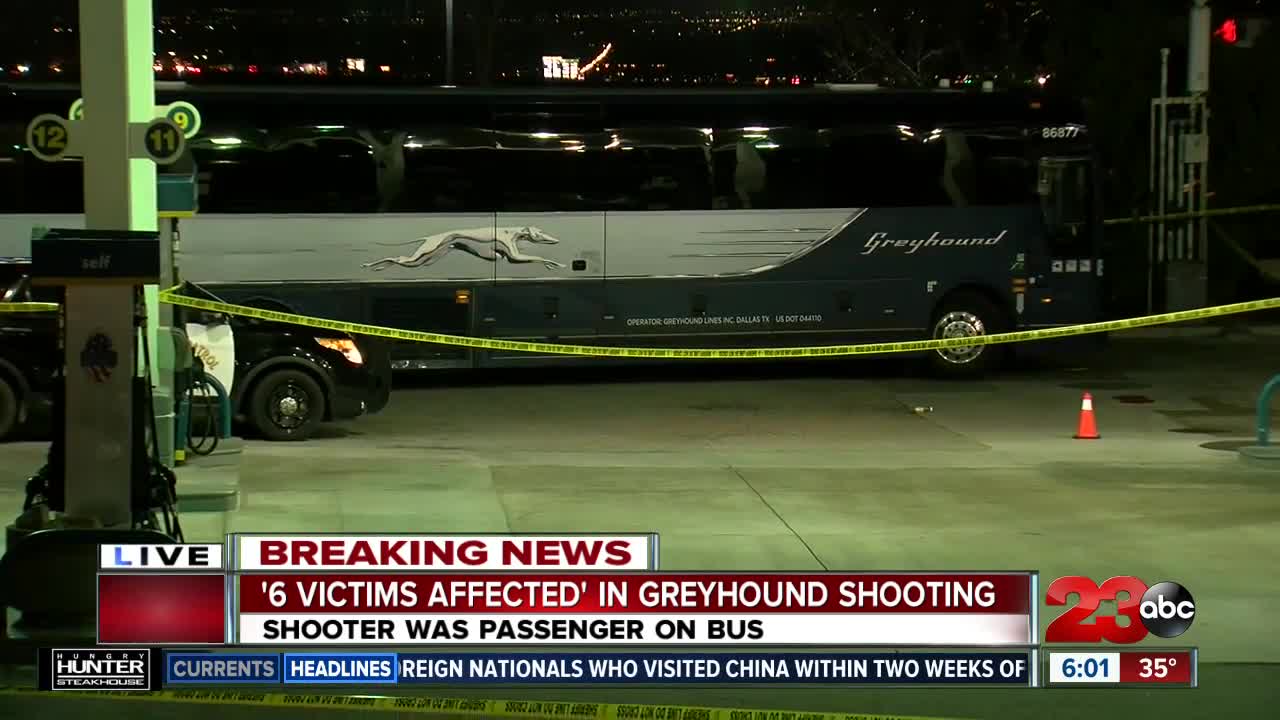 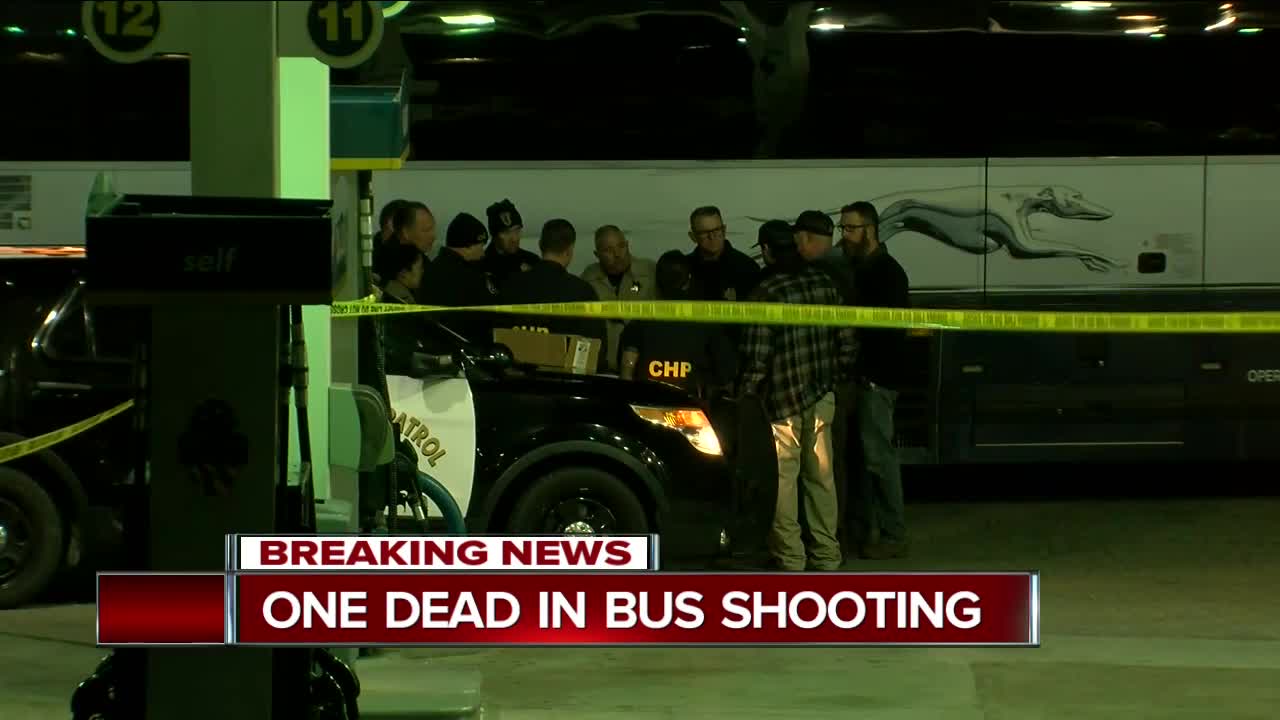 A woman from South America was killed in a shooting on a Greyhound bus early Monday morning, according to the California Highway Patrol.

In a press conference, Sgt. Brian Pennings of the CHP revealed that a 51-year-old woman who held a Columbian passport was shot and killed on a Greyhound bus carrying 42 passengers that was headed to San Francisco from Los Angeles.

The sequence of events is still being investigated, but at 1:27 a.m., the CHP received 9-1-1 calls from passengers that there was a man with a gun on the bus and that he had fired and "injured" several passengers. The driver of the bus was able to pull the vehicle to the shoulder of northbound I-5 near the Fort Tejon exit.

In actions Pennings described as "heroic," the passengers and bus driver were able to get the male shooter off the bus without his weapon. At that point, the driver got the bus back onto the highway and pulled off at the nearest exit as passengers rendered aid to the victims.

The 51-year-old woman was declared dead at the scene.

Two children, ages 6 and 8, were also on the bus at the time of the shooting but were not injured.

CHP officers located the suspect and took him into custody without incident. The motive for the shooting is unknown at this time, but a passenger on the bus told the Associated Press the suspect was talking to himself prior to the shooting.

Passenger Mark Grabban, 29, told The Associated Press that the gunman had been sitting with his leg sticking out into the aisle, muttering to himself incoherently.

“He was just saying weird stuff like 'you don’t know me like that,' ‘wait til we get to the station,' 'get away from the dude in the striped shirt,’” Grabban said in a series of Instagram messages.

Suddenly, the man started cursing and shooting, Grabban said. Grabban hid beneath the seat in front of him. He said the gunman seemed to fire eight or nine shots that “seemed to go on forever.” He added: “I was waiting for one to hit me."

“I thought I was shot because I felt a rush of heat on the back of my head as I went down,” he said. “But I guess I just smashed my head on the seat as I went down to the floor.”

Then, silence fell. The injured passengers began moaning, and others started panicking. It was dark outside and they couldn't see what the gunman was doing after he got off the bus. Grabban said the driver of the stopped vehicle asked over the loudspeaker if anyone had been hurt and did not immediately pull away. “Everyone was screaming at him to drive off,” Grabban said.

Grabban, who was sitting near the back of the bus with his girlfriend, picked up the gun's empty magazine clip and handed it to the driver. A casing ended up on Grabban's lap, he told NBC News.

“I saw the blood on the floor of the aisle,” Grabban told the network. "I looked to the woman on the left, and she wasn’t responding, wasn’t moving or anything. She was lifeless."

Pennings said a 9 mm Century Arms semi-automatic pistol was used in the shooting and that several magazines were also found.

Authorities are continuing their investigation, along with the Kern County Sheriff's Office and the ATF. Passengers who were not injured and who have been interviewed by police are being released to friends or family or were transferred to another Greyhound bus.

Pennings thanked the manager of the Denny's Restaurant for shutting down operations in order to render aid to those involved in the incident. The Kern County District Attorney's office also provided a crisis response team.

Greyhound issued the following statement in regards to the incident:

Our thoughts and prayers go out to our customers, driver and their friends and family following today’s incident involving schedule 6848-1 traveling from Los Angeles to San Francisco. We are thankful for the heroic actions of our driver and passengers as they worked together to bring the bus to safety. We will continue to assist Kern County police in every way possible during their investigation. For the most up to date information regarding the status of the investigation, please contact the Kern County police department directly.