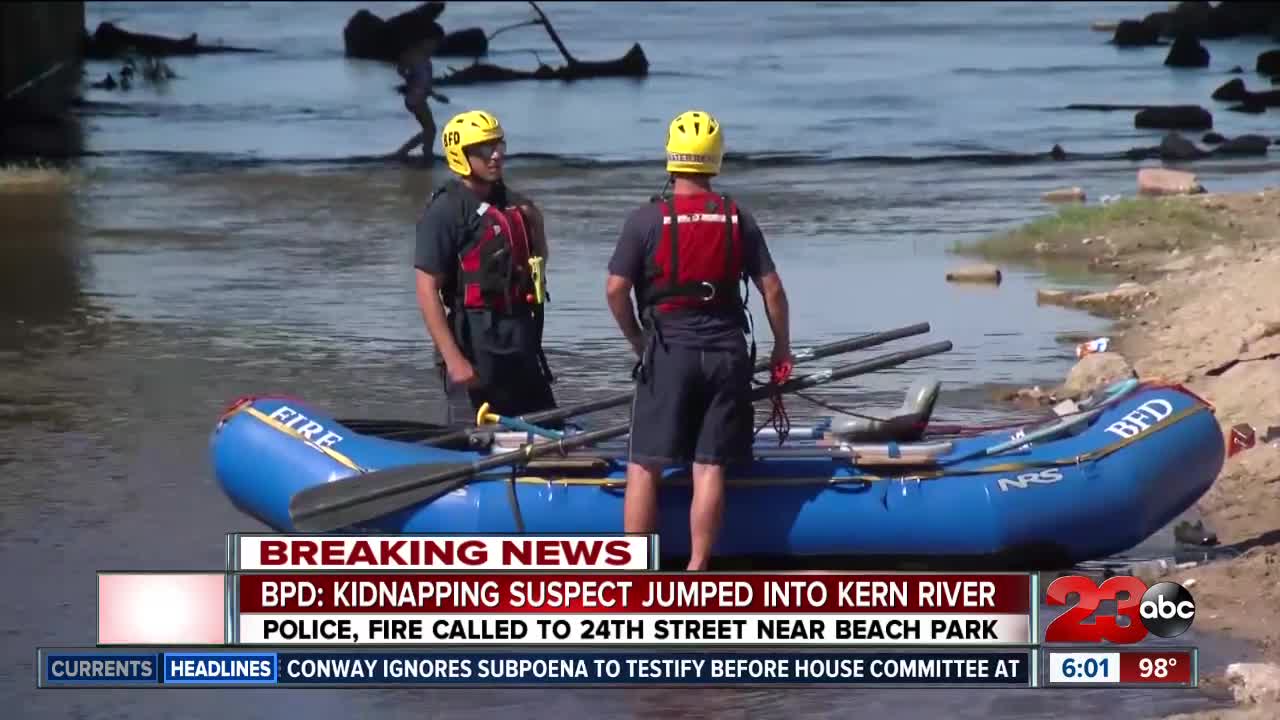 Police, and fire departments were called to 24th Street near Beach Park during standoff.

BAKERSFIELD, Calif. — UPDATE: A kidnapping suspect who tried to evade police by entering the Kern River was taken into custody following a standoff and is set to be in court on Thursday.

Bakersfield police say 42-year-old Matthew Queen was being investigated in an ongoing kidnapping case. When police contacted Queen he ran off and ended up in a part of the Kern River between Beach Park and Yokuts Park. He braced himself against a concrete pillar and due to the river's current police weren't able to go after him. He eventually surrendered and was taken into custody.

He now faces multiple charges, including kidnapping and possession of a gun by a felon. He's scheduled to be in court at 3 p.m. on Thursday afternoon.

UPDATE: After what officials say was a two-hour stand-off, a suspect is safe and in custody after he reportedly fled from Bakersfield police during an ongoing kidnapping investigation on Buck Owens Boulevard around 3:30 p.m. Monday.

According to officials, 42-year-old Matthew Queen immediately ran from cops and ended up in the Kern River near Yokuts and Beach Parks. During the stand-off cops say Queen braced himself against a concrete support pillar in the center of the river.

"Based on the river current and other hazardous conditions, officers were unable to safely pursue Queen into the water," officials explained. "De-escalation techniques were utilized and additional resources were summoned to the scene."

After negotiation efforts, Queen was eventually taken into custody after voluntarily surrendering to officers, according to BPD.

Officials say Queen has been taken into the Bakersfield Police Department where the kidnapping investigation continues.

At this time, investigators are reportedly determining what charges Queen will be arrested for.

BPD and other officials including Bakersfield Fire were on the scene to help detain Queen.

Bakersfield Police and Bakersfield Fire are on the scene at the Kern River between Yokuts and Beach Parks for a kidnapping suspect that fled from officers.

Officials are asking for the public to avoid the area and these parks while the scene is still active.