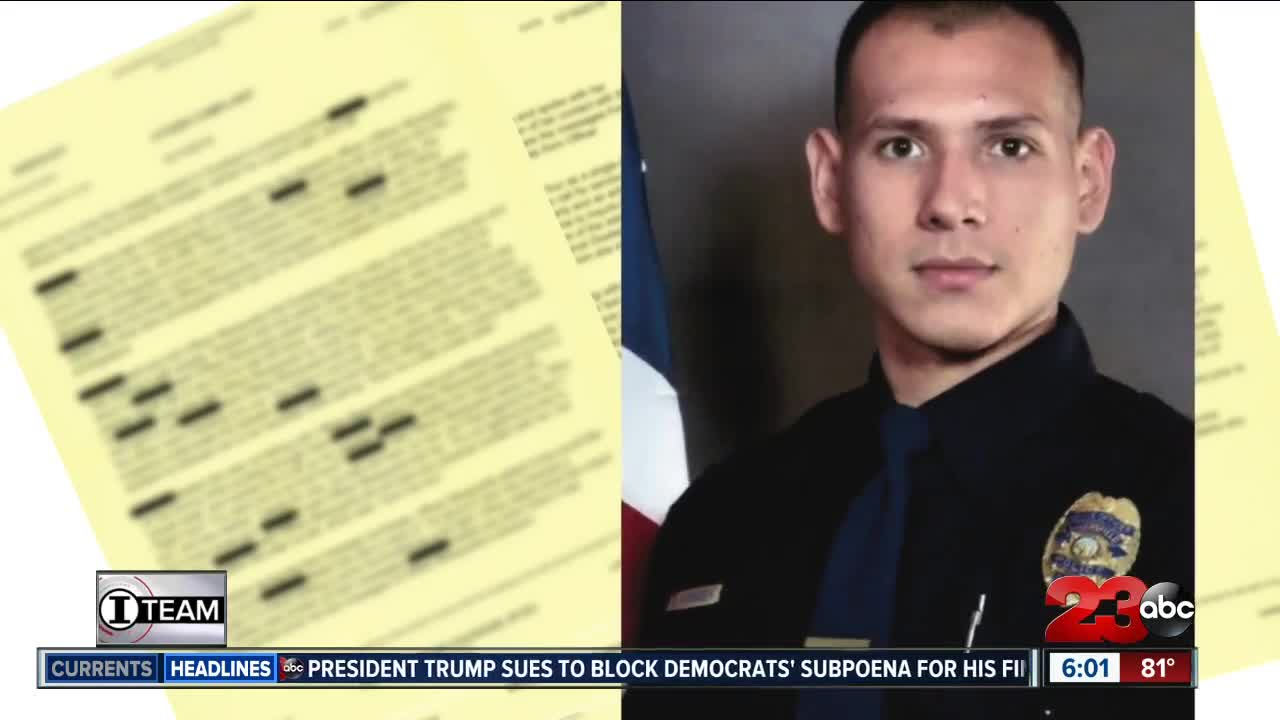 Newly released records are revealing sustained findings of sexual assault by officers in the Bakersfield Police Department. These records were made public for the first time because of a new law which requires certain peace officer records be made available for public inspection through the California Public Records Act. Specifically, the public can now request documents related to specific incidents. Those specifics include an officer firing their weapon at a person as well as an incident where use of force by an officer results in death or great bodily injury. The law requires records also be released for an incident where a sustained sexual assault by a peace officer involving a member of the public or an incident where it was determined an officer was dishonest while on duty.

BAKERSFIELD, Calif. — A woman has filed a claim, the first step to a lawsuit, against the city of Bakersfield and a former Bakersfield police officer.

Rodriguez and Associates, who confirmed they are representing the woman, said the claim was filed on April 8, 2019 and alleges the Bakersfield Police Department didn't properly train or supervise then Officer Enrique Mosqueda before he sent sexually explicit messages to a woman who called the police for help.

23ABC's I-Team uncovered records that have never been released before which reveal Enrique Mosqueda was investigated for sending inappropriate messages in October of 2018.

Records show in October of 2018, Officer Enrique Mosqueda and his beat partner responded to a 911 call and text to 911 message from a woman, we'll call her Brittney, who believed her ex-boyfriend was outside her home damaging her vehicle.

When Mosqueda and his partner got to Brittney's home, they inspected the vehicle and her property. They determined there was no crime and proceeded to leave the scene.

Mosqueda told detectives that after leaving the home, he drove to an area in Southwest Bakersfield to work on a report from an earlier call. Mosqueda said as he was driving, he saw a man who could have been the woman's ex-boyfriend. He told detectives he didn't have a description of the suspect so he text Brittney asked her to send a picture of her ex.

Mosqueda: Hello, can you send me a pic of this guy. For some reason we don't have a mug shot photo.
Brittney: Who is this?
Mosqueda: One of the BPD officers that just spoke with you sorry lol
Brittney: Ok this is gonna sounds a lil crazy lol but because of my current situation would it be possible to have a picture of you so I know that you are who you say you are??
Mosqueda: Lol I don't send pics of me that easy lol. I can just stop by your house again and look at a picture on your phone if that's ok
Brittney: Yes that's fine
Mosqueda: Ok I'll be there in a few minutes.
Brittney: Ok

Before sending it, Brittney asked Mosqueda to send a picture of himself so she knew it was an officer.

According to the text messages, Mosqueda told Brittney he didn't want to send a picture, but asked if he could stop back by her home to get the picture from her in person. Brittney agreed and Mosqueda went back to the home.

Mosqueda claimed that after arriving, Brittney began to show him nude photos of herself. However, Brittney told detectives Mosqueda was the one asking her about nude pictures and asked her to lift her shirt and give him a "sneak peek."

Shortly after, Mosqueda left the residence and went to an area to continue working on his report from earlier. He and Brittney continued to text back and forth.

The investigation into Mosqueda's misconduct began when a female officer saw a previous call for service at Brittney's home. The officer told detectives she was familiar with Brittney because she had taken a prior report for her with similar circumstances.

"I noticed that in the text of the call, it stated that the second half was the person I arrested for stalking her and violating a restraining order on October 2 [2018]," the officer said.

To ensure that the ex-boyfriend did not violate the restraining order, the two female officers went to Brittney's home to talk with her. Following their investigation, they gave her reference numbers for her report and she started to thank the officers.

"She told us that she's glad it's us that came, because we're the only ones that listen to her and you know, investigate her allegations," the female officer said. "She handed me her cell phone and said 'See, this is what happens when they send male officers out.'"

The two officers read the string of text messages sent between Officer Mosqueda and Brittney. The female officer asked Brittney who sent the messages and Brittney said it was the Hispanic officer who showed up at her home earlier that morning.

"I went and talked to Officer (redacted) across the street and told her we need to call the supervisor and tell him about this, because it was pretty apparent that she wished to tell someone about this and that she was offended to some degree," the officer told detectives.

The two female officers told the woman that they needed to contact their Sergeant and, from there, an internal affairs investigation was launched.

During his interview, Mosqueda admitted to officers that he sent the sexually explicit picture while on duty. He went on to say that he masturbated in his patrol vehicle for about a minute before taking the photograph. He said immediately after sending it, he knew he made a mistake.

"After that, I realized that what I did was wrong and deleted the picture from my phone," Mosqueda said. "That was it, I finished my report. I sent my report and I logged off and then that was it."

Detectives asked Mosqueda to read several department policies including "conduct unbecoming of an officer", "discourteous treatment", "unsatisfactory work performance" and "unwelcome solicitation of a personal or sexual relationship while on duty."

Detectives asked Mosqueda if he violated these policies and he agreed he violated "conduct unbecoming of an officer", but he did not think he violated any of the other policies.

During his interview with detectives, he called the incident a stupid mistake.

"I'd like to believe I'm a good officer and made a stupid choice," Mosqueda said. "I mean I'll use this as a learning experience and it will never happen again."

In relation to the claim filed by "Brittney", Mosqueda and the city have 45 days, from they day they were served, to respond.

These records were made public for the first time because of a new law which requires certain peace officer records be made available for public inspection through the California Public Records Act.