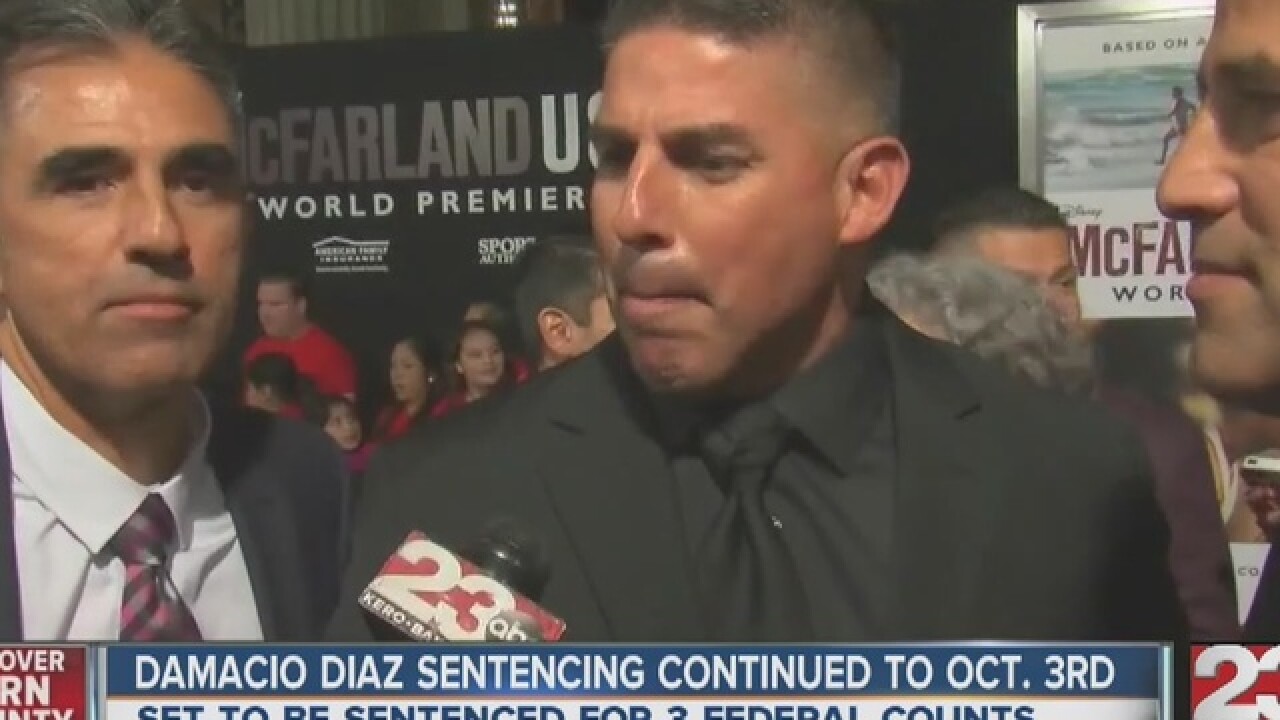 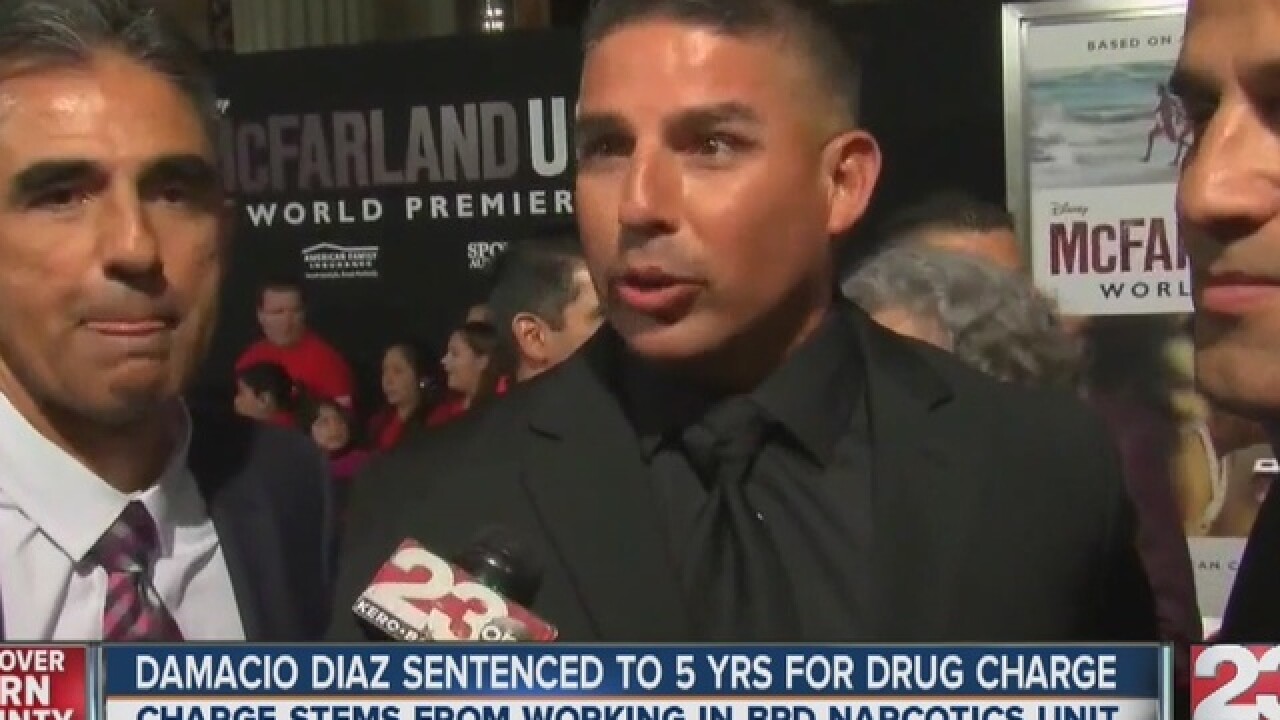 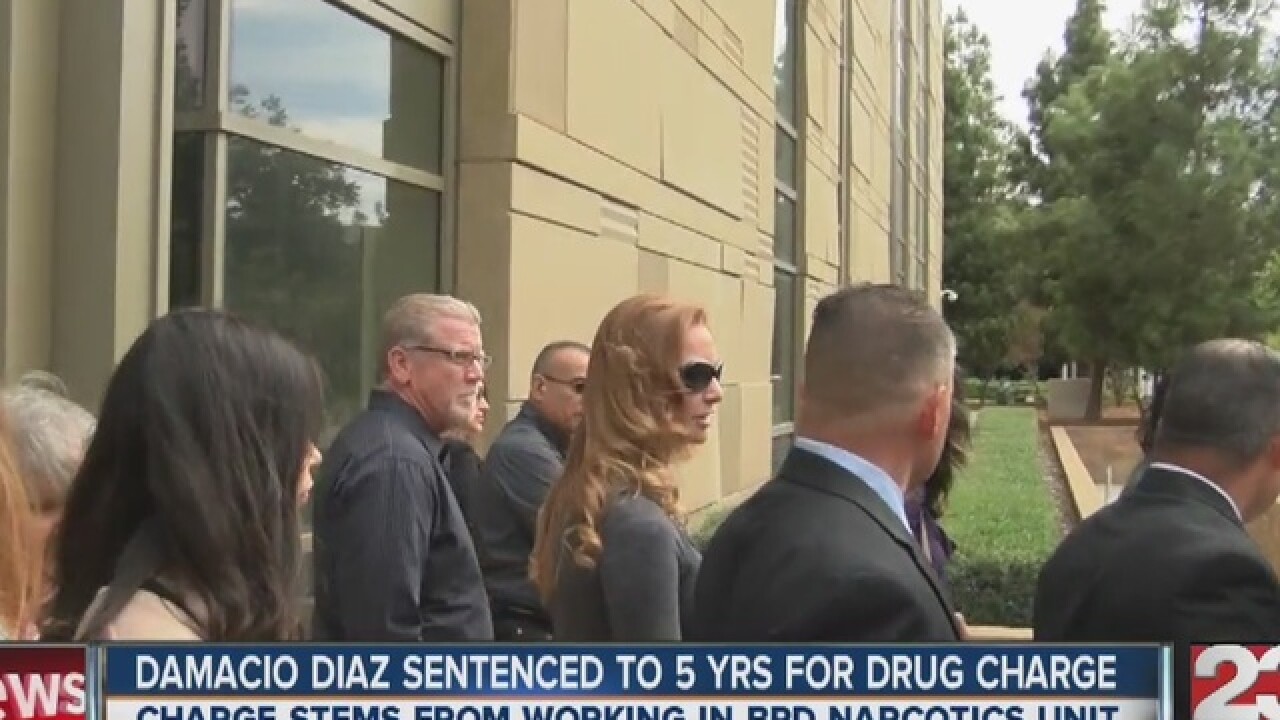 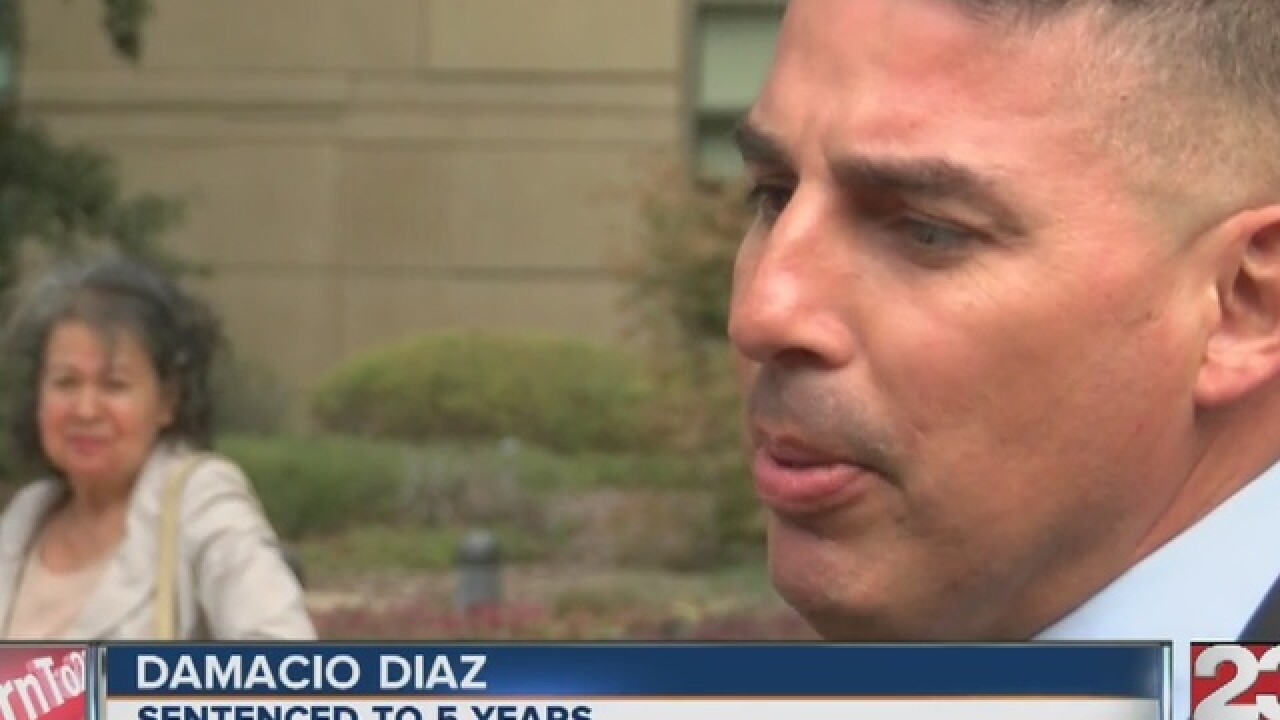 Damacio Diaz, 44, of McFarland, formerly a detective with the Bakersfield Police Department, was sentenced today to five years in prison for bribery, possession and attempted possession with the intent to distribute methamphetamine, and making and subscribing a false income tax return, Acting United States Attorney Phillip A. Talbert announced.

Full court documents of who Diaz is as well as Diaz's final statements before sentencing.

According to court documents, between April 2012 and February 2015, while employed as a police officer with the Bakersfield Police Department (BPD), Diaz handled a criminal informant who was involved in the large-scale sale and distribution of methamphetamine. Diaz continued to operate the informant even though he was fully aware of the informant’s ongoing criminal activity. During this time, Diaz received bribes from the informant in return for intelligence on law enforcement activities as well as protection from investigation and arrest.

In addition to accepting illegal bribes, Diaz also engaged in drug trafficking while with the BPD. On September 20, 2012, while on duty, Diaz stopped a vehicle operated by two individuals from Yakima, Washington and used a BPD dog handler and police dog to search the vehicle. The search uncovered an ice chest containing approximately 10 pounds of methamphetamine divided into multiple bags. The BPD dog handler did not seize any of the drugs from the vehicle, but turned the scene over to Diaz and Mara to secure the methamphetamine and oversee the investigation of the incident. A week later, Diaz booked approximately one pound of methamphetamine from the vehicle stop into evidence. Diaz and Mara maintained possession of the remaining nine pounds of methamphetamine, and they ultimately sold it for their own personal gain.

According to the plea agreement, Diaz also filed a joint income tax return for the calendar year 2012 that falsely reported total income of $168,485 and did not include additional income of at least $97,900.

Acting U.S. Attorney Talbert stated: “Diaz had a life that afforded him many opportunities, including the opportunity to serve and protect his community as an officer of the law. Diaz turned his back on those opportunities and broke the trust his community placed in him, violating the very laws he was sworn to enforce. Public corruption takes a heavy toll on our communities, and our office remains committed to prosecuting such conduct.”

Bakersfield Chief of Police Williams stated: “I appreciate the efforts of all agencies involved in this lengthy and exhaustive investigation and I am thoroughly satisfied with the ultimate conviction of Damacio Diaz. The behavior and criminal activity that was exposed during this comprehensive investigation is in no way reflective of the commitment and remarkable public service the over 500 employees of the Bakersfield Police Department provide to our community on a consistent basis. Diaz violated not only the trust of this organization but that of this community. The Bakersfield Police Department is committed to building and maintaining public trust by holding our employees accountable for their actions and we will continue to provide quality service to our community. We appreciate the support we have been given throughout this investigation and wish to thank the community for their patience and understanding.”

DEA Special Agent in Charge John J. Martin stated, “Damacio Diaz committed crimes in a community he took an oath to serve and protect. In doing so, he betrayed the trust of the public and his fellow officers.”

“Damacio Diaz used his lawful authority as a sworn peace officer with the Bakersfield Police Department to illegally enrich his self-interests,” said Michael T. Batdorf, Special Agent in Charge, IRS Criminal Investigation. “Greed was a major motivation for Diaz to begin making unfortunate decisions that brought him to conspire with drug dealers and accept bribes for money. IRS-CI will continue to work with our law enforcement partners and the United States Attorney’s Office to investigate these types of crimes that have a negative impact on our communities and the American Taxpayer.”

“Diaz's illegal activity caused irreparable damage to his reputation, put the lives of others at risk, undermined public trust in the Bakersfield Police Department, and facilitated criminal activity,” said Special Agent in Charge Monica M. Miller of the FBI Sacramento field office. “The FBI and its federal law enforcement partners will continue to identify and investigate individuals who violate their oath of service and ignore the commitment they made to their communities.”

This case was the product of an investigation by the Federal Bureau of Investigation, the Drug Enforcement Administration, the Internal Revenue Service-Criminal Investigation, and the Bakersfield Police Department. Assistant United States Attorneys Brian K. Delaney and Angela Scott prosecuted the case.