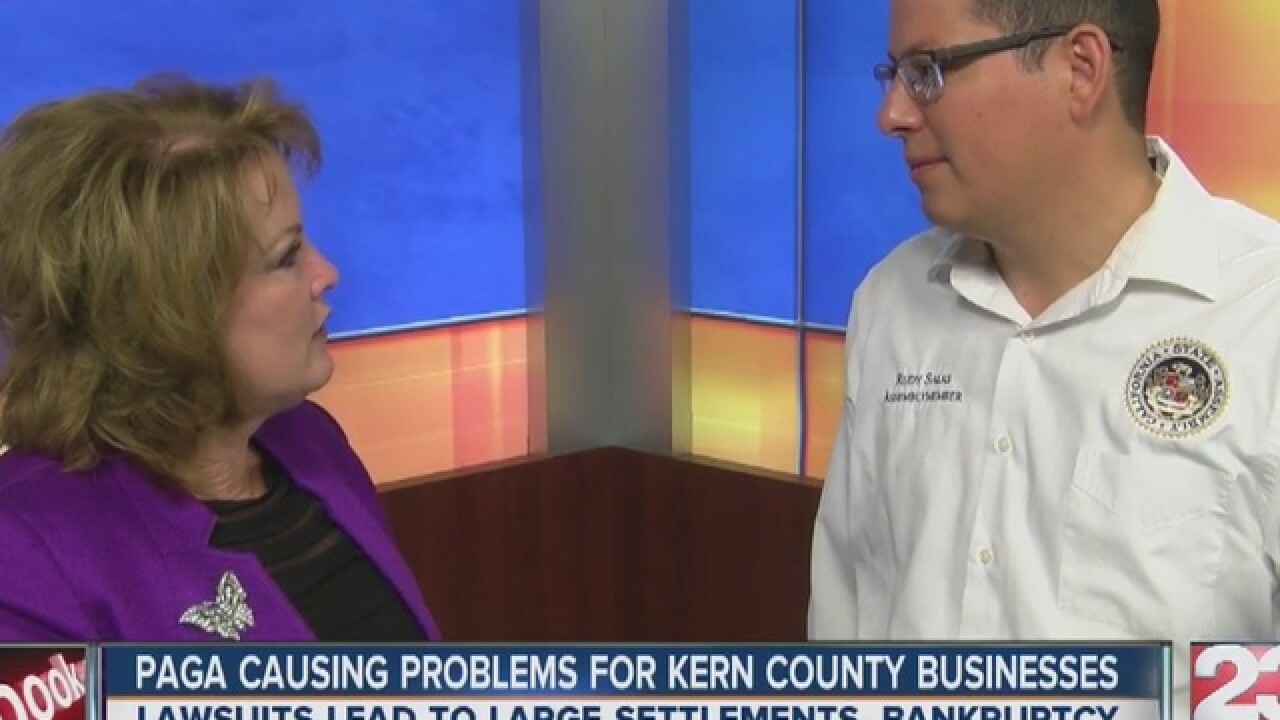 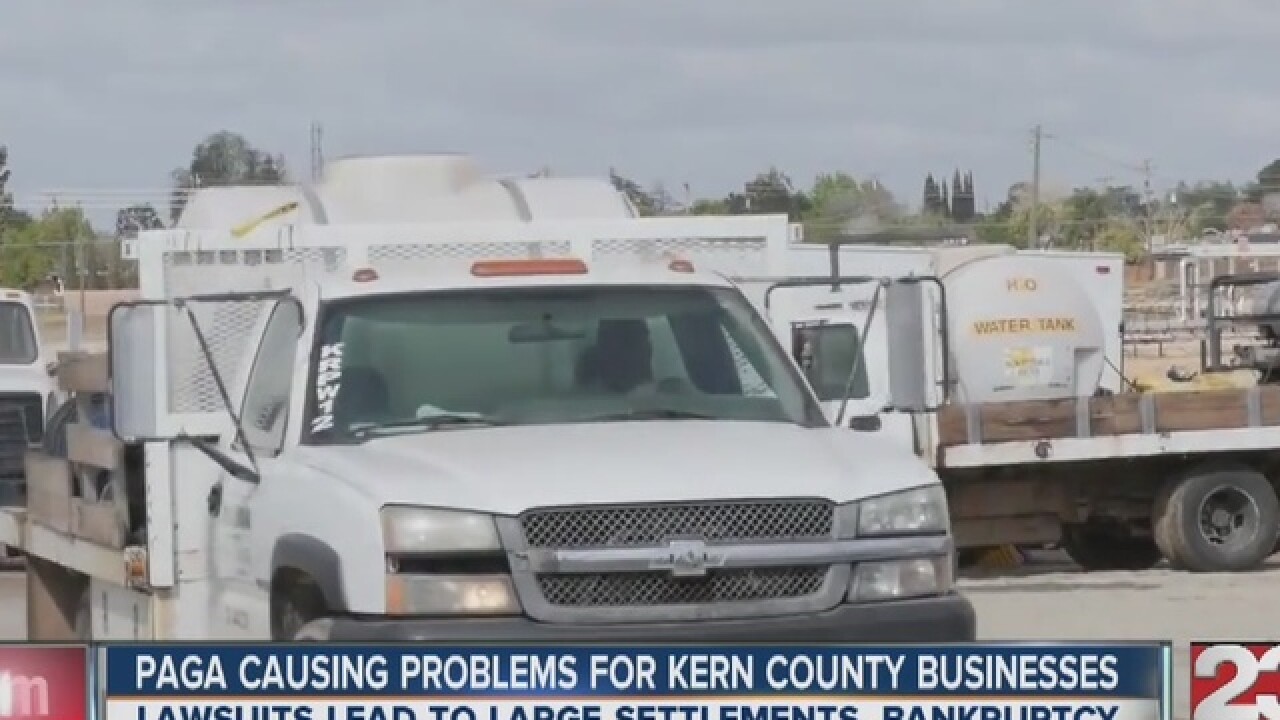 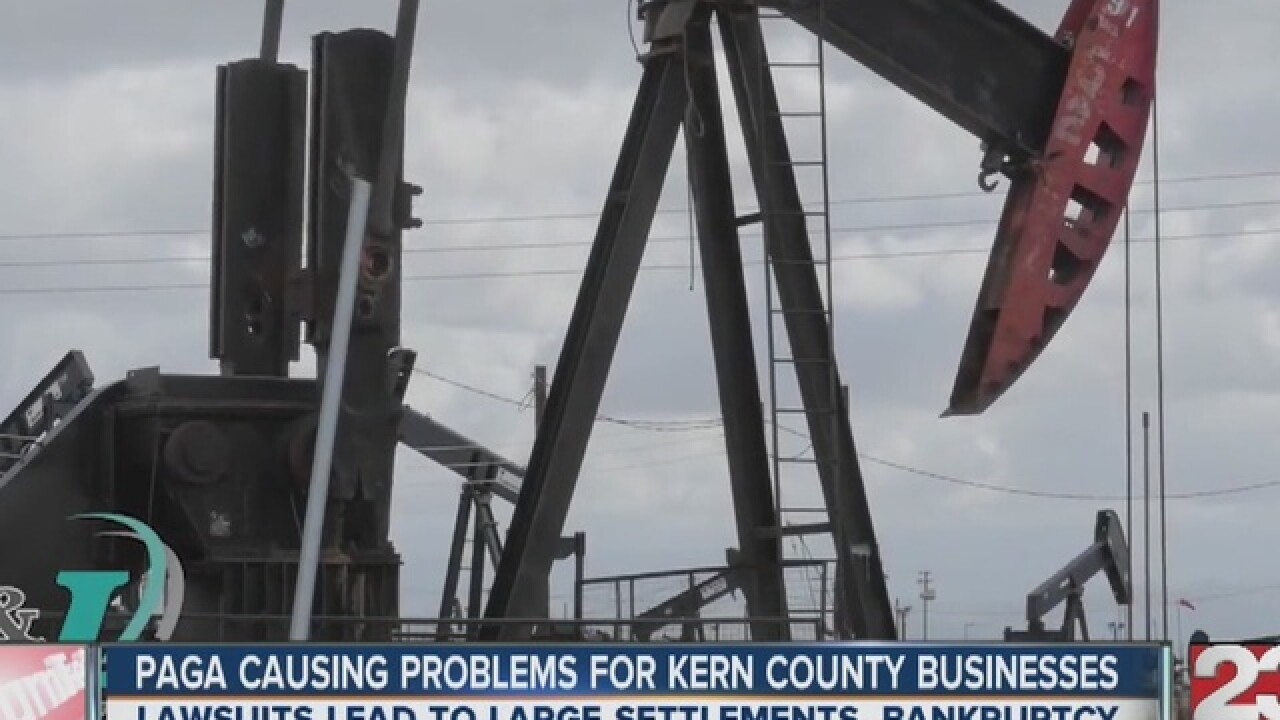 Assembly member Shannon Grove of the 34th District says PAGA was created as a revenue source intended to punish bad employers, but now contends the law has been twisted.

"Now you have these unscrupulous lawyers out there that are suing on technical violations like dashes, periods, commas," Grove said.

Grove, who is a small business owner, had a PAGA lawsuit brought against her, and settled a $30 million lawsuit for just under half a million dollars.

The reason for her PAGA lawsuit? The paychecks she issued to employees did not have inclusive dates (Grove's paychecks would just have the date the check was issued, i.e. 9/6/16, instead of the dates the check was meant for, i.e. 9/1/16-9/6/16).

Grove says she is not the only business that has been affected by lawsuits she contends are for minute details.

"There are actually 160 companies in Bakersfield that have been sued so far, primarily by the same law firms out of Los Angeles and San Diego," Grove said. "They are not lawyers from our district."

23ABC spoke with four local business owners who did not want to be identified because they are currently engaged in PAGA lawsuits.

Some said the class action lawsuits they received had a different business named than their own in the lawsuit, essentially a "boiler plate lawsuit".

Turley said many companies commit the same violations, so the lawsuits are often very similar.

Here is a profile on PAGA that Grove published on her Facebook in July:

HOW IT IS FILED

According to the business owners, here is how they received their PAGA lawsuits.

An employee, usually one that was employed six months or less or no longer works at the business, gets in contact with an attorney (sometimes through social media) and a class action lawsuit is filed.

The California labor board receives the lawsuit and has 30 days to act on it; if not, the lawsuit can go private.

The local businesses contend that lawyers are preying on these lawsuits that go private, "like a mill pumping out lawsuits".

All four business owners said there rarely is any warning that a lawsuit against the company is coming.

The business owners said the attorneys then make a list of what they want to see from the company, usually employee and company records. There is no length to how long the attorneys can take to look through those records.

PAGA has a four year statute, so, for example, if a lawsuit carries on for three years, the attorneys can go through records for up to seven years.

Many times, the lawsuit focuses on lunch breaks, rest periods, or in some cases, quarterly or holiday bonuses.

The business owners said they will not allow employees to socialize on the work site while clocked in because one company was sued for employees clocking in and grabbing coffee, another for talking in the parking lot after clocking out for work. The companies were cited for not properly paying their employees for those instances.

While the attorneys are looking through the files, the business owners said they are not told about what is wrong on a paycheck, so they cannot fix the complaint.

All four of the local business owners 23ABC spoke to said it then becomes a decision "to prove what is right" but to "show that you're right is too costly".

All agreed that "99% of employees don't want this (lawsuit)". Due to the high settlement amounts that many of these businesses face, bonuses, summer jobs and other "benefits" the company would give to employees are gone. The business owners say employees become angry because they never had an issue with the company in the first place.

Much like Grove's settlement, the business owners said settling can be the best way to handle these PAGA lawsuits, because the cost to battle in court can become too steep.

One employer said the company is battling their third PAGA lawsuit, with one resulting in $14.4 million in penalties. The company settled for $1.5 million.

Another business owner said "I spent my whole life building a business. 40 years of work could go away because of one lawyer from LA".

The business owners say those lawyers are the only beneficiaries of these lawsuits, because they receive thousands, even millions, off the lawsuits, whereas the employees that joined maybe get hundreds.

One business owner said a company's employees made $.31 while the attorney made thousands in the settlement.

WHAT'S NEXT FOR PAGA?

Grove and Assembly member Rudy Salas of the 32nd District came together to produce a bipartisan bill aiming to provide an employer the right to cure any violation before an employee could sue.

The bill, AB 1317, was stuck in the California Senate committee on rules last month.

23ABC spoke with members of both representatives' staffs and they said despite the bill not passing, they are both committed to working to pass something for PAGA.