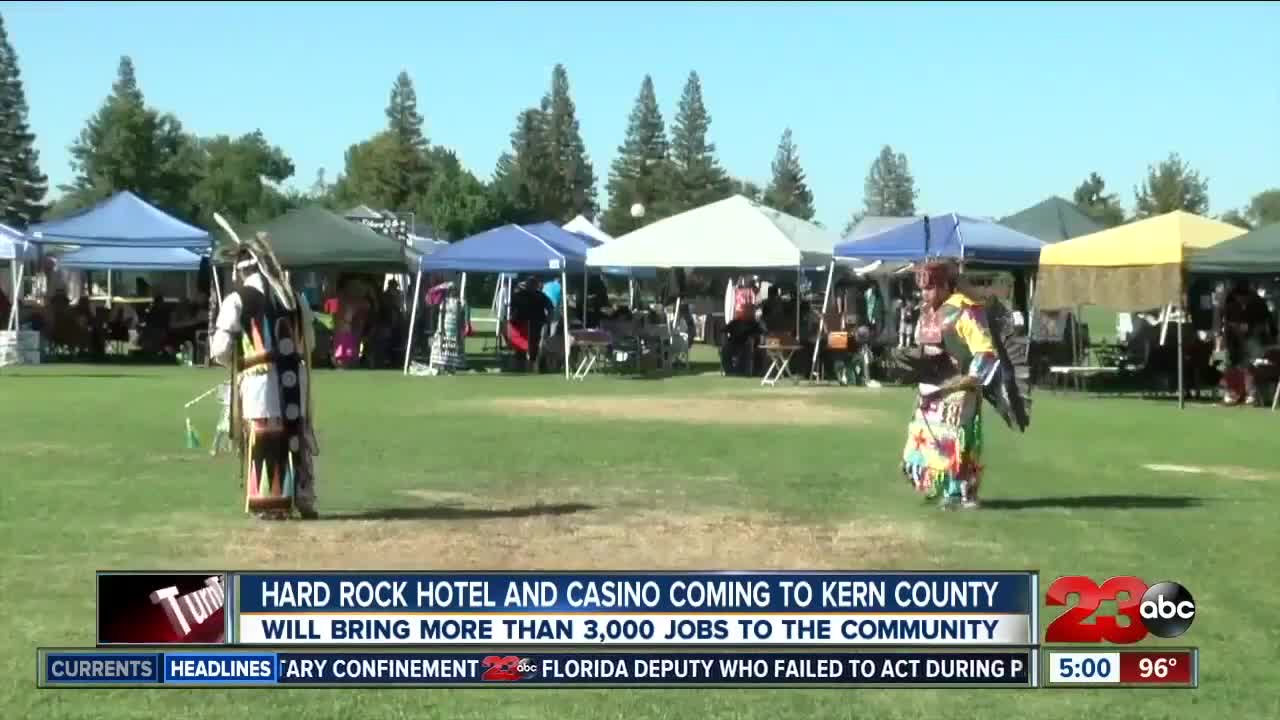 The Tejon Indian tribe in partnership with Hard Rock International have announced today that the two organizations are bringing a Hard Rock Hotel and Casino right here in our community.

The Hard Rock Hotel & Casino Tejon will be developed right here on over 300 acres of land, which is located just off highway 99 near the Mettler exIt.

Just about 20 minutes south of Bakersfield will soon be called home to the Hard Rock Hotel and Casino Tejon.
Scott Nielson, managing member developer, of Hard Rock Hotel & Casino Tejon says that the casino is projected to bring in more than 3,000 jobs and 1,000 of those will be for construction.

The projected cost to build the casino is around $600 million and an environmental report still must be done before construction can begin.

“Hard Rock’s interest in this area is because it believes that the Bakersfield and Kern County area Is underserved for this kind of entertainment,” said Nielson. “We believe that at this location we can build the type of facility and we project that it will attract people from all over California.”

The casino and hotel will sit on more than 300 acres of land located off Highway 99 and Highway 166. It will include a 22 acre RV park, 400 hotel rooms, a Rock Spa and Fitness center, resort pool and a convention center with an entertainment venue. 52 of those acres will be used for the actual structure of the hotel and casino.

The rest of the acres will be utilized for other usage the Tejon tribe will decide on at a later time.

“There will be a very large entertainment venue and meeting space which will be the largest in Kern County,” Nielson said. “Which will allow Kern County to hold events and functions that it isn’t currently able to host.”

The announcement came down on Tuesday as a partnership with the Tejon Indian Tribe and Hard Rock international. The Tejon tribe will own the casino but controlled by Hard Rock.

“We are in the process of moving forward and hope to conclude that process in a year. It would then take 18 to 24 months to complete the development and the construction of this project,” Nielson said.

The two companies have been working closely with the county, who tells 23ABC they are very excited about the partnership. The county says that the Hard Rock Hotel and Casino is going to have a great impact on Kern's economy.

“This is another company that is coming along and seeing the value that Kern County offers,” said Megan Person, director of countywide communications.

“We have had Amazon, Loreal, now we have the Hard Rock. Obviously Kern County has something to offer these big businesses.”

Person says the sheriff and fire department will be responsible for responding to the area and the casino will build additional infrastructure to support their needs.

“Because they will require fire and sheriff services this isn't formalized yet, but they will build a facility or station to help man the area,” Person said.

Officials added that it’s still unclear how much the county could benefit financially from this project.

“The county won't be able to tax the tribe, because it’s a government in of itself and a government can't tax another government,” Nielson said. “The tribe will enter into an agreement where they will pay the county as if they were being tax”

The actual date of groundbreaking here for the Hard Rock Hotel and Casino has not been finalized yet, but 23ABC is told the doors won't open until a few more years.