Kern Back In Business: Helping Santa Claus this Christmas

Kern County jobs being one of Santa's helpers 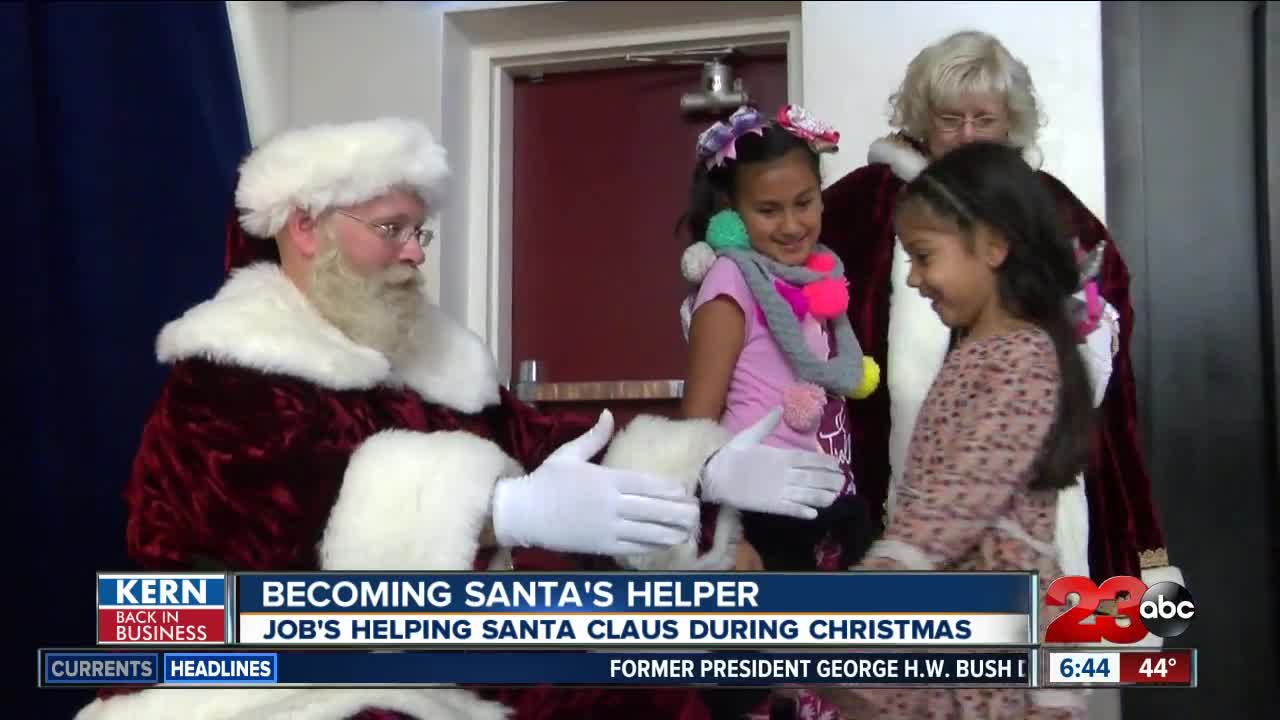 As the holiday season approaches Christmas, Santa Claus's helpers say Santa becomes extra busy helping the elves, checking toys and tasting cookies in the North Pole. So he need an extra hand from a few helpers.

Jaz Cherry proudly said, "I have officially been recruited by the big Claus five years ago."

While Brian Ostrovski recalled, "Thirty years ago I was at Bakersfield High School and one of my teachers asked me to be a Santa Claus for the children that we took care of in a class that we were a part of. And I went ahead and said I'll do that."

Both of those men are certified Santa's helpers. They said, Santa Claus recruits helpers around the world to spread holiday cheer, stand in for photos and accept letters for St. Nicholas, which they send to the North Pole.

Both of these Santa's helpers, Cherry and Ostrovski, were trained and approved by Santa Claus to help him visit the children of Kern County before Christmas.

Ostrovski said, "I did get approval from actually the, I'd say head elf, Susan Mesco, who she is the head elf of the Santa schools."

"I have gone to the International Santa School," said Cherry. "I have also taken the Santa Claus Oath with the International Brotherhood of Real Bearded Santas, which works for Santa Claus. And I have had training sessions with many other Santas to make sure that I am up to snuff."

For Santa's Helper Ostrovski he said being one of Santa's helpers runs in the family, starting with his mother-in-law and father-in-law.

"He was definitely the lead Santa in it. And also my mother-in-law, she was definitely loved Christmas. As a matter of fact some of the ordainments on our tree are from her Christmas Tree," said Ostrovski.

While Santa's Helper Cherry said it's something he does for the children.

"It is a complete passion of mine. Making sure that children still believe in Christmas, still believe in the reality of Santa Claus even though they don't get to see him on Christmas Eve because he has to move so fast," said Cherry.

After receiving his Santa's helper uniform, Cherry said he got his first helper job volunteering at a hospital.

"I went to the hospital in Madera," said Cherry. "And talked with the administrators and asked if it would be okay if I walked around and met all the children and let them know that I still remembered them and wanted to give them a big hug and candy cane for Christmas. And they said that was a great idea. And everything grew from there."

Santa's Helper Ostrovski also said he got his start by word of mouth.

"I just happened to put a picture up on Facebook with the Santa outfit," remembered Ostrovski. "I was just kind of having fun. And then within five minutes I was getting messages of can you come and be Santa."

Robert Garza, who's one of Lowe's store manager said they looking for a couple of Santa's helpers. He said, "Anywhere from three to five, just depending on the foot traffic in the store."

Garza said Lowe's is hiring Santa's helpers to be at all their Bakersfield stores every Saturday and Sunday until Christmas.

"We just want something for the kids," said Garza. "It's something new for us, we've never done it in the past. And it's been exciting to see the looks on the kids' faces this year as they come in and see Santa."

If you get the call from St. Nicholas to be one of his helpers, his current helpers have these tip for you.

Ostrovski said, "You'll know the first year if you want to continue to be Santa. 'Cause that's the moment you decide is that something I want to do forever."

Cherry said, "Make sure to always put your best foot forward. If you think Santa wouldn't say it, don't say it. Always ask yourself what would Santa do. So long as you have the right heart, you can be Santa."

If you would like to become one of Santa's helpers, his helpers said a good place to start is at Santa school. Here are some links to a couple of Santa schools: