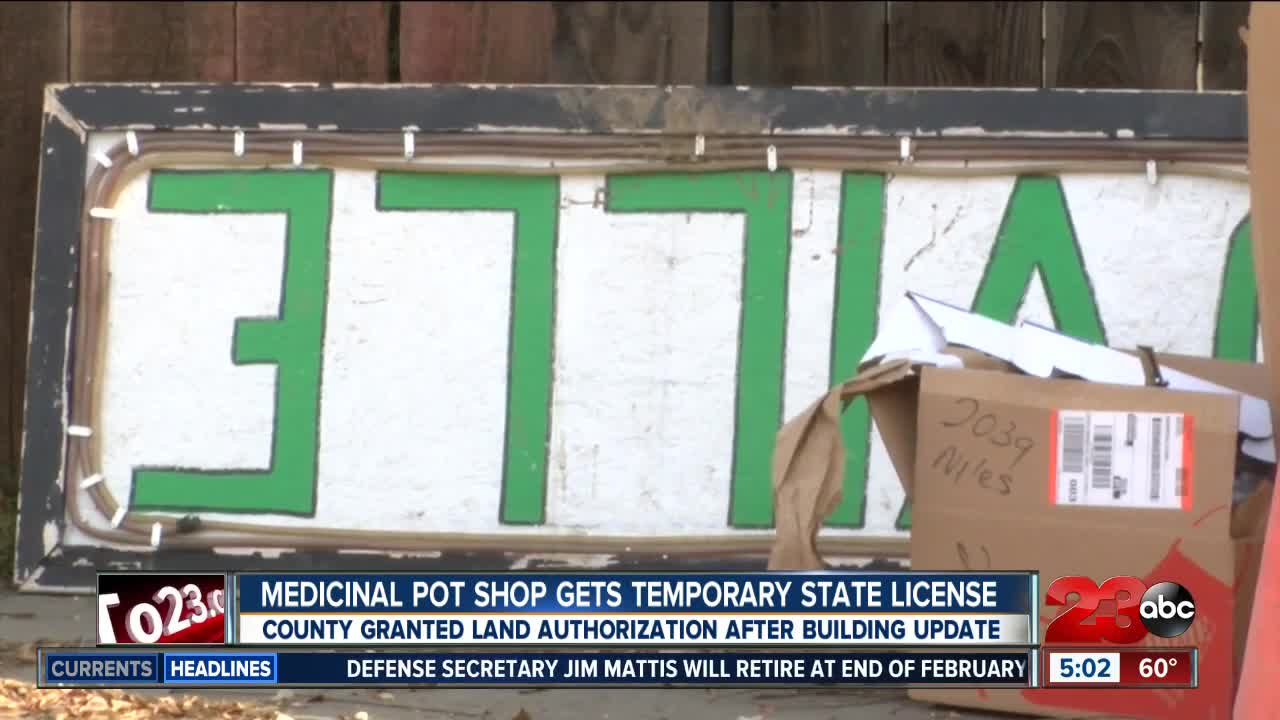 BAKERSFIELD, Calif. — A medicinal marijuana shop in Oildale, managed to get temporary state licensing in Kern County even though there is a county wide ban on medical marijuana shops.

23ABC News spoke to the county, the state and other medical marijuana shop owners to better understand how the shop became licensed and what's next for others like it.

“The Crop,” medicinal marijuana shop in Oildale took to social media Tuesday announcing in an Instagram post that they were quote, "Kern County's first state licensed medicinal cannabis dispensary." What viewers may not have realized, is that the picture of The Crop’s new license also said, “temporary,” and according to the the county's planning director, Lorelei Oviatt the reason the shop was granted land authorization is because they were the first to complete building renovations of the 29 shops in Kern County that qualified to work towards obtaining a building permit and were given a green light by the county as part of standard procedure.

However, other medical marijuana shop owners just like "The Crop" said there is only one reason to continue renovating your medicinal cannabis property in Kern County at this time,"The county gives the state authorization to issue you a license for the cannabis sales temporarily until May 24th 2019," Budville medicinal shop owner Steve Duce said.

According to Oviatt and Duce, once a qualified shop owner completes the building permit and gets land use authorization from the county medicinal shops like Budville and The Crop can apply for a temporary state licensing.

The California State Bureau of Cannabis Control said the temporary state license that The Crop received is only good for 120 days and may be extended for an additional 90 day period.

However, according to Duce he can't just pack up and leave his Budville shop and stop renovation because he still needs to work towards obtaining a temporary state license like The Crop shop did to avoid jail time, "I need to make these repairs in order to be compliant with the state of California's Bureau of Cannabis Control because they now will require on January 9, that you have some form of state licensed issued by them. Therefore, if I didn't comply with what the county has asked then I would probably be smart to shut down and get out because I would be a criminal selling unlicensed illegal products just like I was back on the street."

According to Duce the building permit alone was $40,000 and the new building renovations were also an additional cost that he is taking on in hopes of avoiding criminal charges for operating without a form of state licensing.

The county said that after the 120 day period The Crop will have to apply for annual licensing, part of that license application process requires local county approval. Oviatt said the state will likely see that there is a county wide ban and will have to make a decision on whether or not to grant The Crop a permanent license to stay in business beyond May 24, 2019.

Store employees and owners of The Crop, who would not do an on camera interview with 23ABC News told our reporters over the phone Thursday that they are excited to open up for shoppers again Friday.

23ABC News will also be attending the reopening Friday December 21, to see if the shop owners may be willing to comment further.