Mother of late CHP officer who committed suicide speaks out 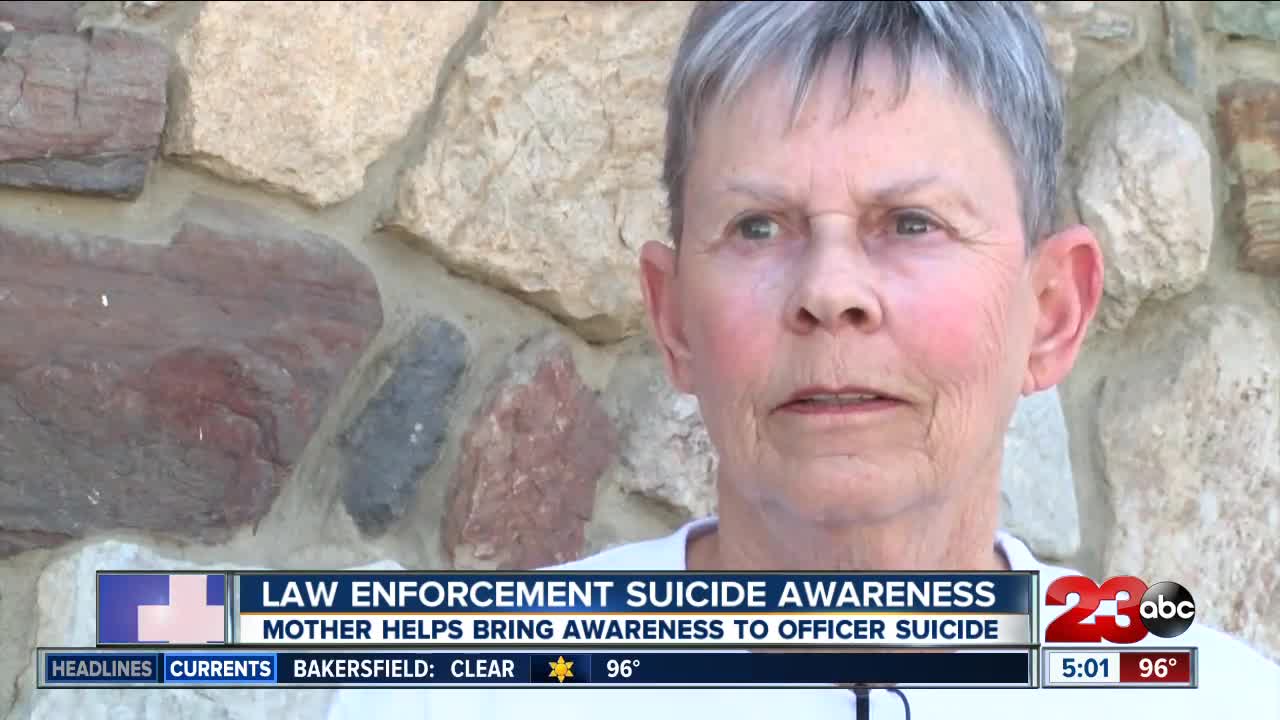 Mother speaks out about loss of son to spread suicide awareness

BAKERSFIELD, Calif. — It's an issue that is rarely talked about: Suicide among peace officers.

On Friday, 23ABC spoke to a local mother about the loss of her son to help bring officer suicide out of the shadows and to shine light on the warning signs and resources available to them.

Carol Mallory said she has been waiting for an opportunity to talk about this issue with the community for several years following her son Michael Mallory's death in October of 2015. And since September is suicide awareness month, Carol decided to share her son's story.

Michael worked as a California Highway Patrol officer for several years, battling the everyday stress that comes along with the job.

"it was so overwhelming in that moment my body completely went numb," Carol Mallory said.

She described the moment she found out her son Michael took his life.

"I received a call from the CHP commander and he explained to me that my son was dead by a self inflicted gun shot to the head," Carol said.

She said Michael was a man of many talents before he died by suicide at age 41. Carol said after his time as a mechanic he wanted a new path, one that was less traveled by others.

"He decided he would try to be a CHP [officer]," Carol said.

Michael who grew up in Taft, worked in Buttonwillow and Santa Maria as a CHP officer after his graduation for more than a 15 years.

He decided to raise a family of four in Arroyo Grande but after a number of years in the line of duty Carol said she started to see a change in her son.

"I could tell he was becoming a little depressed and a little disenchanted with his job," she explained. "I think it was all the PTSD that he suffered," Carol said.

She said deadly crashes, especially one with young children took a toll on Michael, which led him to eventually reach out to the employee assistance program at his CHP department.

According to the California Police Chief's Association a recent nationwide study found more law enforcement officers died by suicide than in the line of duty.

Both CHP and the Bakersfield Police Department said they provide free peer support groups made up of veteran officers from different divisions to act as outlets for officers.

They also provide employee assistant programs, free counselors, therapist, and psychologist that their officers can talk to who have gone through similar traumatic events .

However, Carol said, in this particular line of work-- talking is usually the hardest part.

"I think he was very hesitant to get help because it is particularly shameful in this line of work because your supposed to be bigger stronger tougher than the average guy and your perceived as weak. So if you take your life there is something very shameful about that and so it's not talked about," Carol said.

Sgt. Nathan McCauley of the Bakersfield Police Department said they are constantly tracking which critical incident calls act as triggers for most officers, so that they can combat the issue and further debrief their team after traumatic events.

They say each call can impact each person differently.

"It's a hard group but it's not a one-stop shop thing it's something that you have to make sure it's available, that they know it's available and when they are ready they will," Sgt McCauley said.

McCauley and Carol both said in order to bring suicide out of the shadows we have to start by asking.

"When you feel like somebody may be having those thoughts, there's no shame in speaking up. Ask them straight out are you considering suicide," Carol said.

If you notice your loved one acting differently remember to ask and for anyone who may be having those thoughts, law enforcement officials want to remind you that you can always stay anonymous and help is available.