Mothers turn to placenta for support after pregnancy 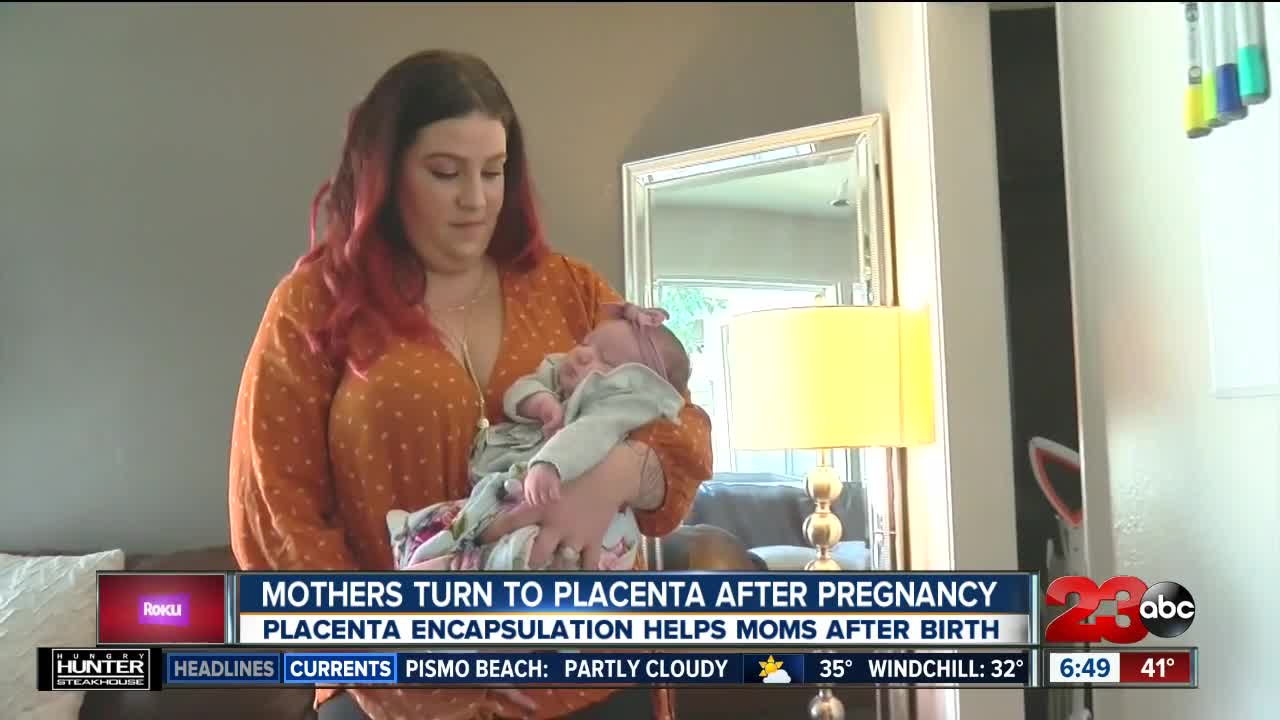 Mothers in Kern County are turning to the placenta to help restore their bodies after birth.

BAKERSFIELD, Calif. — Many women are taking a pill they said is helping them regroup after pregnancy but the ingredients are not what many viewers at home would expect.

23ABC News spoke to a mothers about why they are ingesting life supporting organs daily to help restore their bodies after birth, and she also spoke with female health experts who have insight on the growing trend and the risks associated with it.

The placenta is the life supporting organ for a fetus but now many mothers in Bakersfield are consuming their placenta in pill form after they give birth. The placenta is an organ that develops in a woman's uterus during pregnancy. It provides oxygen and nutrients to the baby and filters out waste from the baby's blood according to OBGYN doctor Philipp Melendez. However, mothers are choosing to consume their placenta for what some believe helps breast milk production, postpartum depression and after pregnancy weight loss.

Placenta Encapsulation Specialist Julianne Corona is making the process for new mothers providing placenta pills with her mommy made encapsulation home business, "Once the placenta leaves the hospital odd as it sounds the placenta is considered a consumable so OSHA becomes a governing agency that oversees so it's OSHA safe food handling," Corona said.

Corona's passion for the placenta started with her own pregnancy, "When I became pregnant with my now three year old I heard about it oddly on Keeping Up With the Kardashian's and so it peaked my interest, I started looking into it, seeing what all of the benefits were and it was amazing. So I looked to see who could do it here in our community and there was nobody offering the service," Corona said.

So to give women like her in Bakersfield the option she obtained her license to transform placenta into pill form for $150 dollars. "There is a company called PBIU which is Placenta Benefits and then I also went and got further training through a fellow encapsulation specialist ant trained with some midwives as well," Corona said.

According to Kern County Public Health there are no California laws or regulations that have any provisions specific to human organ consumption or processing.
According to Corona she also obtained her OSHA safe food handling certification so she could open up her own lab inside her home, "The training that I did we do traditional Chinese medicine and the way that it is different compared to the smoothies or raw is the fact that we cook it first," Corona said.

Some women have reported eating their placenta raw, or in a smoothie form but Dr. Melendez said that it’s unsafe because of the harmful bacteria that can live on the placenta. In order to kill bacteria Corona sanitizes and cooks the placenta at 220 degrees, "We cook it for 30 minutes and then from there the placenta get's cut into smaller pieces and those pieces get placed onto a dehydrator, they dehydrate for 12 hours and then we crush them up into a powder form and then we place them into flavored capsules for the mom and deliver it to her between one and three days."

Dr. Melendez is now recommending the pills to his patients, "Out of the more 1,000 patients that Julianne has taken care of with the pills not one of them had a bad adverse reaction everyone said all good things including breast milk production, decrease chance of postpartum depression and just the energy that patients need after having a baby," OBGYN Dr. Melendez said.

According to the Center for Disease Control (CDC) report, "Scientific evidence to support psychological and physical benefits is lacking." However, thousands of experienced and new mothers in Kern County and across the nation are willing to take their chances with their own placenta in the hands of Corona.

"Why wouldn't I try it if it could help me?" Bakersfield resident and mother of four, Sarah Yeager took that risk in hopes of reaping the benefits,"The first two I did not encapsulate my placenta with and the last two I have and I can tell you it's just like a night and day difference," Yeager said.

According to Yeager after her first two pregnancies both times she experienced postpartum depression after giving birth and was unable to breast feed proficiently. After she became pregnant the third time she began looking for post pregnancy alternatives, “For me I am going to listen to other moms I am going to listen to people who have been through it personally rather than a doctor who has not personally done it or researched it really."

Yeager still consulted her doctor before making her final decision, "You know and he was kind of like if that's what you want to do..he wasn't against it but he wasn't like oh yea giving me all of these scientifical facts," Yeager said.

Ultimately Yeager made the decision to encapsulate her placenta and she said it made a substantial difference, "With my last two I have been able to fully breast feed them, my third was for almost three and a half months which is huge for me because the last two without the encapsulation was like two weeks."

Yeager said she also lost a significant amount of weight and parted ways with depression, "But with my last two I have had no sort of postpartum at all."

However, the CDC said one mother in Oregon had a baby who contracted GBS, “That's a bacteria that's found in the vagina, the affect mam is baby can die I've seen it more than once so it's very serious bacteria," Dr. Melendez said.

It's unclear in the CDC’s study where the baby contracted the GBS but the CDC said the Oregon mom admitted to taking placenta pills shortly after giving birth. But Corona said in that case proper decontamination methods weren't used, "Well they did what's called the raw method of encapsulation which means all they did was just rinse it off and then dry it out."

Both Yeager and doctors said you should do your research, "Yea I mean I was skeptical I think you know everybody should do their research,” Yeager said.

Corona said one placenta can yield up to or more than 100 pills and dosages are based of how each mom is feeling. Dr. Melendez said out of the 30 patients he sees a day at least one mom inquires about placenta encapsulation. However, neither Dr. Melendez or Corona recommend eating other peoples placenta for safety reasons.