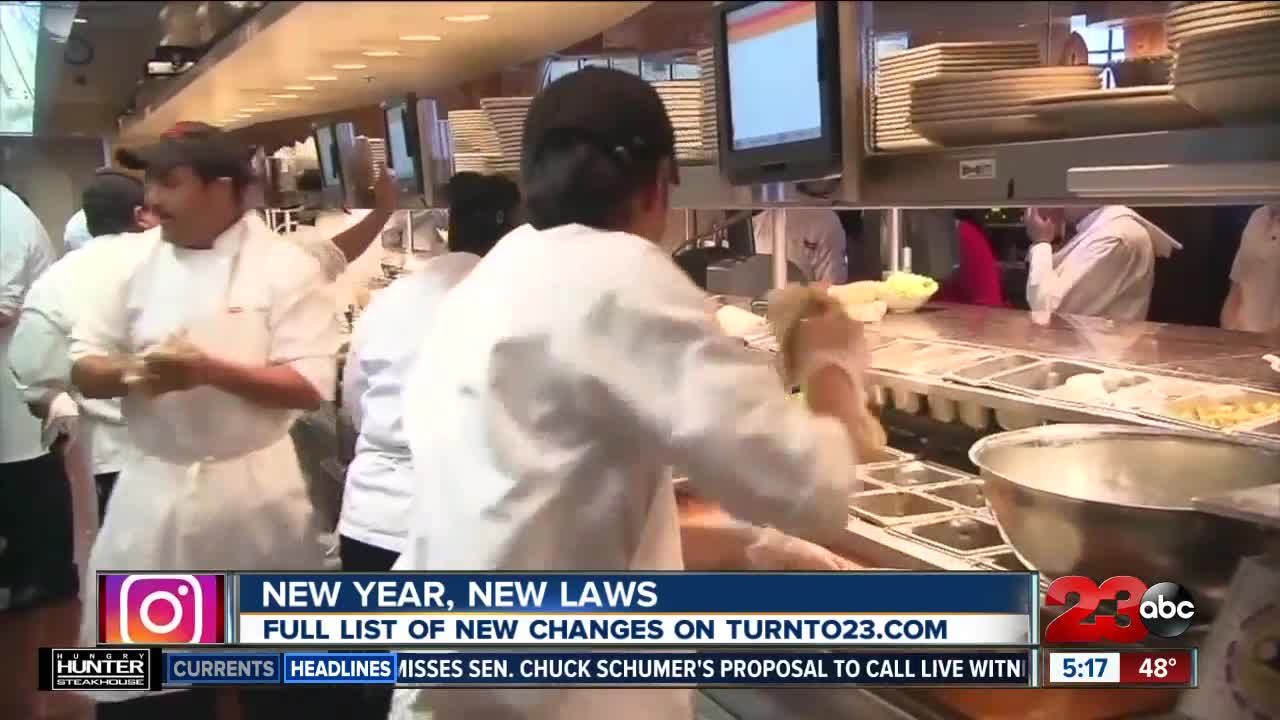 It's almost the New Year but this also means new state laws will also be going into effect in California.

BAKERSFIELD, Calif. — While internet companies have prospered with little oversight in the past decade, 2020 ushers in a new era California with more protections for internet users and the rising number of gig workers.

Our affiliate, KABC, put together this detailed list of new state laws that will take effect on January 1, 2020.

AB 5: Independent workers
While aimed directly at gig workers, this new law may also apply to many more contract or independent worker in California. Under AB-5, workers would be considered employees and not independent contractors if the employer controls the work, directs them in the course of their work or if the worker's job is part of a company's core business.

SB 188: Hairstyles
California becomes the first state to ban workplace and school discrimination based on a person's natural hairstyle or hair texture. Protected hairstyles include braids, twists and locks.

SB 142: Lactation accommodations
While California has had a law requiring employers to provide breaks for nursing mothers, many were forced to express breast milk in a bathroom stall or office closet. This new law requires companies to provide appropriate lactation accommodations that is close to the employee's work area, has electrical plugs and is free of intrusion.

SB 1343: Sexual harassment
Requires businesses with at least five employees to provide sexual harassment training to its employees within six months of being hired, and every two years after that.

SB 83: Paid family leave
New parents will have more time to care for their child. Benefits under Paid Family Leave will increase from six weeks to eight weeks starting on July 1, 2020.

HOUSING
AB 1482: Rent control
Communities without their own rent control laws will now be covered by statewide rent control protections. The law limits rent increases to 5 percent each year plus inflation, but never above 10 percent total. The law does not apply to housing built in the 15 years prior. The limit is a rolling number so the date housing is excluded changes every year.

RELATED: What to know about California's newly-approved rent control law

AB 652: Religious displays
You have more protections to display religious items like menorahs or crosses outside your home. The law prohibits landlords and homeowner associations from banning the display of religious items on entry doors or door frames. The items cannot be larger than 26 by 12 inches.

PRIVACY
AB 375: Online privacy
Want to know what information companies like Facebook or Google are collecting about you. The California Consumer Privacy Act (CCPA) gives internet users more control over their data. Among other things, the law gives users the right to know what data is collected, the right to reject the sale of your information and the right to delete your data.

RELATED: The Secret Life of Smartphones: Who has your information and where it's going

EDUCATION
SB 419: School suspensions
Students in elementary school can't be so easily suspended for causing trouble at school. The law bans schools from suspending students in grades 4-8 for disrupting school activities or defying teachers and administrators. Students in grades K-3 already have this protection. High school students must wait until 2025 for the same benefit.

HEALTHCARE
SB 104: Healthcare for undocumented immigrants
California becomes the first state in the nation to offer government-subsidized health benefits to young adults living in the country illegally. The law expands the Medicaid program to include low-income adults age 25 or younger regardless of their immigration status.

AB 2119: Transgender youth
Transgender youth in the foster care system will get appropriate health care. The law is the first in the country to include access to gender-affirming medical services, mental health counseling, hormone therapy and surgery.

SB 970: Human trafficking
Operators of motels and hotels in California must provide training to teach its staff how to identify victims of human trafficking.

ANIMALS
SB 1249: Animal testing
Prohibits the sale of cosmetic products with ingredients that were tested on animals after January 1, 2020. The law does not affect products sold globally where animal testing is required by law.

AB 1762: Dog areas
The California Department of Parks and Recreation has until July 1, 2020 to establish a comprehensive list of state parks that allow dogs, including the specific areas that allow dogs and the total miles of trails that are open to dogs.

This article was originally posted by KABC's Juan Carlos Guerrero.