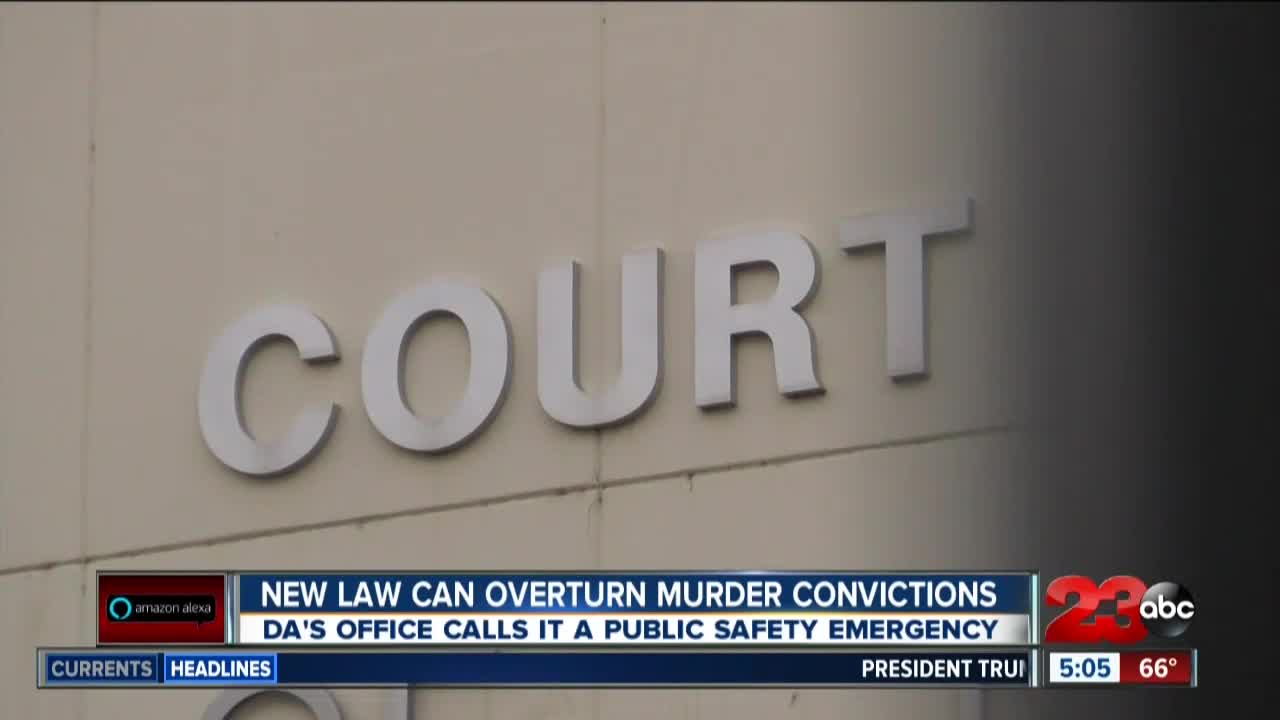 Senate Bill 1437 in part states "this bill would require a principal in a crime to act with malice aforethought to be convicted of murder except when the person was a participant in the perpetration or attempted perpetration of a specified felony in which a death occurred and the person was the actual killer." BAKERSFIELD, Calif. — Senate Bill 1437 in part states "this bill would require a principal in a crime to act with malice aforethought to be convicted of murder except when the person was a participant in the perpetration or attempted perpetration of a specified felony in which a death occurred and the person was the actual killer."

As a hypothetical example, if a group of people plan to rob a bank and the plan is for no one to get hurt but one person kills the bank teller, the person driving the getaway car would not be convicted of murder because it was not part of the plan. This new law allows anyone in a situation like this to file for an appeal, no matter how old the case.

The District Attorney's Office said the wording of the law does not match the intent. They say the wording gives anyone who has ever been convicted of murder the chance to file the same appeal.

"Not only did it redefine murder, it made it so that everyone who has a murder conviction, ever single convicted murderer has a free chance to send a petition to ask that their murder conviction be vacated," said Deputy District Attorney Joseph Kinzel.

Kinzel said he's concerned that they'll receive a flood of appeals, adding more work for the DA's Office because they'll be required to re-investigate every murder case.

"If you're convicted of murder and Governor Jerry Brown gives you a chance to get out of prison having murder conviction vacated, odds are you're going to take a shot. So that's why we're talking about hundreds and even thousands or murder convictions and the possibility that those murder convictions will be washed away," said Kinzel.

Criminal Defense Attorney Kyle Humphrey said he feels no sympathy for the DA's Office and extra work they'll have to do.

"If my prosecutors, the people I pay taxes to to enforce the law, have to do a little more work and that protects freedom and does justice I'm okay with it," said Humphrey.

Humphrey said he supports the law and believes if you did not pull the trigger, you do not deserve to be convicted of murder in these unplanned murder instances.

"People who actually want to kill someone and have malice in their hearts and do kill people still get punished for murder but the other person in the car, they're not going to spend life in prison," said Humphrey.

Kinzel said the main concern is who is given the opportunity to submit these appeals.

"Even if somebody plead guilty to murder, they admit it, I did it, they plead guilty, they can still do the same thing," said Kinzel.

A judge will have the final say on if an appeal is granted.