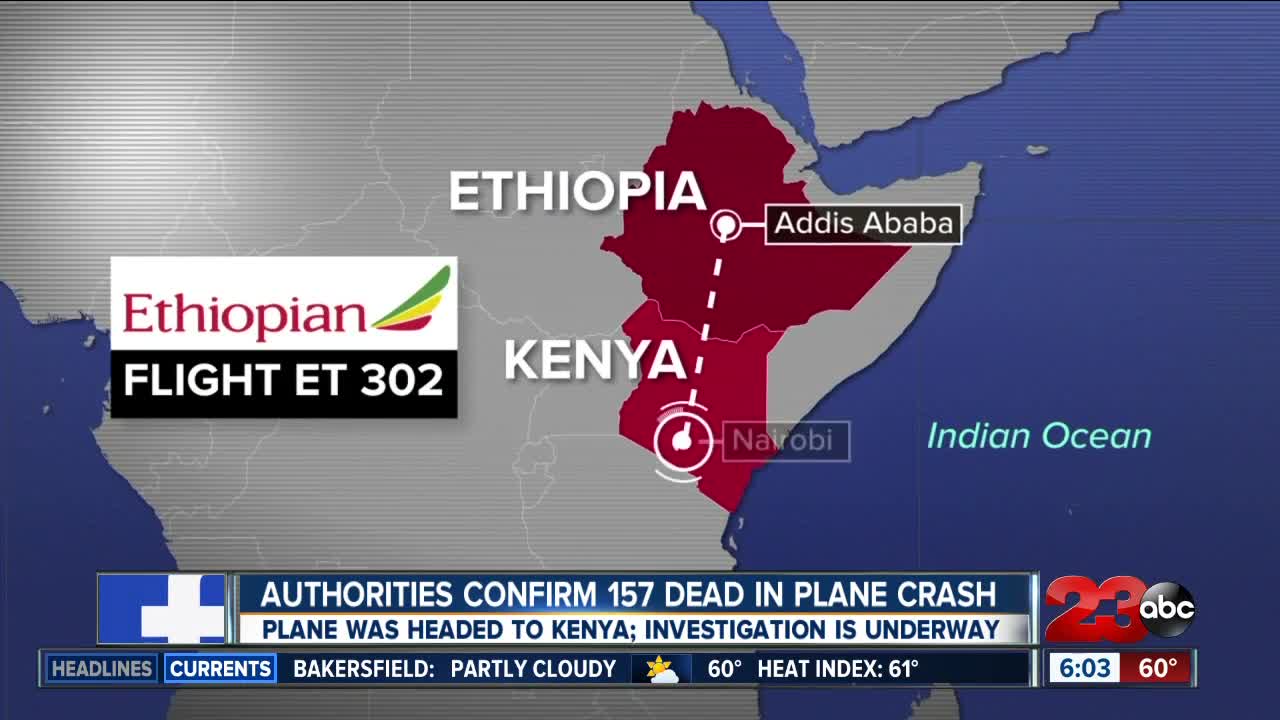 Thirty two different countries were represented on the flight

An Ethiopian Airlines plane with 157 people on board, including eight Americans, crashed Sunday just minutes after taking off from Ethiopia's capital, according to the airline and reports.

Everyone on board was presumed dead, Ethiopian Airlines said in a statement. The country's state broadcaster said all of the passengers perished in the crash, according to the Associated Press.

"At this time search and rescue operations are in progress and we have no confirmed information about survivors or any possible casualties," the airline said.

Flight ET302 took off from Bole International Airport in Addis Ababa at 8:38 a.m. local time, the company said. Its destination was Nairobi, Kenya, according to the airline.

It lost contact six minutes later, according to the airline's statement.

There were believed to be 149 passengers and 8 crew members on board, the airline said. However, it said it was "confirming the details of the passenger manifest for the flight."

In addition to the eight victims from the United States, the AP reported that there were 32 Kenyans and nine Ethiopians on board; eight people from China and Italy; seven passengers each from France and Britain; six from Egypt; five from the Netherlands; and four each from India and Slovenia.

The U.S. Embassy said it was aware of the crash, and released a statement before it was announced that there victims from the United States. The embassy is working with the Ethiopian government to identify Americans who were on the flight, it said in a statement.

"We extend our sincerest sympathies to all who are impacted by this tragic event," it said in a statement. "We are in contact with the Government of Ethiopia and Ethiopian Airlines to offer all possible assistance, and to determine the status of any Americans who may have been on board."

The bodies will be delivered to the families of the victims once they are identified, Ethiopian Airlines said in a statement, adding that it has already been in contact with the families of victims.

The plane was a new Boeing 737 Max 8, the same type of plane that crashed in Indonesia in November, killing the 189 people on board. It started service in May 2017.

China's civilian aviation authority ordered all Chinese airlines to ground the Boeing 737 Max 8 after the crash, The Associated Press reported.

Boeing said it was "deeply saddened" about the crash.

"We extend our heartfelt sympathies to the families and loved ones of the passengers and crew on board and stand ready to support the Ethiopian Airlines team," the company said in a statement.

The National Transportation Safety Board said it is sending a team of four to assist in the investigation. The Federal Aviation Administration announced that it plans to join the NTSB in its assistance with Ethiopian civil aviation authorities to investigate the crash.