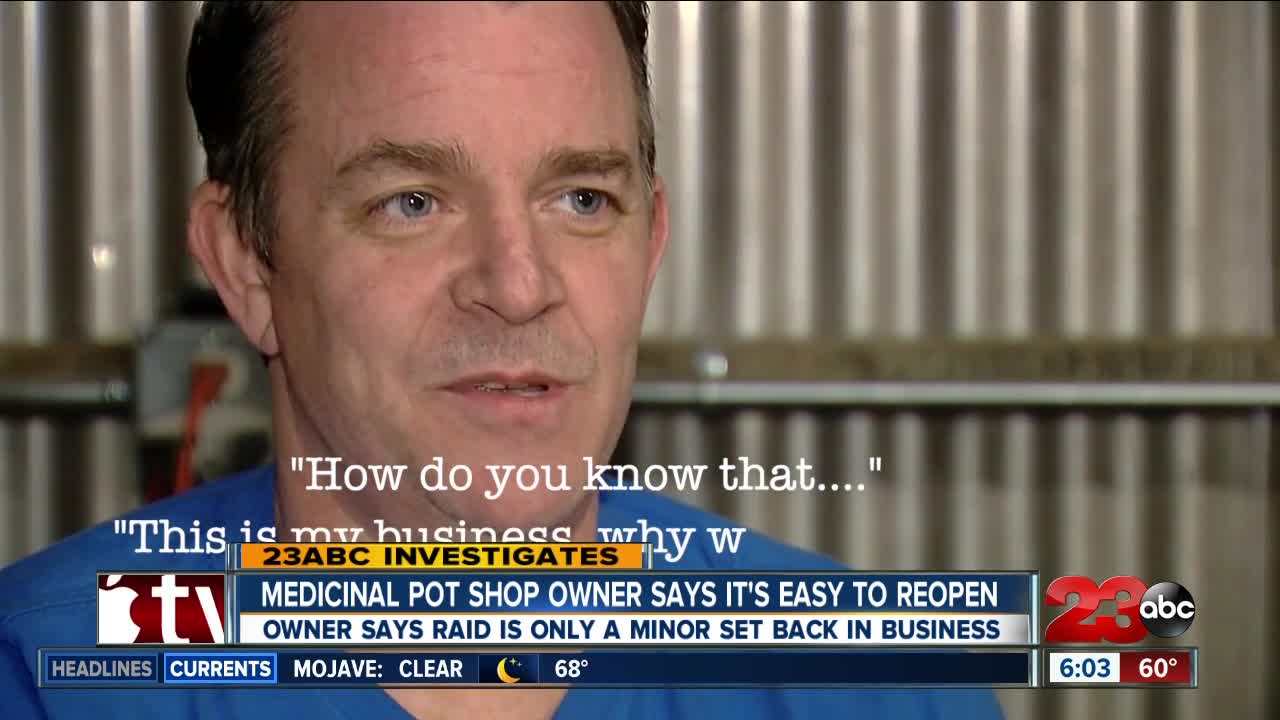 Pot shop owner says being raided is a minor setback

Law enforcement agencies said shops are popping up faster than they can shut them down.

23ABC's Tori Cooper's spoke to a shop owner who was raided six days ago, but is now back open.

Cooper headed back to East Bakersfield to the Budville medicinal marijuana shop that was raided just six days ago and today the owner, Steve Duce, told Cooper the recent raids are only a minor set back for him and his clients and even though it may not look like it, he's back open for business.

In the last seven days, seven illegal marijuana dispensaries were shut down by either the Bureau of Cannabis Control or the Kern County Sheriff's Office.

Cooper stopped by each illegal dispensary that has been recently raided in Bakersfield and Kern County to see if they were actually still closed.

Some let her walk right in, like the Knotts Collective, where one employee told her they were open when she simply asked.

Further down the street, at the Backyard Organics marijuana shop, she also simply asked if they were open and one man told her they were doing business out of their car next to the shop, because of the recent raid.

After she left and they saw her get back in a news car, the same man started running, according to Cooper.

However, one store manager who was less startled, said even though KCSO confiscated thousands of dollars from him during a raid on Friday, its a small hit in a bigger business plan.

"Your store is doing $7,000 a day in sales at 80 percent margin ok, now the police come in and they take $10,000 worth of stuff alright by tomorrow afternoon were even! Meanwhile they don't come back for how long? So here we are three years later I'm up $1.8 million, I mean come on do the math, the risk to the reward…the risk is minuscule to the reward," Budville Medicinal Marijuana Store Manager, Steve Duce said.

Steve Duce has been distributing cannabis for four years in Kern County and he said the demand is just too high for anything to change.

When Cooper asked him, "How do you know that..?" Duce responded by saying, "It's my business ..why would I not know it."

Cooper countered back by asking, "How many would you think there are?"

Duce said his old medicinal store front called, "Budville," moved to the black market in May after the county ordinances banning the sale and purchase of medicinal and recreational marijuana took effect.

"We did close' we weren't open for people to just walk in here, everything and anything I did was through delivery service."

He said his old Budville store that was raided last week was merely a storage unit for his product, "There's no fear…what are they going to do? Come in and take your stuff, Ok I got more at home….Take my money? Ok that won't happen again because I won't keep anything here..every 20 minutes someone will come by and pick it up."

KCSO said when they confiscate products and money it goes through a judicial process and if the state decides the money was obtained illegally, KCSO can then use the drug money to fund their training equipment and for community crime prevention.

However, Duce said he wouldn't mind paying to support KCSO equipment and community prevention efforts the legal way, "Why don't you just tax me and make the business legit and I'll buy you all new stuff."

Duce said others in his industry are also not worried about getting raided or how they will reopen.

"If anything they will reopen that store and open another store and keep their stuff over at that store, just in the last month I've seen ten places open."

KCSO said they are doing what they can to keep stores from sprouting up by conducting routine surveillance, popping up unannounced and citing people like Duce when they catch them operating.

State and local officials said its difficult to keep a lid on these shops because they are dealing with a resourceful group and they usually can't track down the owner.

However, Duce said even if the cops lock up the owners it's a minor set back, "Mike and I went to jail, we both got a couple felonies, couple misdemeanor charges, my bail was $30,000."

Duce said days later the owner is back in the game and their marijuana business is running smoothly once again.

Cooper then asked Duce, "So are you planning to start selling to your medicinal customers again?"

Duce responded by saying, "No…"

Cooper said, "Are you saying that because you are supposed to say that?"

Law enforcement agencies said they are going to continue to work to close down these shops.