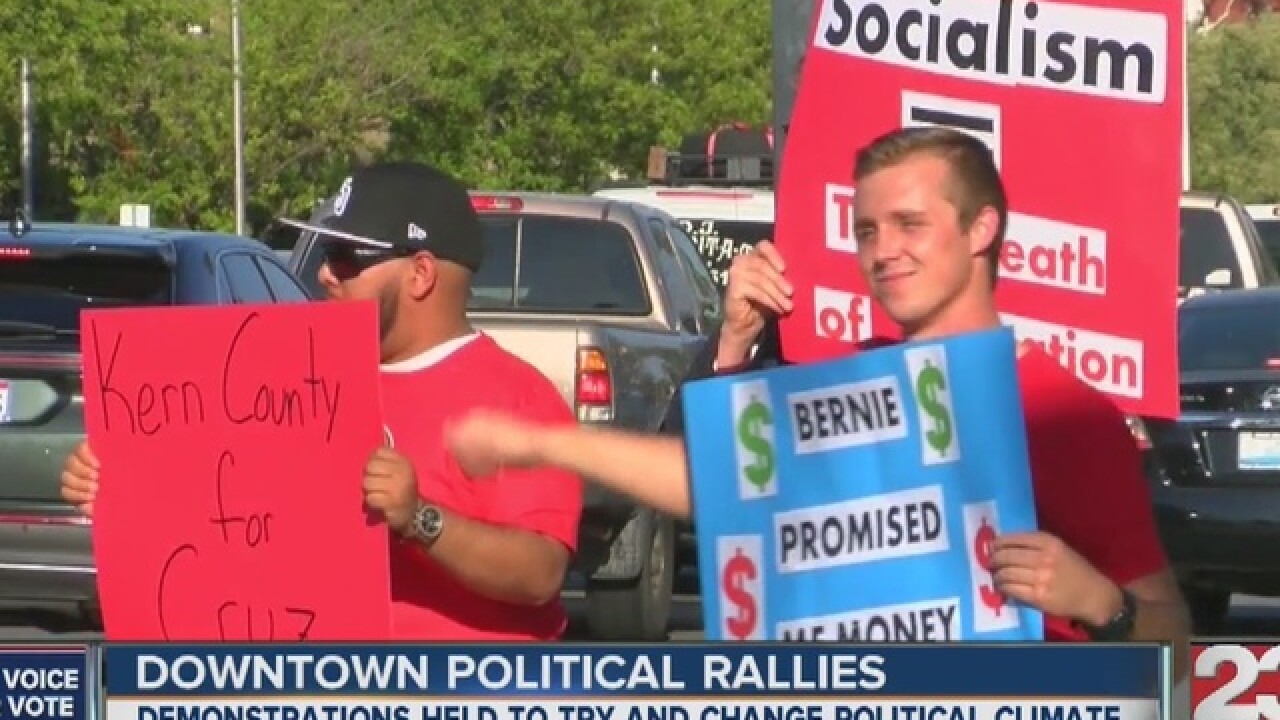 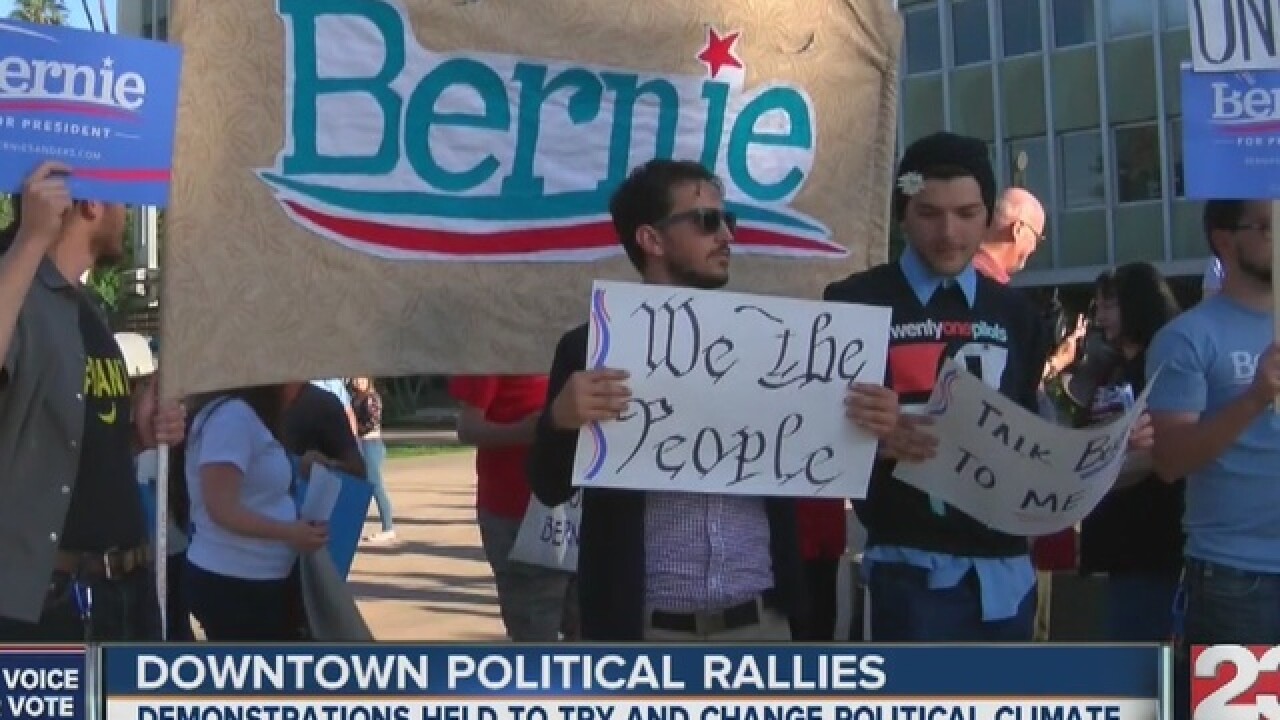 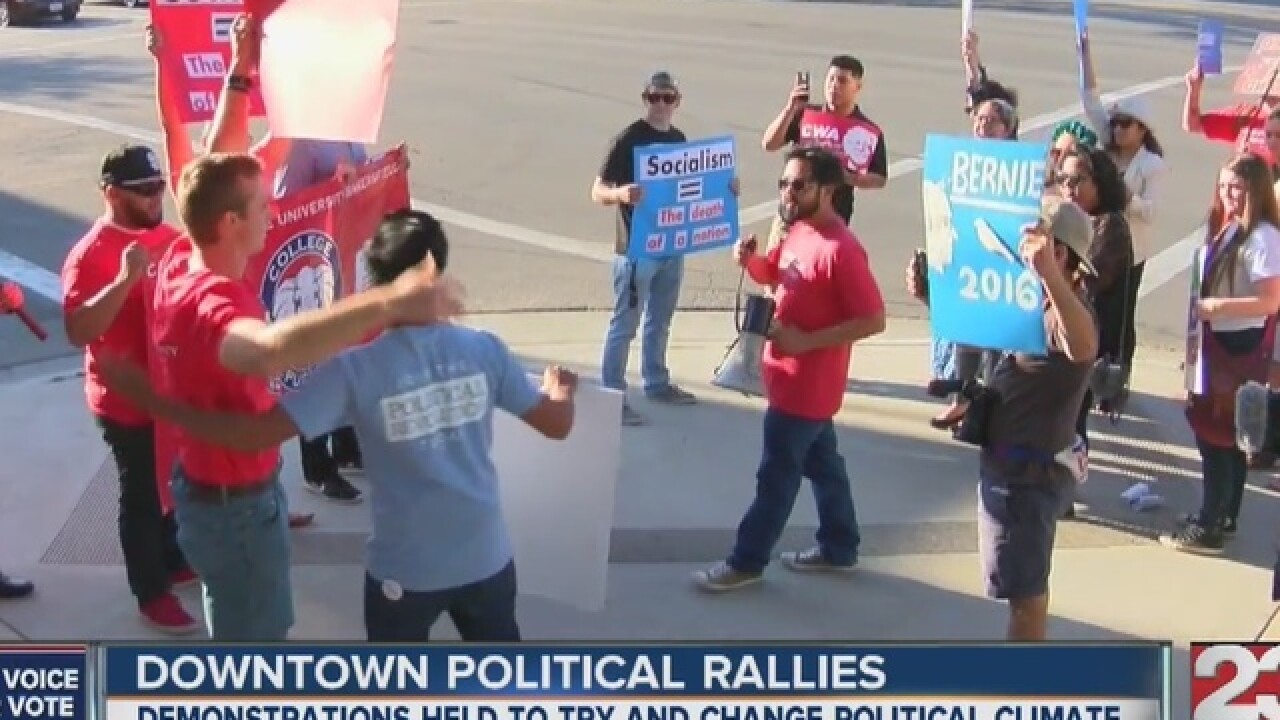 On Friday supporters and protestors of presidential candidate Bernie Sanders took to the streets in a peaceful manner, showing support for their voting party.

Arriving to the steps of City Hall just after 4 p.m. students like Kevin Reed and Nayeli Sanchez, from CSUB’s College Republicans group, calmly greeted drivers as they passed by, showing support for their party of choice.

“Donald Trump is bringing a lot of voters out, you know Ted Cruz is bringing out a lot as well. The fact of the matter is that we've got three strong candidates on the GOP side,” said Reed.

“Well thankfully this year in the Presidential election, California is actually going to matter a great deal. So that's important for us to get all of our individuals tat can vote to go out and vote,” said Sanchez.

And even though the protest was peaceful-- stances on certain hot topics -- read loud and clear.

“They give too many handouts out. The problem with that is just people get dependent, people get complacent and people don't want to go out and work. And we've lost sight of the American dream because of that,” said Reed.

Meanwhile a block away supporters, like Sandy Reding and Neel Sannappa, of the Democratic candidate Bernie Sanders prepped for a march that took them through downtown.

“We wanted to come out here and show that Bakersfield can be a place that really is progressive,” said Sannappa.

But the highlight for many on a day filled with freedom of speech, was when the two groups came together to recognize each other's efforts.

“Thank you, thank you for practicing your First Amendment right today. It's about getting people involved in politics and that's what it's about. We knew we could make this peaceful and we are and it's beautiful,” said Sannappa.

Leaving many like Michael Jennings in good spirits knowing that both sides are able to believe what they do, but can still get along.

After the rallies came to an end members of both sides made sure to include that they respected one another for the way the marches were handled, saying this is what our country was founded on and they are glad they could do things peacefully.