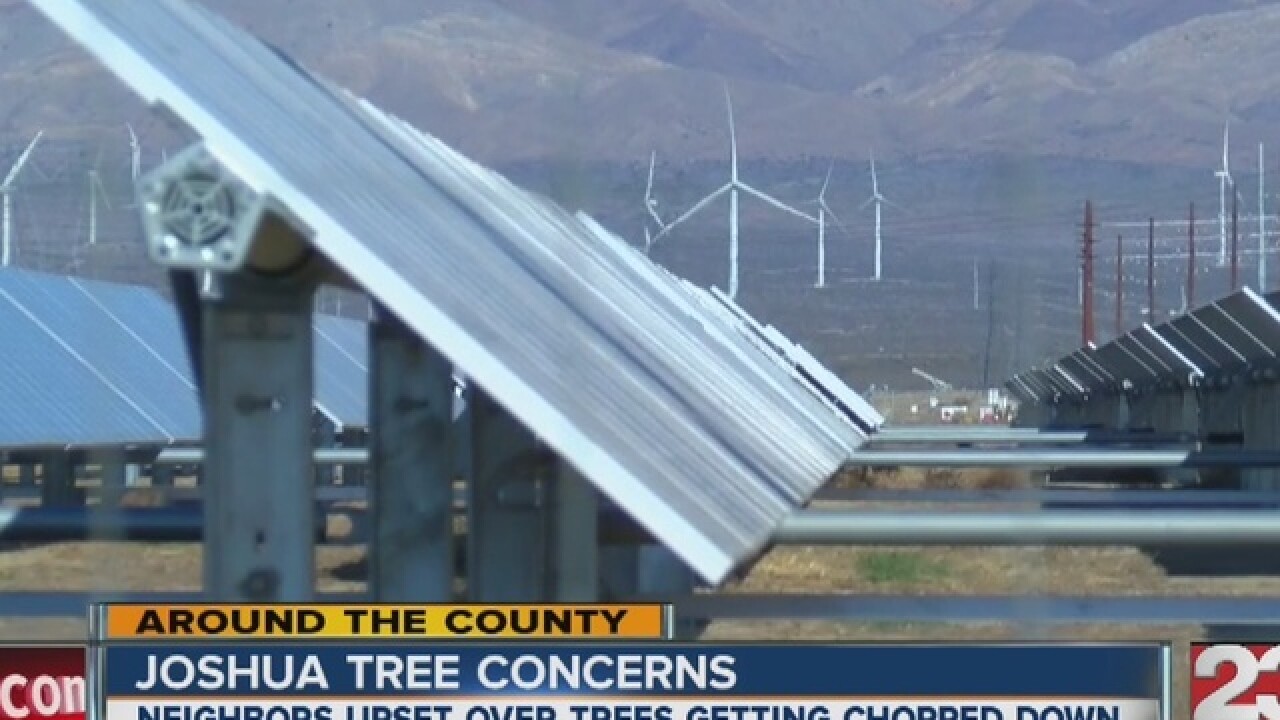 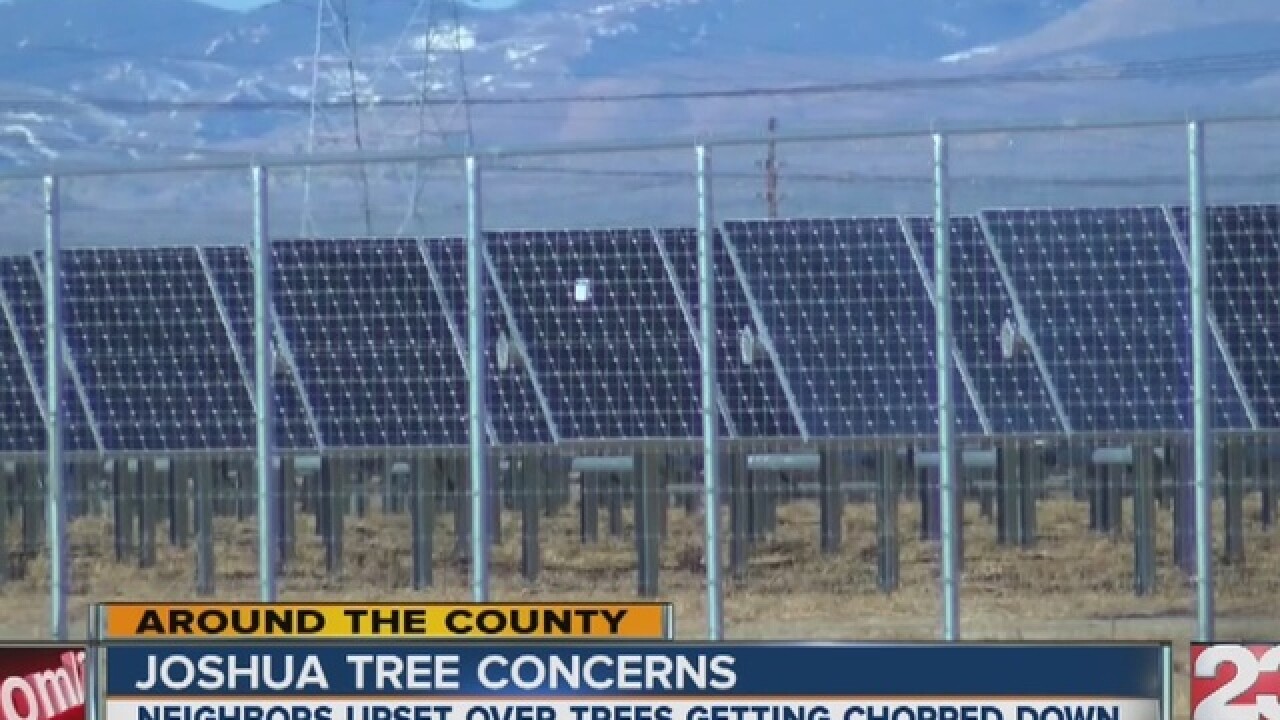 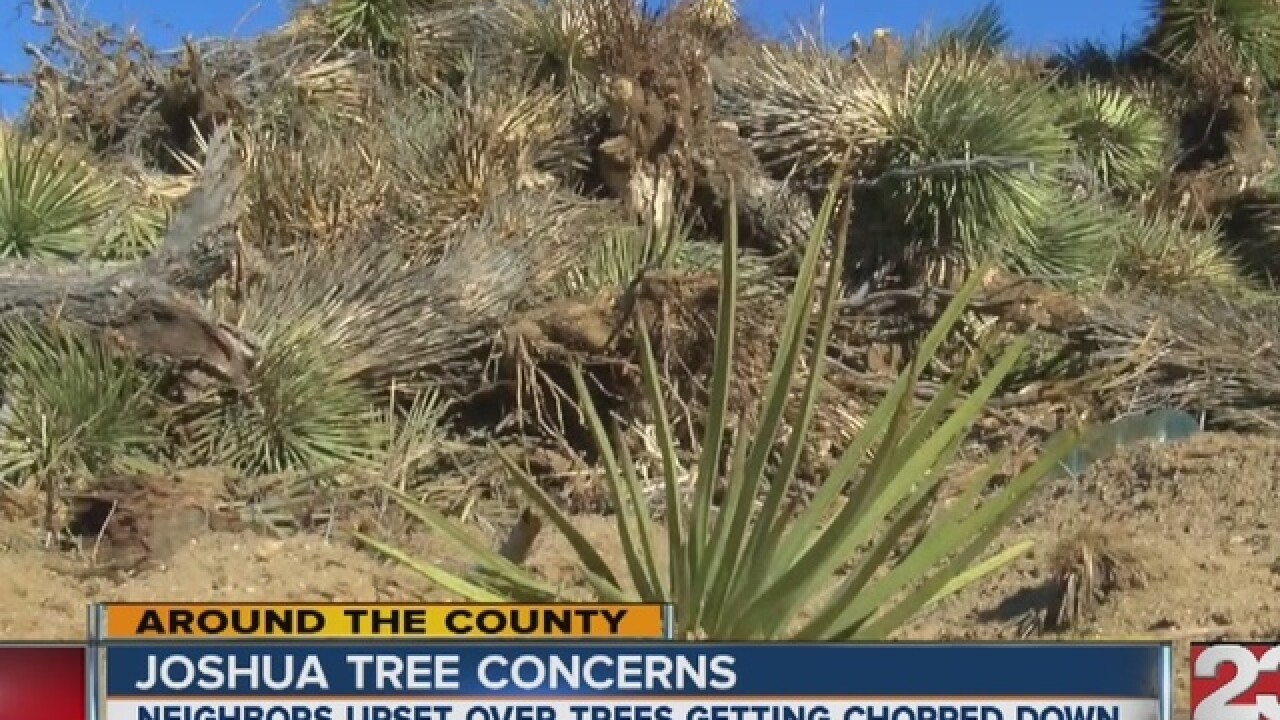 Residents in the Rosamond area are outraged after hundreds of Joshua Trees were chopped down, to make way for solar projects.

"They're clearing them off, killing them real quick and now they're grinding them up getting rid of all the evidence," Randy Widmer said.

When it comes to whether or not the trees are protected, it depends on where they're located. In places like the Mojave Desert or Joshua Tree National Park, the trees are protected. Out in the Rosamond area companies have to do an environmental impact report that is presented to the Kern County Board of Supervisors.

Reccurent Energy is one of the companies building out in that area, they have gone through all of the proper channels to take down the Joshua trees, according to the papers submitted to the Board of Supervisors.

Some residents like George Lujan say the construction doesn't bother them personally, and they don't care about the trees being cut down. Lujan said his family and friends knew for years that the project was coming.

Widmer said it's about more than just the trees, he's concerned about the ecosystem out there as well.

"I've lived out here for 45 years steady, i've never seen a mountain lion out here a couple weeks ago i saw one, where they tore out his Joshuas, where he lived," Widmer said.

Construction is planned along Gaskell Road to 240th Street, though residents nearby fear solar companies will try to continue to expand.

"There's thousands of other acres out here, that are already level, they already farmed it. If they had to do it, do it there," Widmer said.

23ABC reached out to Reccurent Energy, who is working on two projects in the area, and they responded with this information:

When did you break ground on  the solar projects in the Rosamond area?

When did you first notify those in the area? How?

When any solar project is developed in Kern County, nearby residents are notified by mail at the beginning of the project’s permitting process. Per the requirements of Kern County, residents have an opportunity to comment on the Environmental Impact Report (EIR) that is conducted for each project, and are also invited to attend County hearings on the project.

Where will the energy harvested be going? Once operating, the projects will provide power to multiple utility companies, including Southern California Edison (SCE).

The Astoria and Garland projects are collectively expected to spend more than $90 million locally on labor, construction materials and services, and will generate tax revenue for Kern County.

Both projects also generate what’s known as indirect and induced economic activity. This includes local sales of equipment, materials, fuel, security services, and spending by project employees for housing, transportation and other needs.

Once operating, both projects will generate 375 megawatts (MW) of clean, solar power, the equivalent of taking roughly 90,000 cars off the road.\

Are you looking to expand the project past 240th Street? The Garland and Astoria projects do not expand past 240th Street; future development opportunities may.  Any future project would be subject to the same County permitting and environmental approval process as past solar projects in Kern.